Ever since the YSR Congress Party came into power in Andhra Pradesh, there have been numerous cases all over the state where the police have been in the headlines for the wrong reasons.

When crimes rise in society, people expect the police to safeguard them. But if the police become a threat to the public, who will offer protection to the society? Ever since the YSR Congress Party came into power in Andhra Pradesh, there have been numerous cases all over the state where the police have been in the headlines for the wrong reasons. Some have taken the law into their own hands and used brutal force to attack the public under the pretext of some petty crime. Legally, this is an offence. Apparently the police do not seem to care. Perhaps, they are mere puppets controlled by someone who pushes them to use violence to threaten enemies. 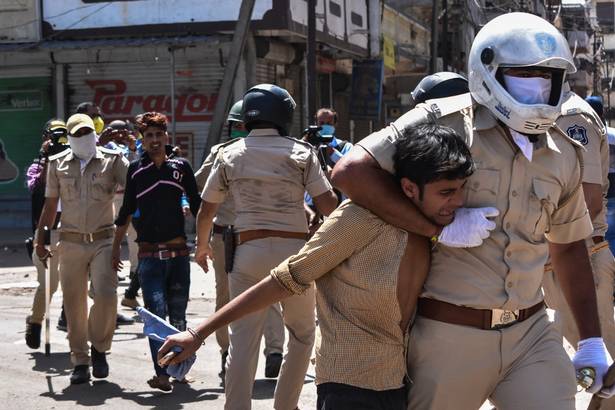 A young man was on his way home, riding a motorcycle in early April, when the country was under lockdown due to coronavirus. He had travelled 300 kilometres so far and had to cover another 100 kilometres to reach his village, Puttacheruvu of Kaikalur madal in the Krishna district. As he reached a district border, he was stopped by police who beat him up, registered a case against him and let him go. The young man who was later identified as Peddada Srinivas Rao did not make it home. He chose to hang himself from a tree, but not before recording a video of himself in tears and blaming the police for his untimely demise. This video was sent to his friends and relatives and eventually grabbed the attention of the press. Otherwise, the death of this young man would have remained unknown. He could not withstand the mental agony of being detained by the police when all he wanted was to go home to safety.

Those who do manage to withstand the brutality of the police are termed 'mental' as in the case of Dr Sudhakar Rao, an anaesthetist who worked at a government hospital in Visakhapatnam with about 20 years of medical experience. In a meeting with the local Municipal Commissioner, he had questioned the shortage of N95 masks and PPE kits for doctors treating patients with the coronavirus. He had stated that the doctors were asked to use each mask for 15 days before requesting a new one. A video of him questioning about how one can work in such conditions while risking one's life went viral and he was soon suspended from work. A few days later, he was driving his car in Visakhapatnam when he was stopped by the police, dragged out of his car, beaten up with his hands tied and then dragged into an vehicle and driven away. The video of him lying on the road with his hands tied went viral. The details were not clear, though. However, Dr Sudhakar had told the local journalists gathered around him that the police had taken away his wallet and mobile before beating him up. During the altercation, Dr Sudhakar had hurled abuses against the chief minister, the government and the police and allegedly snatched the mobile phone from one of the cops trying to control him. He was soon lodged in a government mental hospital for 21 days after the police and the doctors at the hospital he was at declared him mentally disturbed. At the mental hospital, he was given medicines that were not necessary and soon began to affect his health. After a few petitioners alleged that the doctor was manhandled, the High Court ordered for a CBI probe that led to filing of cases against some police and government employees. The High Court also gave him freedom to leave the hospital.

The High Court and CBI's involvement in the above case of Dr Sudhakar drew flak from the YSRCP leader and former Chirala MLA Amanchi Krishna Mohan who commented that this was a petty case and that CBI need not have got involved. In other words, this is a contempt of court. However, he is just one of among the YSRCP leaders who brazenly criticised the judiciary. The party's Rajya Sabha MP and the party's social media wing in-charge, Vijay Sai Reddy has claimed that his party would protect the social media team members who were issued contempt notices by the High Court for making objectionable remarks about the judiciary. He glorified his team of social media members as warriors and soldiers instead of directing them to exercise caution while creating the posts. Apparently, the party does not apply the same principle to those posting social media posts against it.

Freedom of Expression Goes For a Toss

Take the case of Mr Nalanda Kishore, a social media activist and a close aide of the Visakhapatnam (North) TDP MLA Ganta Srinivasa Rao, who passed away in July, 2020. A week before his death he was arrested on the charge of sharing several 'objectionable posts' on a social media platform against YSRCP MP Vijaya Sai Reddy and Tourism Minister M Srinivasa Rao. The activist, in his late 60's, was taken down the road for hundreds of kilometres from Visakhapatnam to Kurnool, despite his ailing health, through several districts when the state was under lockdown due to the coronavirus. He was produced in court and later released on bail. The mental and physical stress he underwent eventually led to hospitalisation and death, all for sharing a post on social media. Similarly, a 60-year old woman was arrested by the CID for posting a comment against the government regarding the leakage of toxic gas from the LG Polymers plant in Visakhapatnam that led to the loss of several lives. She was later released on bail. However, such ill treatment is not meted out to those YSRCP leaders who also circulate posts against the TDP. Even the press is not spared by the YSRCP. Two Telugu dailies, Eenadu and Andhra Jyothi have been sent legal notices for their articles carrying statements by Jagan Mohan Reddy alleging irregularities in restoration of mining leases to Saraswati Power in the Guntur district and in granting a contract to a company for the production of bags for door-to-door supply of rice to consumers.

Now and then, the ruling government tries to pacify and suppress an issue with financial power. The chief minister, Jagan announced a compensation of Rs 10 lakh for a 25-year old Kiran Kumar, a dalit who died of injuries after he was stopped and questioned by the police in Chirala for not wearing a mask. He and a friend were on a motorcycle and appeared in a drunken state, according to the police. They assaulted a cop during the interrogation and the sub-inspector was called in and he took them into custody. As the young men were being driven to the station by jeep, Kiran Kumar jumped out of the jeep and fell down, injured his head and died after being admitted to hospital.

Another dalit was allegedly beaten up by the police with a belt at a police station in East Godavari district. Then, they summoned a barber to shave his head and forcibly remove his moustache. The previous night, the victim and three others had stopped the movement of sand trucks in the area of his residence because of a death in that lane. He had asked the truck drivers to wait for a while until the corpse was taken away for the last rites. Soon, a local YSRCP MLA came to the scene and picked up an argument. The next day a sub-inspector and two constables came to take away the young men for enquiry to the police station. The victim had to be hospitalised at the Rajahmundry government hospital. Eluru range Deputy Inspector General said a case had been booked against the sub-inspector and two others under Section 324, 323 and 506 of Indian Penal Code and also under SC/ST Atrocities (Prevention) Act.

Besides constables, the higher officials also tend to forget their duty to uphold justice. The Andhra Pradesh Director General of Police (DGP), Damodar Gautam Sawang, was summoned by the Andhra Pradesh High Court in March 2020, to explain why he did not take disciplinary action against his subordinate officers who detained the Telugu Desam Party President N Chandrababu Naidu at the Visakhapatnam airport after he was taken into preventive custody. Mr Naidu had come to the city to attend a series of programmes and had applied for permission prior to arrival. The DGP was made to read the Criminal Procedure Code (CrPC) Section 151 and let off with a warning that should he fail to take the action that he is supposed to take then the court would take the necessary action. Also, the court ordered the DGP to submit a report on the action taken against the officers. At times like these, the judiciary is the only ray of hope for people. When politicians decide to take the law into their hands, it is high time to evict them. Otherwise, the suffering will continue with increasing violence.