Given parents are not allowed to travel to get them back, the situation is almost impossible. Some have reportedly resorted to hiring strangers to help get their kids home. As desperate parents seek alternative solutions, young people may become prey to strangers while in transit.

The latest Senate estimates hearings revealed there were more than 200 Australian children stuck in India without their parents, up from 173 last month.

Department of Foreign Affairs and Trade secretary Frances Adamson says diplomats have a “steely determination” to bring these children back to Australia. Yet more than one year into the pandemic, the government is not able to provide a timeline for their return, other than “as soon as possible”.

While there has been attention given to Australians stranded overseas, much of this has related to adults.

What does human rights law say about children in this situation?

According to the latest figures, some 35,128 Australians overseas are registered as wanting to come home. Of these, 10,994 are in India, including 209 children.

The government has arguably tried to downplay their vulnerability. Foreign Minister Marise Payne told estimates last week some of the children registered had arrived in India this year, some had never been to Australia and others had arrived there as far back as 2008. While they have been described as “unaccompanied minors”, the government has stressed they are staying with extended family — and not literally on their own.

They are, however, separated from parents in Australia — or not where their parents want them to be.

Last week, we heard once more how demand for repatriation flights continues to outstrip capacity. The situation for children is particularly bleak. Minors under 18 are not allowed on commercial flights without a nominated adult accompanying them — including for the quarantine period.

Given parents are not allowed to travel to get them back, the situation is almost impossible. Some have reportedly resorted to hiring strangers to help get their kids home. As desperate parents seek alternative solutions, young people may become prey to strangers while in transit.

The legal situation for those overseas

The International Covenant on Civil and Political Rights guarantees a person the right to leave and return to their own country freely. The government cannot arbitrarily deny this right.

In March 2021, a group of Australian citizens stranded in the United States lodged a complaint with the United Nations Human Rights Committee. According to the group’s lawyer, Geoffrey Robertson,

International law recognises the strong bond between individuals and their homeland and no respectable government would impose travel caps to prevent, for over a year, its citizens from returning if they are prepared to do quarantine.

The UN’s Human Rights Committee has already urged Australia to ensure their “prompt return” while the case is considered.

But as Australia does not have a bill of rights, the lawfulness of the repatriation policies may not be able to be challenged in our domestic courts.

Children have extra rights due to their vulnerability — and these are highly relevant to the situation of those stranded in India. Critically, the Convention on the Rights of the Child says children

shall not be separated from his or her parents against their will.

The only exception would be if relevant authorities determine it is in the best interests of the child.

At the same time, the International Covenant on Civil and Political Rights guarantees every child the right to acquire a nationality and receive protection as a minor. Meanwhile, the International Covenant on Economic, Social and Cultural Rights guarantees the state shall provide the “widest possible” protection and assistance to families. This is “particularly” the case when families have dependent children.

The Australian government will have to account for itself as part of its regular reports to the United Nations Committee on the Rights of the Child. Australia submitted its most recent report in 2018. Its next report is due in 2023.
However, the only possible repercussions will be international condemnation — no sanctions apply.

Policy and debate during COVID has seen a harsh and sometimes punitive tone taken on Australians stuck overseas — particularly when it comes to those in India. At times, Australian-Indians have even been blamed for COVID outbreaks or been portrayed as selfish for wanting to travel.

This shows a misunderstanding of our deep connections to India and of Indian cultural practices. 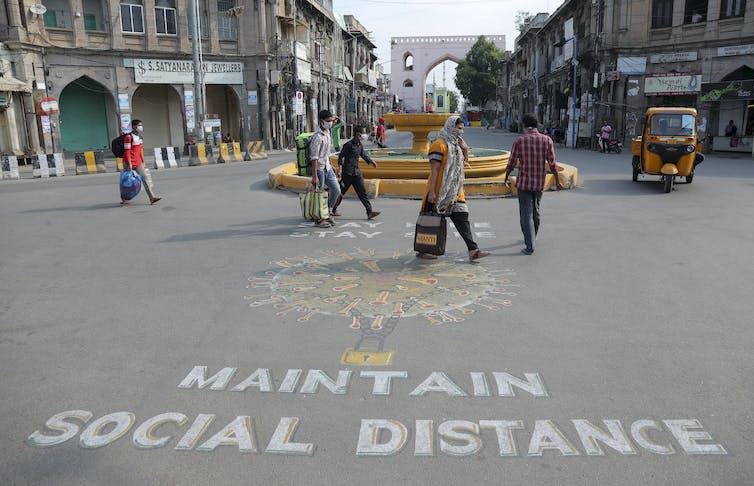 India has been severely hit by a second COVID wave since March 2021. Manesh A Kumar/AP/AAP

In 2020, the Australian Bureau of Statistics reported about 2.8% of Australians come from India. This makes India the second most common country of origin for Australian residents after England (with China in third place)

Indian society is “collectivistic” - which means the group is prioritised over the individual. Family links are extremely important, so even if migrant Indians are far from their country of origin, frequent travel is prioritised to maintain these links. This includes sending children to be with relatives.

So it’s not surprising to note that with border closures in March 2020, and this year’s temporary travel ban from India, thousands of Australian citizens were left stranded in the country.

Why can’t more be done?

There is no denying there are complex logistical issues when it comes to bringing people back during a global pandemic.

But there are clear human rights reasons (beyond simple compassion) for the Australian government to introduce further measures to bring children back from India.

It begs the question of why there is not immediate action to improve quarantine capacity for this group and allow parents special permission to travel to India to collect their children with specific charter flights to bring them home.