Of all public services, health care should be the least susceptible to corruption. Yet there is ample evidence that our medical institutions have been so weakened that they are ready to crumble.

It isn’t just a question of the lack of resources and inadequacy of the health care they provide; it lies in the integrity of the medical staff themselves, and the inability of the institution as a whole to withstand political pressure.

Raghu Rama Raju, the MP from Andhra Pradesh who was tortured while in police custody in May 2021, was sent to the Guntur Government Hospital by the magistrate to obtain professional confirmation that his injuries were the result of violence. He was examined by a medical board, headed by the hospital Superintendent, who submitted a report to the High Court. According to their testimony, Mr Raju was uninjured and in good health.

Raju himself tells a different story. He was not given an examination at all. In other words, the medical board at the government hospital lied.

He was unable to walk at the time, and photographs show the marks of beating on his feet and scars from the hot wires that were tied around his legs. It doesn’t take a medical degree to see that such marks were the result of what are euphemistically termed “third degree methods”. Yet the doctors stated that he had no injuries.

Ketan Desai, President of the Medical Council of India, found guilty of corruption in 2010 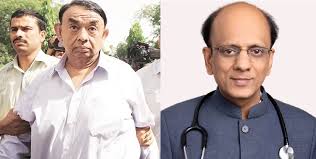 A government hospital should be a reliable source of evidence. An establishment of medical expertise that can be trusted. In this case, it was clear to the judiciary that the government hospital was lying to protect the interests of those in power, and they took the decision to send Mr Raju to a private hospital in the neighbouring state to get a second opinion.

This example is a clear illustration of the moral decay of our medical institutions. A private hospital is free to speak the truth, while a government hospital is not. It is a tool of the ruling party.

So why can’t the medical profession stand up to pressure from politicians?

Years of neglect have left the health system in ruins: India spends far less than most countries on health care, at around 1% of its GDP. Equally destructive, the absence of proper checks in the regulatory system has opened to door to corruption on a grand scale, from the highest level of government to the everyday bribes that patients are forced to pay medical staff during routine hospital visits.

The decay goes back a long way. In 2010, the High Court dismissed Ketan Desai, the President of the Medical Council of India (MCI), from his post when he was found guilty of corrupt practices and abuse of power. The MCI was, until recently, the government authority responsible for the overall regulation of medical education and practice. It operated more like a business than a regulatory body, however, and it became common practice for medical colleges to illegally extort extra fees from students. This set the cycle of corruption in motion, as graduate doctors sought to recover the huge investment they have had to make in their education by over-charging patients or ordering unnecessary tests.

In 2014, the BJP’s new Health Minister, Dr. Harsh Vardhan, publicly stated that the MCI was corrupt, and in September 2020 the institution was scrapped altogether and replaced by the National Medical Commission. But it has been too little, too late.

Institutional rot exposed by the pandemic

Hospitals have been overwhelmed by the pandemic 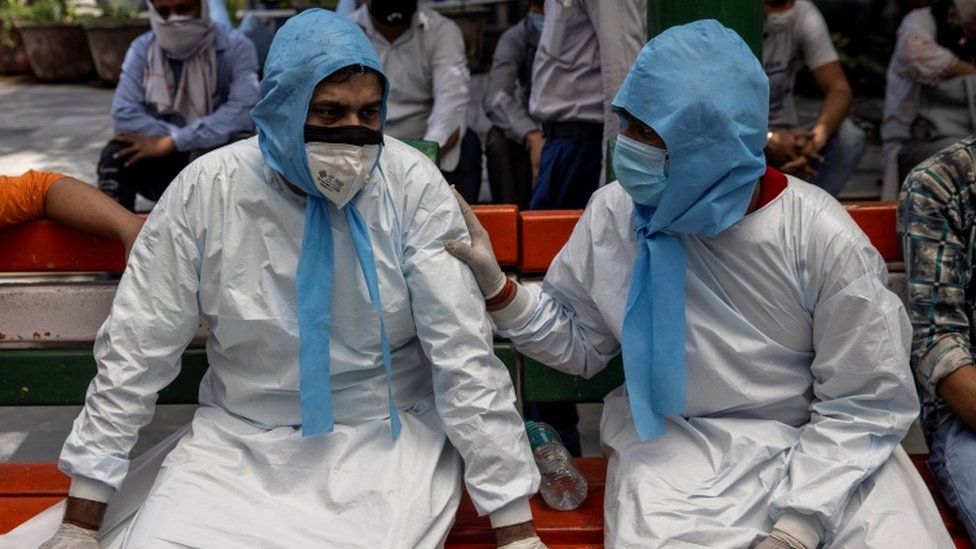 The COVID-19 pandemic has revealed the dire state of public healthcare across the country. In extreme cases, health facilities that appear to exist on paper are entirely fabricated: in Bihar, for example, a number of primary health centres are so run-down that they are not functioning at all. One is currently used as a cattle shelter. Others are permanently locked or only open infrequently. “Doctors, nurses and sanitation workers are also appointed to this facility but they’re not present here. They only come once a month,” one local told the Asian News International news agency.

Only the very rich have been able to side-step the horror of dealing with public health services over the past few months. The government health helplines you can call in an emergency, but with no one to answer the call. The impossibility of finding a hospital bed when a relative is struggling to breathe. The desperate rush from one hospital to another in search of oxygen or a ventilator.

Many doctors have acted heroically, barely sleeping as they fight to save the lives of patients despite often lacking the PPE they need to keep themselves safe. But others have profited from the tragedy, selling drugs and oxygen at hugely inflated prices on the black market, and overcharging for treatment.

This is only possible because the infrastructure has crumbled; the medical sector, which should be one of the central institutions in the country, is an unregulated shambles.

Hope from within the medical establishment

Doctors and medical institutions have begun speaking out against Modi 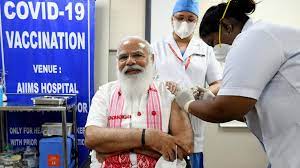 In India today, corrupt political leaders call the shots. If they want revenge on a dissident MP like Raghu Rama Raju, they will stop at nothing to get it. That includes exerting pressure on the medical board in a government hospital to give false testimony in a court of law. And there is no backbone left in the medical establishment to stand up to such pressure.

Yet there are signs of change. One of the few glimmers of hope to emerge from the COVID-19 pandemic comes from the medical establishment, as increasing numbers of doctors and other medical staff are speaking out against government policies and inadequate resources for medical care.

Individual voices can be silenced, as in the tragic case of Dr K Sudhakar, who criticised the lack of PPE and was subsequently arrested and sent to a mental institution, later dying of a heart attack at the age of only 52. Or oncologist Indranil Khan, who shared images of doctors forced to wear raincoats in the COVID-19 ward instead of PPE and was detained by police the following day. He was charged with causing “communal disharmony” and only released after he agreed to post on social media that the state government was helping doctors.

As a result of the dire political mishandling of the pandemic, however, more powerful voices in the medical establishment are speaking out. Dr Navjot Dahiya, the vice-president of the Indian Medical Association, criticised Narendra Modi for failing to seize the opportunity to strengthen the health system before the second wave of the pandemic, and for being a “super-spreader” during his political rallies around the country. And the Indian Medical Association itself issued an official statement condemning the Ministry of Health for its response to the pandemic.

When such powerful professional associations finally speak out against the government, there is hope for change: for more investment in health care, and stricter regulation of the medical profession to eliminate corruption at every level.

If, one day, this becomes reality, there is a chance that the justice system will once again be able to rely on evidence provided by the medical board of a government hospital.