These are questions scientists don’t have definite answers to yet. Many think it’s likely you would just keep passing galaxies in every direction, forever. In that case, the universe would be infinite, with no end.

What is beyond outer space? – Siah, age 11, Fremont, California

Right above you is the sky – or as scientists would call it, the atmosphere. It extends about 20 miles (32 kilometers) above the Earth. Floating around the atmosphere is a mixture of molecules – tiny bits of air so small you take in billions of them every time you breathe.

Above the atmosphere is space. It’s called that because it has far fewer molecules, with lots of empty space between them.

Have you ever wondered what it would be like to travel to outer space – and then keep going? What would you find? Scientists like me are able to explain a lot of what you’d see. But there are some things we don’t know yet, like whether space just goes on forever.

At the beginning of your trip through space, you might recognize some of the sights. The Earth is part of a group of planets that all orbit the Sun – with some orbiting asteroids and comets mixed in, too. 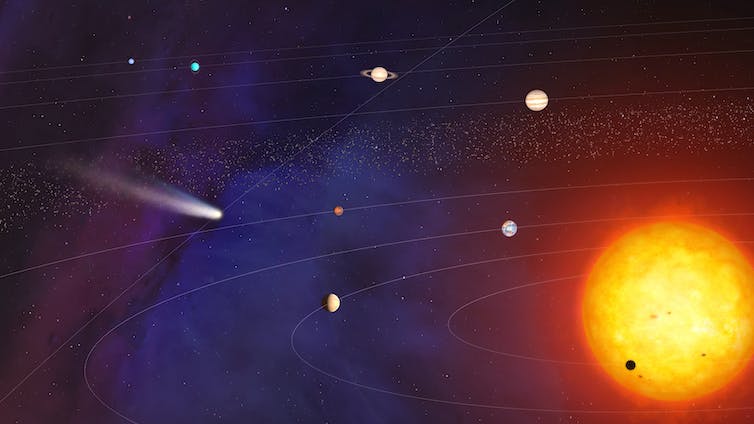 You might know that the Sun is actually just an average star, and looks bigger and brighter than the other stars only because it is closer. To get to the next nearest star, you would have to travel through a billion miles of space. If you could ride on the fastest space probe NASA has ever made, it would still take you thousands of years to get there.

Recently astronomers have learned that many or even most stars have their own orbiting planets. Some are even like Earth, so it’s possible they might be home to other beings also wondering what’s out there. 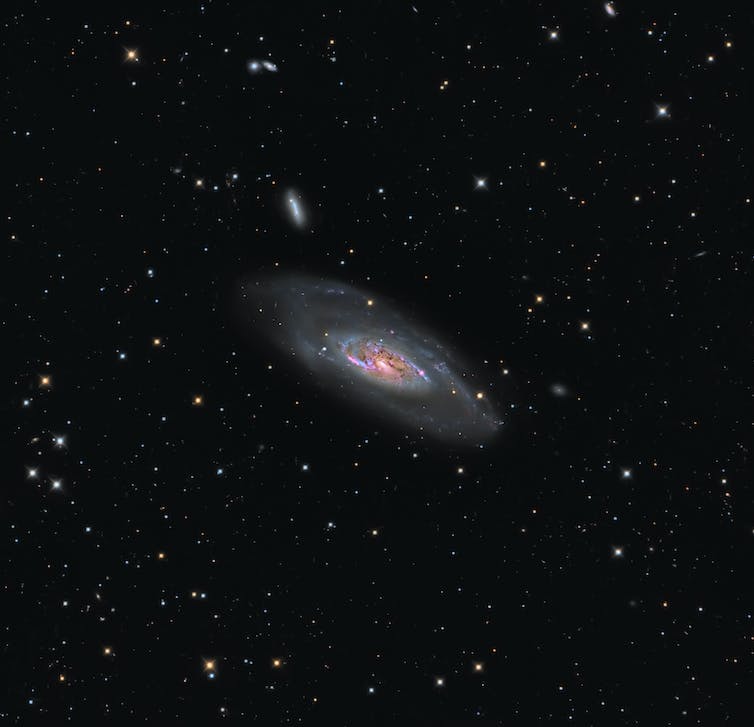 A galaxy among many other galaxies. Michael Miller/Stocktrek Images via Getty Images

You would have to travel through 6 trillion miles of space just to reach another galaxy. Most of that space is almost completely empty, with only some stray molecules and tiny mysterious invisible particles scientists call “dark matter.”

Using big telescopes, astronomers see millions of galaxies out there – and they just keep going, in every direction.

If you could watch for long enough, over millions of years, it would look like new space is gradually being added between all the galaxies. You can visualize this by imagining tiny dots on a deflated balloon and then thinking about blowing it up. The dots would keep moving farther apart, just like the galaxies are.

Is there an end?

If you could keep going out, as far as you wanted, would you just keep passing by galaxies forever? Are there an infinite number of galaxies in every direction? Or does the whole thing eventually end? And if it does end, what does it end with?

These are questions scientists don’t have definite answers to yet. Many think it’s likely you would just keep passing galaxies in every direction, forever. In that case, the universe would be infinite, with no end.

Some scientists think it’s possible the universe might eventually wrap back around on itself – so if you could just keep going out, you would someday come back around to where you started, from the other direction.

One way to think about this is to picture a globe, and imagine that you are a creature that can move only on the surface. If you start walking any direction, east for example, and just keep going, eventually you would come back to where you began. If this were the case for the universe, it would mean it is not infinitely big – although it would still be bigger than you can imagine.

In either case, you could never get to the end of the universe or space. Scientists now consider it unlikely the universe has an end – a region where the galaxies stop or where there would be a barrier of some kind marking the end of space.

But nobody knows for sure. How to answer this question will need to be figured out by a future scientist.