School districts and officials were anxious for guidance about the extent to which they can police social media speech by their students, especially with heightened concern about cyberbullying and threats of school shootings.

For decades, U.S. courts have ruled that public school students “do not shed their constitutional rights to freedom of speech and expression at the schoolhouse gate,” as the Supreme Court said in 1968.

In that case, Tinker v. Des Moines Independent School District, the justices held that high school students who were suspended for protesting the Vietnam War by wearing black armbands to school were protected by the First Amendment’s guarantee of free speech.

The standard the court set then, which has been narrowed and focused over the years, was that schools could only punish students for speech that “materially and substantially” disrupted the educational mission of the school. In several subsequent cases, about a student campaign speech full of sexual innuendo, a school newspaper article on teen pregnancy and a student-created sign saying “Bong Hits for Jesus”, the Supreme Court evaluated speech or expression that took place on campus or at a school-sponsored event. And in every case, the justices deferred to school authorities on their judgment of what disrupted their educational mission.

A case the court took up this year provided an opportunity for a wider view, specifically about what protections students might have for speech they engage in off-campus and away from school events, including online.

School districts and officials were anxious for guidance about the extent to which they can police social media speech by their students, especially with heightened concern about cyberbullying and threats of school shootings.

Free speech advocates were worried about the extent to which schools can extend their reach and control over students outside of school grounds and hours, especially given the amount of time teens spend on social media.

The June 23, 2021, decision in that case, Mahanoy v. B.L., is both a win and a loss for both sides. The 8-1 ruling, with Justice Clarence Thomas dissenting, did not give either side the clear rules they may have wanted.

It says schools are not forbidden from disciplining students in cases of severe harassment and cyberbullying that happen outside school. But it does warn schools that their attempts to regulate off-campus speech will be treated with less deference than they would get when addressing events on campus. 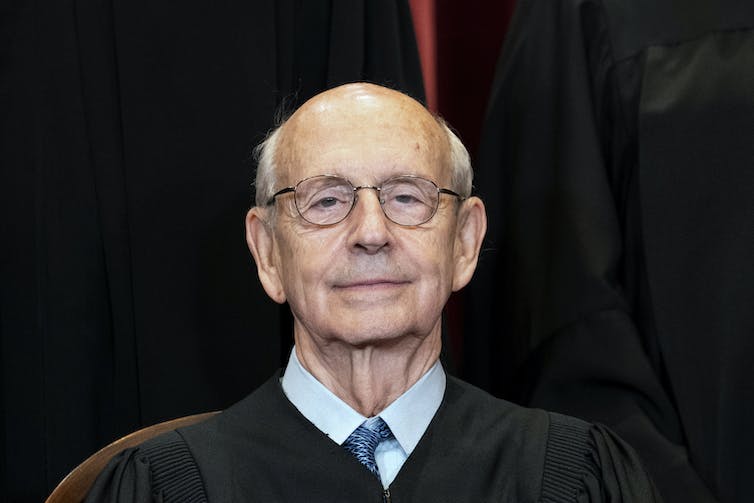 Associate Justice of the Supreme Court Stephen Breyer wrote the majority opinion in the case, saying a ‘school will have a heavy burden to justify intervention’ in student speech made off campus or outside school programs. Pool/Associated Press

The case centered on Brandi Levy, who was a high school sophomore in 2017 when she failed to make the varsity cheerleading team at Mahanoy Area High School. She did make the junior varsity team, but expressed her disappointment at not making the top squad through a crude Snapchat post involving raised middle fingers and multiple uses of the F-word.

She made the post over the weekend, from a location outside the school campus. Several members of the cheerleading squad saw the post and reported it to officials, who suspended her from cheerleading for violating team-conduct rules. Levy’s parents sued on her behalf, arguing under the First Amendment that the team rules were overbroad and unconstitutionally vague, and that the school had no authority over her off campus speech.

The federal district court that first heard the case concluded that Levy’s post did not create the sort of substantial disruption to education that the Tinker ruling’s standard demanded. The Court of Appeals for the Third Circuit held that Levy’s speech happened off campus and outside a school-sponsored event, so Tinker’s standard didn’t apply.

The school district appealed to the Supreme Court, noting that the appeals court ruling conflicted with other rulings around the country that had applied the Tinker precedent to off-campus speech.

The Supreme Court agreed with both lower courts that the school had violated Levy’s First Amendment rights. But it disagreed with the appeals court’s reasoning that the Tinker case would not apply to off-campus speech.

In the majority opinion, Justice Stephen Breyer wrote that the court “did not believe the special characteristics that give schools additional license to regulate student speech always disappear when a school regulates speech that takes place off campus.” At minimum, the ruling explains, schools must have the authority to regulate bullying, harassment, threats directed at staff or students, online learning and assignments and cybersecurity for school systems.

But the court also expressed reluctance to let schools very broadly regulate students’ off-campus speech, fearing the effect could be severe limits on student speech any time of day or night, in any location.

Instead, the justices said courts should be “more skeptical” of schools’ attempts to regulate off-campus speech than when handling on-campus expression.

The ruling also reminded schools of their obligation to protect the expression of unpopular opinion. Schools are “the nurseries of democracy,” Breyer wrote, and have an obligation to teach their students about the importance of free speech.

As a result of this reasoning, the court found that Levy’s Snapchat post was protected under the First Amendment. It was not substantially disruptive to the school environment, wasn’t targeted at anyone in particular, was not obscene, and did not constitute “fighting words” or incitement to violence.

Breyer did observe that Levy’s word choice was vulgar and perhaps juvenile in tone, but said “sometimes it is necessary to protect the superfluous in order to preserve the necessary.”

As a result of the ruling, students don’t lose their rights when they enter through the schoolhouse gate – but neither do school officials lose all of their disciplinary power once students leave.

[Understand what’s going on in Washington. Sign up for The Conversation’s Politics Weekly.]