Tragically, more than 200 people are believed to have lost their lives, many of them construction workers at the Tapovan hydropower plant.

People survey the damage from a flash flood at the Dhauliganga hydropower project. EPA-EFE/Rajat Gupta 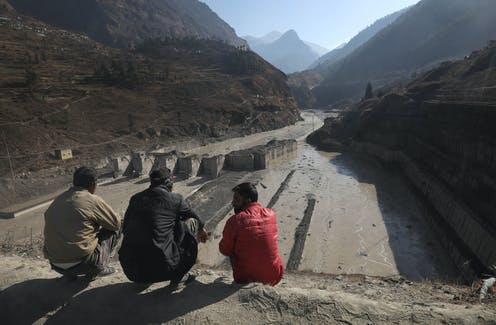 Around 27 million cubic metres of rock and glacier ice collapsed from Ronti Peak in the northern Indian Himalayas on February 7 2021, falling 1,800 metres into the valley below. The glacier ice melted as it cascaded down the mountain, mixing with rock and sediment to generate an extraordinary flow of debris that destroyed roads, bridges and two hydroelectric power stations. Tragically, more than 200 people are believed to have lost their lives, many of them construction workers at the Tapovan hydropower plant.

Though it’s always difficult to attribute any single event to climate change, rising global temperatures may have played a part in this event, known as the Chamoli disaster. And if climate change helped cause this landslide, it could threaten hydropower infrastructure globally.

Mountain regions like the Himalayas are sensitive to change. These environments tend to have steep, unstable valley walls, and earthquakes are relatively common. But climate change can tip the scales towards more frequent and higher magnitude events.

For example, we might expect more landslides where valley slopes are left without support, as adjacent glaciers thin and recede. Where permafrost thaws, it removes the icy cement that binds mountain rock and sediment together. Rising temperatures can prompt the sudden release of meltwater from growing glacial lakes, and the collapse of entire glaciers as they warm up.

So should we be nervous about developing hydropower in mountain regions if these landscapes are becoming more unstable? Well, it’s complicated. Hydropower can help reduce dependence on burning fossil fuels, and it is particularly important in the world’s high-altitude regions. Peru, for example, generates around half of its electricity from hydropower, and it continues to invest in new infrastructure.

While disasters inevitably provoke difficult questions, it’s important to keep some perspective on the sustainability of hydropower.

Hydropower in a warming world

As one of my colleagues put it: “Sometimes bedrock slopes just fail; there’s no specific trigger.” There are well-documented incidents where hydropower dams have been damaged or destroyed without any link to climate change. An infamous example is the 1963 Vajont disaster in northern Italy, where a valley wall slid into a reservoir and generated a mega-tsunami that engulfed the impounding dam, killing more than 2,500 people downstream.

The precise causes have been debated since, but it is thought that as the reservoir was being filled with water, clay-rich layers in the valley side were saturated. This wet clay would have served as a naturally weak plane along which the landslide could move.

Other energy sources and their infrastructure carry their own inherent risks – think the Chernobyl nuclear power plant, or the Deepwater Horizon oil drilling rig. Many of the world’s power stations are vulnerable to climate change because of their proximity to the coast, with many threatened by rising sea levels.

It may never have been wise to develop hydropower at the site of the Chamoli disaster. This same valley had experienced large ice avalanches in 2000 and 2016 and has seen several major floods in recent years. It is of course extremely difficult to predict if, when and where these sorts of events might occur, but this is evidently an unstable landscape.

Scientists have developed a number of ways to monitor how landscapes are changing, particularly using satellite images. We have the tools to spot warning signs and develop hydropower as safely as can be reasonably expected. Tragically though, these tools are not always used, or the warnings are ignored, as seems to have been the case at Chamoli.

There is a cruel irony that hydropower can help countries reduce carbon emissions at the same time as dams are becoming increasingly vulnerable in a climate warming as a result of those emissions. We can develop this energy source safely, but it requires careful decision making, informed by research, and with continued monitoring of changing landscapes and the climate.