We found that people often avoid discussing challenging topics online for fear of harming their relationships, and when it comes to disagreements, not all social media are the same.

There’s no shortage of research about the psychology of arguing online, from text versus voice to how anyone can become a troll and advice about how to argue well. But there’s another factor that’s often overlooked: the design of social media itself.

My colleagues and I investigated how the design of social media affects online disagreements and how to design for constructive arguments. We surveyed and interviewed 257 people about their experiences with online arguments and how design could help. We asked which features of 10 different social media platforms made it easy or difficult to engage in online arguments, and why. (Full disclosure: I receive research funding from Facebook.)

We found that people often avoid discussing challenging topics online for fear of harming their relationships, and when it comes to disagreements, not all social media are the same. People can spend a lot of time on a social media site and not engage in arguments (e.g. YouTube) or find it nearly impossible to avoid arguments on certain platforms (e.g. Facebook and WhatsApp).

Here’s what people told us about their experiences with Facebook, WhatsApp and YouTube, which were the most and least common places for online arguments.

Seventy percent of our participants had engaged in a Facebook argument, and many spoke negatively of the experience. People said they felt it was hard to be vulnerable because they had an audience: the rest of their Facebook friends. One participant said, on Facebook, “Sometimes you don’t admit your failures because other people are looking.” Disagreements became sparring matches with a captive audience, rather than two or more people trying to express their views and find common ground.

People also said that the way Facebook structures commenting prevents meaningful engagement because many comments are automatically hidden and cut shorter. This prevents people from seeing content and participating in the discussion at all.

In contrast, people said arguing on a private messaging platform such as WhatsApp allowed them “to be honest and have an honest conversation.” It was a popular place for online arguments, with 76% of our participants saying that they had argued on the platform.

The organization of messages also allowed people to “keep the focus on the discussion at hand.” And, unlike the experience with face-to-face conversations, someone receiving a message on WhatsApp could choose when to respond. People said that this helped online dialogue because they had more time to think out their responses and take a step back from the emotional charge of the situation. However, sometimes this turned into too much time between messages, and people said they felt that they were being ignored.

Overall, our participants felt the privacy they had on WhatsApp was necessary for vulnerability and authenticity online, with significantly more people agreeing that they could talk about controversial topics on private platforms as opposed to public ones like Facebook.

Very few people reported engaging in arguments on YouTube, and their opinions of YouTube depended on which feature they used. When commenting, people said they “may write something controversial and nobody will reply to it,” which makes the site “feel more like leaving a review than having a conversation.” Users felt they could have disagreements in the live chat of a video, with the caveat that the channel didn’t moderate the discussion.

Unlike Facebook and WhatsApp, YouTube is centered around video content. Users liked “the fact that one particular video can be focused on, without having to defend, a whole issue,” and that “you can make long videos to really explain yourself.” They also liked that videos facilitate more social cues than is possible in most online interactions, since “you can see the person’s facial expressions on the videos they produce.”

YouTube’s platform-wide moderation had mixed reviews, as some people felt they could “comment freely without persecution” and others said videos were removed at YouTube’s discretion “usually [for] a ridiculous or nonsensical reason.” People also felt that when creators moderated their comments and “just filter things they don’t like,” it hindered people’s ability to have difficult discussions.

We asked participants how proposed design interactions could improve their experiences arguing online. We showed them storyboards of features that could be added to social media. We found that people like some features that are already present in social media, like the ability to delete inflammatory content, block users who derail conversations and use emoji to convey emotions in text.

People were also enthusiastic about an intervention that helps users to “channel switch” from a public to private online space. This involves an app intervening in an argument on a public post and suggesting users move to a private chat. One person said “this way, people don’t get annoyed and included in online discussion that doesn’t really involve them.” Another said, “this would save a lot of people embarrassment from arguing in public.” 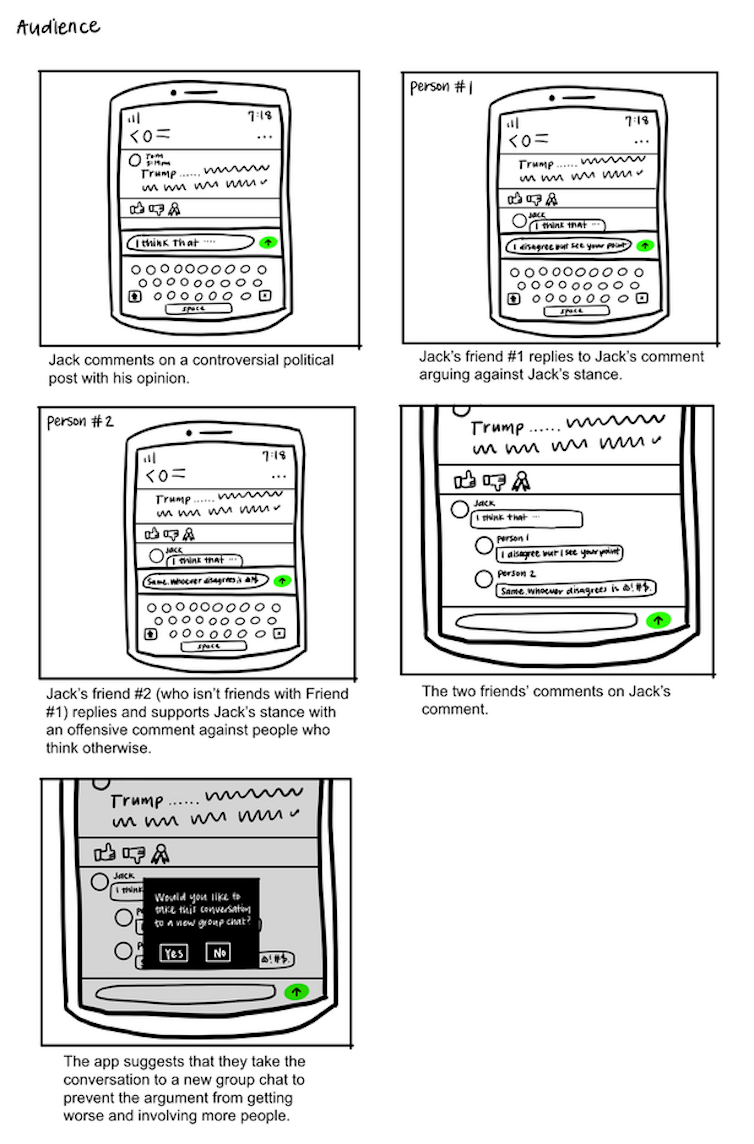 One way social media platforms can intervene: move squabbles out of public discussions. 'Someone Is Wrong on the Internet: Having Hard Conversations in Online Spaces', CC BY-ND

Overall, the people we interviewed were cautiously optimistic about the potential for design to improve the tone of online arguments. They were hopeful that design could help them find more common ground with others online.

Yet, people are also wary of technology’s potential to become intrusive during an already sensitive interpersonal exchange. For instance, a well-intentioned but naïve intervention could backfire and come across as “creepy” and “too much.” One of our interventions involved a forced 30-second timeout, designed to give people time to cool off before responding. However, our subjects thought it could end up frustrating people further and derail the conversation.

Social media developers can take steps to foster constructive disagreements online through design. But our findings suggest that they also will need to consider how their interventions might backfire, intrude or otherwise have unintended consequences for their users.