Whether this bill passes as is, or with significant changes, or not at all, its proposal signals an effort by lawmakers to reclaim power over military action and spending that Congress has gradually surrendered over decades.

In mid-July 2021, a bipartisan and ideologically diverse group of senators proposed a new bill that, if passed, would dramatically shift the relative amount of power the president and Congress have over U.S. military operations.

Whether this bill passes as is, or with significant changes, or not at all, its proposal signals an effort by lawmakers to reclaim power over military action and spending that Congress has gradually surrendered over decades. It also puts pressure on presidents to evaluate their foreign policy objectives more clearly, to determine whether military action is, in fact, appropriate and justified.

As I’ve demonstrated in my research, even though the 1973 War Powers Resolution attempted to constrain presidential power after the disasters of the Vietnam War, it contains many loopholes that presidents have exploited to act unilaterally. For example, it allows presidents to engage in military operations without congressional approval for up to 90 days.

As a result of this shift from legislative oversight to presidential control, U.S. foreign policy has become less deliberative and administrations from both parties enjoy a significant amount of control over whether the U.S. calls in the armed forces to address developments overseas.

This bill would end that loophole, requiring presidents to explain their actions more clearly to Congress and the public. Since Franklin D. Roosevelt, presidents have attempted to circumvent oversight and restraints from Congress by citing vague concerns like “national security,” “regional security” or the need to “prevent a humanitarian disaster,” when launching military operations. But they haven’t typically given Congress more concrete information about the nature of the operation or its expected duration.

The new bill sets out a clear definition of which military activities need to be reported to Congress, and how quickly. This is especially important given the ambiguities that prior administrations have exploited. In 2011, a State Department lawyer argued that air strikes in Libya could continue beyond the War Powers Resolution’s 90-day time limit because there were no ground troops involved. By that logic, any future president could carry out an indefinite bombing campaign with no congressional oversight.

The bill would also require the president to provide an estimated cost of the operation and describe the mission’s objectives – both of which could help Congress determine whether a military operation had stayed within its intended bounds or gone beyond them. 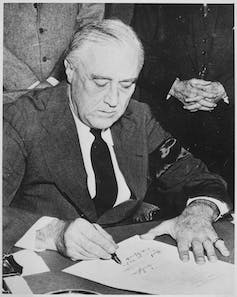 Before the Pearl Harbor attack forced the U.S. into World War II, Congress had exercised its war powers, preventing President Franklin D. Roosevelt from joining Britain, Australia and other nations in battle.

But in the wake of the attack, Congress began giving the president more control over the military, engaging in less oversight for fear of being painted as undermining the war effort.

After World War II ended, unlike in previous eras, Congress continued to relinquish those powers, largely by declining to rein in presidential actions that overstepped into congressional power.

After 9/11, Congress gave up more of its power much faster. A week after those attacks, Congress passed a sweeping Authorization for Use of Military Force, giving the president permission to “use all necessary and appropriate force against those nations, organizations, or persons he determines planned, authorized, committed, or aided the terrorist attacks that occurred on September 11, 2001.”

In a followup 2002 authorization, Congress went even farther, allowing the president to “use the Armed Forces … as he determines to be necessary and appropriate in order to defend national security” and “enforce all relevant United Nations Security Council resolutions regarding Iraq.”

In the two decades since their passage, four presidents have used those authorizations to justify all manner of military action, from targeted killings of terrorists to the years-long fight against the Islamic State group, which continues to this day. This approach provides few, if any, congressional checks on the control of military affairs exercised by the president. 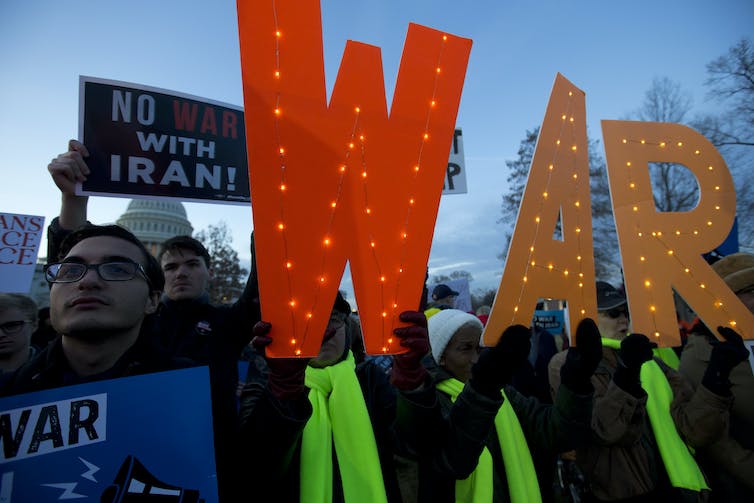 Demonstrators outside the U.S. Capitol in January 2020 called on Congress to limit the president’s powers to use the military. AP Photo/Jose Luis Magana

The Biden administration has called for more congressional oversight of military actions, saying the powers granted in 2001 and 2002 were too broad and invite abuse by power-hungry presidents.

And yet Biden has said he did not need anything beyond the Constitution to launch attacks in Syria in February and June 2021, saying he was doing so to defend U.S. forces. In mid-July 2021, Biden used the authorizations’ power to launch a drone strike in Somalia against fundamentalist al-Shabab fighters.

But perhaps the most frightening use of these broad authorities was in January 2020, when President Donald Trump used the 2002 authorization to justify a lethal drone strike against a respected member of the Iranian government, Major General Qassim Soleimani, without consulting Congress or publicly explaining why the attack was necessary, even to this day.

The killing of Soleimani, who held a position in Iran equivalent to the director of the U.S. CIA, was described by the Trump administration only as “decisive action to stop a ruthless terrorist from threatening American lives.” Trump’s subsequent promises that Iran would “never” have a nuclear weapon were also backed up by the idea that Congress had effectively authorized him to take military action against Iran’s nuclear program.

Tensions – and fears of war – spiked but then slowly faded, when Iran responded with missile attacks on two U.S. bases in Iraq, and Trump downplayed the severity of resulting injuries to American service members. But Iranian Supreme Leader Ali Hosseini Khamenei has continued to vow to get revenge for Soleimani’s killing, leaving open the possibility of an Iranian attack at any time. Under the current legal structure, a U.S. response to that could come without congressional notification or approval.

The current congressional effort is noteworthy because it seeks to make presidents answerable to Congress for a wider range of military action, and to end the broad and sweeping power of the 2001 and 2002 authorizations that have effectively let presidents do anything with the U.S. military anywhere in the world without being held accountable at home.

[Understand what’s going on in Washington. Sign up for The Conversation’s Politics Weekly.]