Earth’s magnetic field may be nearly as old as the Earth itself – and stands in stark contrast to the Moon, which completely lacks a magnetic field today.

Surrounding Earth is a powerful magnetic field created by swirling liquid iron in the planet’s core. Earth’s magnetic field may be nearly as old as the Earth itself – and stands in stark contrast to the Moon, which completely lacks a magnetic field today.

But did the Moon’s core generate a magnetic field in the past?

In the 1980s, geophysicists studying rocks brought back by Apollo astronauts concluded the Moon once had a magnetic field that was as strong as Earth’s. But a robust magnetic field requires a power source, and the Moon’s core is relatively small. For decades, scientists have struggled to resolve this conundrum: how could such a small core create a strong magnetic field?

I’m a professor of geophysics and have been studying Earth’s magnetic field for more than 30 years. I recently assembled a team to use new scientific techniques to reexamine the evidence for lunar magnetization. We found that the Moon did not in fact have a long-lived magnetic field. Not only does this finding change the modern understanding of the Moon’s geologic history, it also has major implications for the presence of resources on the Moon that could be critical to future human exploration. 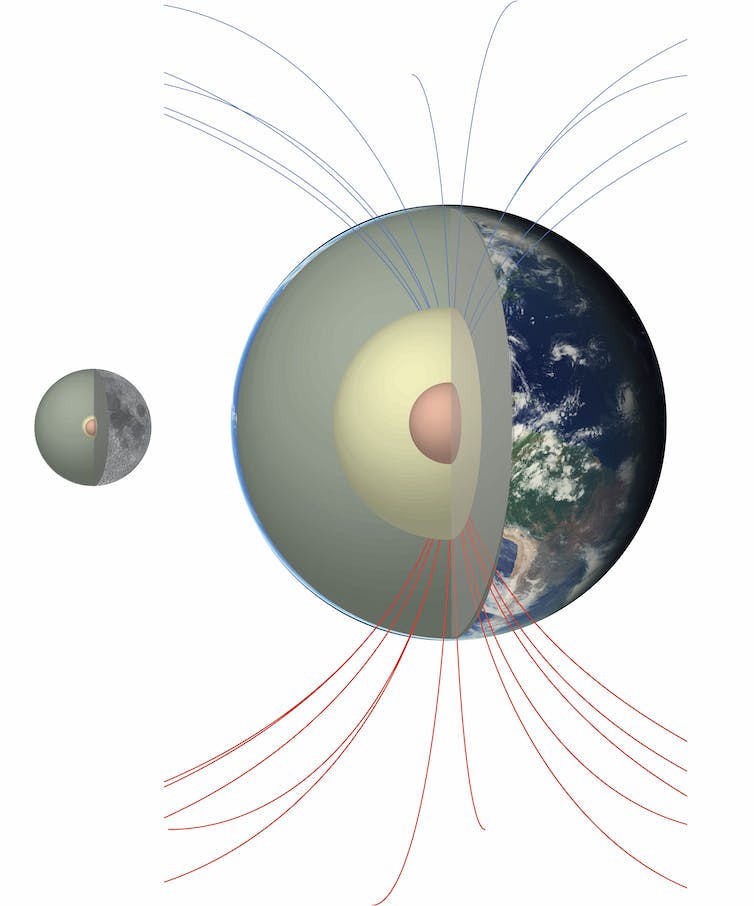 Relative to the Earth, the Moon has a small core, and it is not obvious how it could have created a strong magnetic field. Rory Cottrell/U. Rochester, CC BY-ND

Why a magnetic Moon?

Certain rocks have the extraordinary ability to preserve records of past magnetic fields when they contain minerals with iron atoms that align with a magnetic field as the rock cools and solidifies. The best magnetic minerals at preserving evidence of a field are tiny – a thousand times smaller than the width of a human hair – because it takes a lot of energy to rearrange their atoms.

Geophysicists who study ancient magnetism recreate this process, reheating rock samples in the presence of known magnetic fields and comparing the new alignment of the iron atoms with the orientation of iron atoms before the rock was reheated. This allows researchers to learn about past magnetic fields.

Early researchers studying the first rocks brought back from the Moon by U.S. astronauts wanted to use this method to study the Moon’s magnetism. But they faced problems. Lunar rocks contain a certain type of iron – called native iron – that is easily altered by heat. Additionally, the native iron grains in lunar rocks are sometimes relatively large, making them less likely to reliably record past magnetic fields.

From the 1970s onward, geophysicists used alternative, nonheating methods to study the Moon’s magnetism. They found that some lunar samples had recorded strong magnetic fields, suggesting that the Moon had a magnetic field for over 2 billion years.

But this result only deepened the conundrum. The question of how the Moon’s core could produce a strong magnetic field remained unsolved. 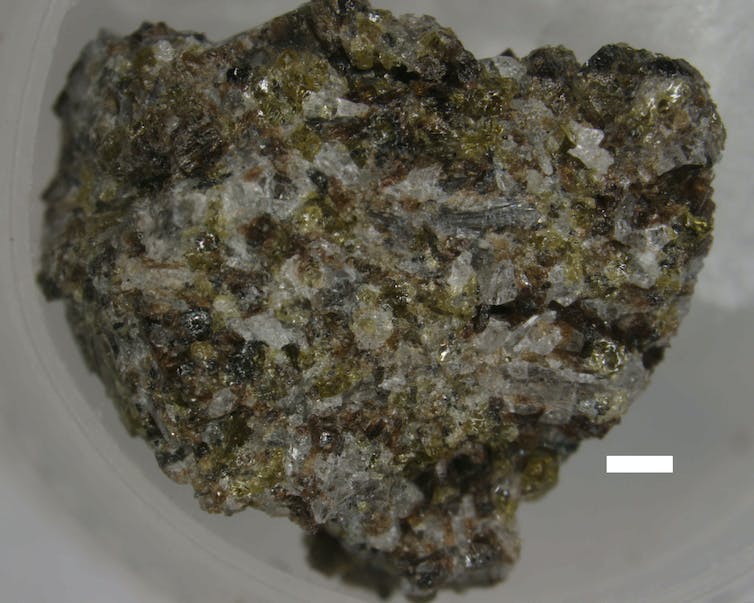 Samples from the Moon, like this lunar basalt, are a complex mix of many minerals, and only some can record signals of past magnetic fields. The white scale bar is 1 mm. Kristin Lawrence, CC BY-ND

In the experiments, some Apollo samples showed evidence of strong magnetic fields but other samples did not. Some researchers attributed the missing magnetization to the presence of large native iron grains that were poor magnetic recorders. But many of the samples also contained small iron grains that should have recorded a field.

There have been long-standing doubts about the nonheating techniques researchers used on the Apollo samples. Some scientists have called them methods of “last resort” and conclude that the uncertainties in data collected in this way were so large that any interpretation must be viewed as speculation.

Alternatively, another group of scientists has suggested for decades that when meteorites strike the Moon, they create a dusty plasma – a gas of ions and electrons – that could generate a strong magnetic field and magnetize lunar rocks near the impact zone.

In 2008, geophysicist Kristin Lawrence decided to revisit the question of lunar magnetization using an improved reheating technique. In contrast to the researchers who originally studied the samples, she was unable to detect any definitive evidence for a past magnetic field. The approach Lawrence and her team used was better than the nonheating tests, but her results were still not conclusive. She felt she was on to something, though, and that is when she turned to me and my lab for help. 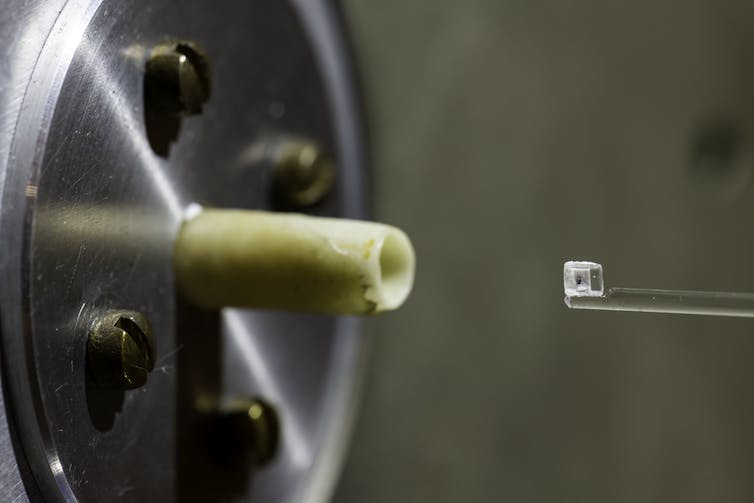 By using a new technique, researchers were able to isolate and test tiny samples – like the piece seen here mounted inside a quartz cube – for magnetic evidence. Adam Fenster/U. Rochester, CC BY-ND

In 2011, Lawrence brought us a collection of lunar samples to test. We had been developing techniques to identify individual millimeter-size silicate crystals that contain only very small iron grains and have ideal recording properties. We then used an ultrasensitive superconducting magnetometer and a special carbon dioxide laser to rapidly heat those samples in a way that avoids altering their iron minerals. We found that nearly all the rocks had profoundly weak magnetic signals.

At the time of this first test we were still improving the method, so we couldn’t say with certainty whether the samples had formed on a Moon without a magnetic field. But we have been improving our testing methods, and last year we decided to revisit the Apollo samples.

We definitively found that some of the samples did indeed contain magnetic minerals capable of preserving high-fidelity signals of ancient magnetic fields. But the rocks had recorded no such signals. This suggests that the Moon lacked a magnetic field for nearly all of its history.

So, what explains the previous findings of a magnetic Moon? The answer was in one of the samples: a small, dark piece of glass containing tiny iron-nickel particles. 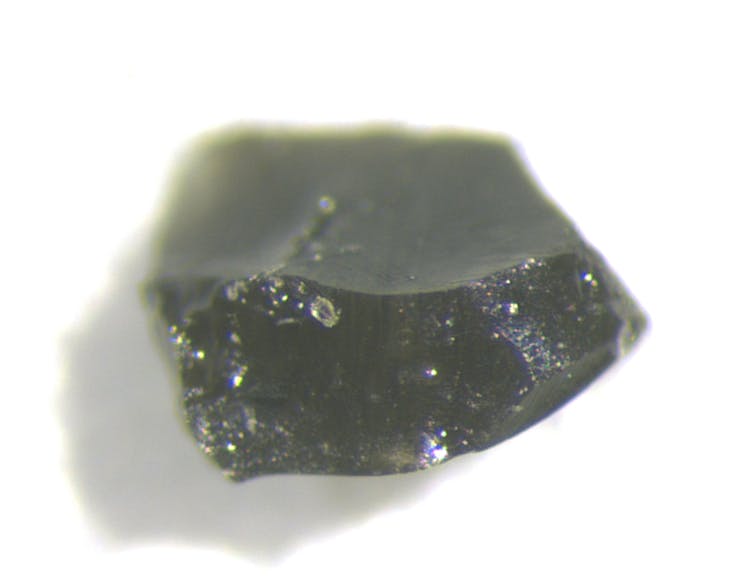 This small piece of lunar glass was formed and magnetized by a meteorite impact and could explain the strong magnetic readings from the past. Rory Cottrell/U. Rochester, CC BY-ND

The glass was made by a meteorite impact and showed clear evidence of a strong magnetic field. But it was formed only about 2 million years ago. Nearly all geophysicists agree the Moon did not have a magnetic field at that time, because after 4.5 billion years of cooling there was not enough heat left to power the churning of iron in the Moon’s core to generate a field. The magnetic signature of the glass matched simulations of magnetic fields that can be generated by meteor impacts. This showed that meteorite impacts alone can create strong magnetic fields that magnetize rocks nearby. This could explain the high values previously reported from some Apollo rocks.

Taken together, I believe these findings resolve the mystery of a seemingly magnetic Moon. 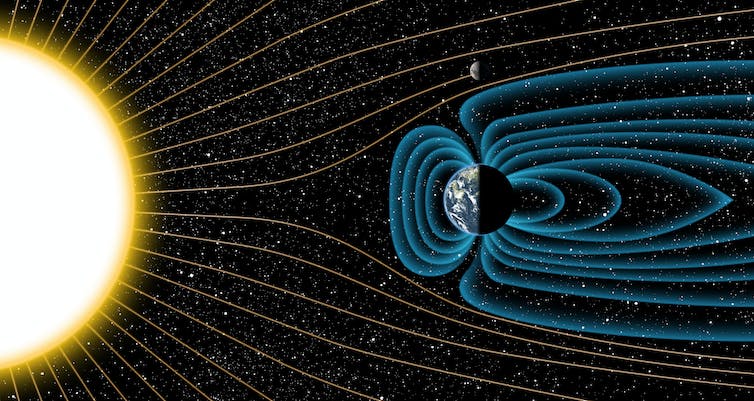 Earth’s magnetic shield blocks solar wind, whereas the lack of a magnetic field on the Moon allows the solar wind to directly hit its surface and deposit elements. Michael Osadciw/U. Rochester, CC BY-ND

This new view of lunar magnetism has huge implications for the potential presence of valuable resources as well as information about the ancient Sun and Earth that may be buried in lunar soils.

Magnetic fields act as shields that prevent solar particles from reaching a planet or moon. Without a magnetic field, solar wind can hit the surface of the Moon directly and implant elements like helium-3 and hydrogen into the soil.

Helium-3 has many applications, but importantly, it could be a fuel source for nuclear fusion and future planetary exploration. The value of hydrogen comes from the fact that it can combine with oxygen to form water, another crucial resource in space.

Since the Moon did not have a long-lived magnetic field, these elements could have been accumulating in soils for billions of years longer than previously thought.

There is also scientific value. Elements embedded by solar wind could shed light on the evolution of the Sun. And as the Moon passes through Earth’s magnetic field, elements from Earth’s atmosphere can be deposited on the lunar surface, and these may hold clues about the earliest Earth.

The absence of a long-lived magnetic field on the Moon might strike some as a loss, but I believe it may unlock a scientific bonanza and a valuable stash of potential resources.