Tree squirrels are the Olympic divers of the rodent world, leaping gracefully among branches and structures high above the ground.

Tree squirrels are the Olympic divers of the rodent world, leaping gracefully among branches and structures high above the ground. And as with human divers, a squirrel’s success in this competition requires both physical strength and mental adaptability.

The Jacobs lab studies cognition in free-ranging fox squirrels on the Berkeley campus. Two species – the eastern gray squirrel (Sciurus carolinensis) and the fox squirrel (Sciurus niger) – thrive on campus landscapes and are willing participants in our behavioral experiments. They are also masters in two- and three-dimensional spatial orientation – using sensory cues to move through space. 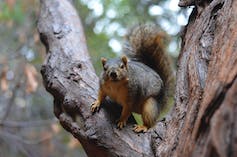 Fox squirrel in eucalyptus grove on the campus of the University of California, Berkeley. Judy Jinn, CC BY-ND

In a newly published study, we show that squirrels leap and land without falling by making trade-offs between the distance they have to cover and the springiness of their takeoff perch. This research provides new insights into the roles of decision-making, learning and behavior in challenging environments that we are sharing with researchers of human movement and with engineers. At present, there is no robot as agile as a squirrel, and none that can learn or make decisions about dynamic tasks in complex environments – but our research suggests the kinds of abilities that such robots would need.

Thinking on the go

While a squirrel’s life may look simple to human observers – climb, eat, sleep, repeat – it involves finely tuned cognitive skills. Squirrels are specialized seed dispersers: They harvest their winter’s supply of nuts and acorns during a six- to eight-week span in the fall, bury each nut separately and rely on spatial memory to retrieve them, sometimes months later.

We know that squirrels organize their caches hierarchically. When provided with five nut species in a random order, Berkeley fox squirrels buried nuts in clusters according to species. Because larger nuts contain more calories, squirrels invest more heavily in them, carrying them to safer locations and spacing their hiding places farther apart.

We also discovered that a squirrel assesses the value of a nut by flicking its head with the nut in its mouth, just as a human might bob a pencil in her hand to assess its weight. And we know that they create their cache maps based on factors that include the scarcity of food in that season, the quantity of nuts already cached and the risk of being observed caching by other squirrels. 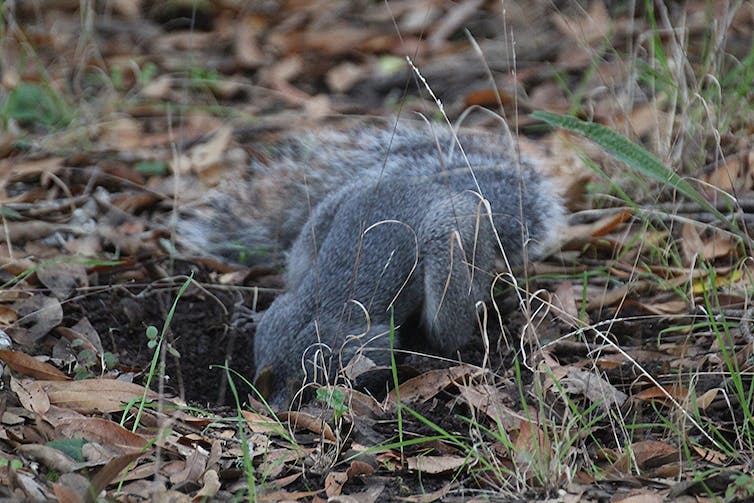 Along with observational studies, we have also assessed how squirrels perform abstract spatial tasks. For example, we have measured how well they are able to inhibit a lunge toward a remembered food location – part of an international study on the evolution of self control. In another experiment, we put squirrels through a vertical maze that mimicked the branching decisions they face when navigating in trees to see how they return to locations that they remember.

We also have found that while squirrels were solving a tabletop memory puzzle, their cognitive flexibility peaked during the intense period of storing their winter food supply. This explains why Berkeley squirrels are able to switch more easily between types of landmarks during the caching season.

Our new study brought together squirrel psychologists and comparative biomechanists to ask whether squirrels’ cognitive decision-making extends to dynamic changes in locomotion – the famous squirrel leap. How do squirrels’ perceived capabilities of their bodies and their guesses about the stability of the environment shape their decisions about movement?

Robert Full from the PolyPEDAL Laboratory is renowned for studies that extract fundamental design principles through experiments on locomotion in species with unique specializations for movement, from crabs to cockroaches to leaping lizards. Graduate students Nathaniel Hunt, who is trained in biomechanics, and Judy Jinn, trained in animal cognition, took on the challenge of assessing how a leaping squirrel could respond to sudden changes in the location and flexibility of experimental branches.

To study this question in wild squirrels, we designed a magnetic climbing wall that could be mounted on wheels and rolled out to the famous Berkeley eucalyptus grove to meet the squirrels on their own turf. We brought high-speed cameras and peanuts for persuading squirrels to patiently wait for their turn on the wall.

Our goal was to persuade squirrels to take off from a flexible springboard attached to the climbing wall and jump to a fixed perch protruding from the wall that held a shelled walnut reward. And once again, squirrels surprised us with their acrobatics and innovation.

By increasing the springiness of the springboard and the distance between it and the goal, we could simulate the challenge a squirrel faces as it races through tree branches that vary in size, shape and flexibility. Squirrels leaping across a gap must decide where to take off based on a trade-off between branch flexibility and the size of the gap.

We found that squirrels ran farther along a stiff branch, so they had a shorter, easier jump. In contrast, they took off with just a few steps from flexible branches, risking a longer leap.

Using three branches differing in flexibility, we guessed the position of their takeoff by assuming equal risk for leaping from an unstable branch and jump distance. We were wrong: Our model showed that squirrels cared six times more about a stable takeoff position than how far they had to jump.

Next we had squirrels leap from a very stiff platform. Unbeknownst to the squirrels, we then substituted an identical-looking platform that was three times more flexible. From our high-speed video, we calculated how far away the center of the squirrel’s body was from the landing perch. This allowed us to to determine the landing error – how far the center of the squirrel’s body landed from the goal perch. Squirrels quickly learned to jump from the very bendy branch that they expected to be stiff and could stick the landing in just five tries.

A fox squirrel learning to leap from a flexible platform. Video by Nathaniel Hunt, UC Berkeley.

When we raised the ante still further by raising the height and increasing the distance to the goal perch, the squirrels surprised us. They instantly adopted a novel solution: parkour, literally bouncing off the climbing wall to adjust their speed and accomplish a graceful landing. Once more, we discovered the remarkable agility that allows squirrels to evade predators in one of nature’s most challenging environments, the tree canopy.

A fox squirrel parkours off a vertical surface to increase stability for landing. Video by Nathanial Hunt, UC Berkeley.

Millions of people have watched squirrels solve and raid “squirrel-proof” bird feeders, either live in their backyard or in documentaries and viral videos. Like Olympic divers, squirrels must be flexible both physically and cognitively to succeed, making rapid error corrections on the fly and innovating new moves.

With the funding this project attracted, we have joined a team of roboticists, neuroscientists, material scientists and mathematicians to extract design principles from squirrel leaps and landings. Our team is even looking for insights into brain function by studying leap planning in lab rats.

Our analysis of squirrels’ remarkable feats can help us understand how to help humans who have walking or grasping impairments. Moreover, with our interdisciplinary team of biologists and engineers, we are attempting to create new materials for the most intelligent, agile robot ever built – one that can assist in search-and-rescue efforts and rapidly detect catastrophic environmental hazards, such as toxic chemical releases.

A future vision for our efforts? First-responder robotic squirrels, equipped with the physical and cognitive toughness and flexibility of a squirrel at a bird feeder.

Judy Jinn, who participated in this study as a graduate student, is a quantitative UX Researcher at Facebook.