Jawaharlal Nehru was not just the architect of modern India and the country’s first prime minister. He also played a central role in the discrediting of European imperialism and gave a voice to people across Asia and Africa struggling for self-determination and racial equality.

This piece is part of a new series in collaboration with the ABC’s Saturday Extra program. Each week, the show will have a “who am I” quiz for listeners about influential figures who helped shape the 20th century, and we will publish profiles for each one. You can read the other pieces in the series here.

Jawaharlal Nehru was not just the architect of modern India and the country’s first prime minister. He also played a central role in the discrediting of European imperialism and gave a voice to people across Asia and Africa struggling for self-determination and racial equality.

An unlikely revolutionary, Nehru was born in 1889 into wealth and privilege. His father was a Kashmiri, a high caste Brahmin and a successful barrister, able to fund the best education for the young Jawaharlal the British system could offer.

After attending Harrow School and Cambridge University, Nehru, too, became a lawyer and could easily have settled into a comfortable life.

Instead, Nehru was swept by the enigmatic Mahatma Gandhi into the campaign against British rule in India. For the next 25 years, he dressed in homespun cotton, endured long terms in prison and campaigned relentlessly for the cause. 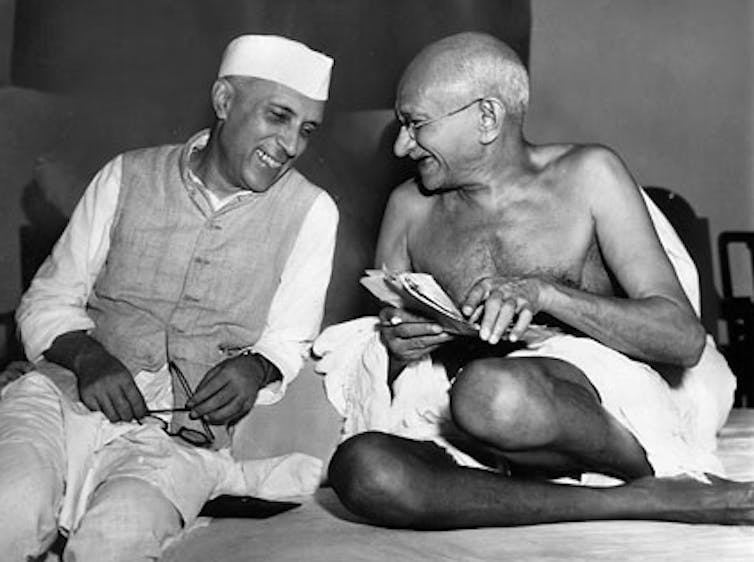 Jawaharlal Nehru (left) sharing a joke with Mahatma Gandhi during a meeting of the All India Congress in 1946. Wikimedia Commonsoriginal article.

Once the British were overthrown and he rose to power, Nehru quickly set about ensuring his vast, impoverished and hugely diverse country was governed by democratically elected leaders and the rule of law.

In parallel, he tried to make India economically self-reliant, so that it could no longer be exploited or manipulated by foreign powers.

Perhaps inevitably, given the scale of the challenges involved, the results of these efforts were mixed.

Nehru’s hopes for a peaceful transition from British rule were dashed by the horrific violence that accompanied partition — the division of the British colony into the separate states of India and Pakistan. Hundreds of thousands died in clashes between Hindus and Muslims, and millions more were displaced and traumatised. 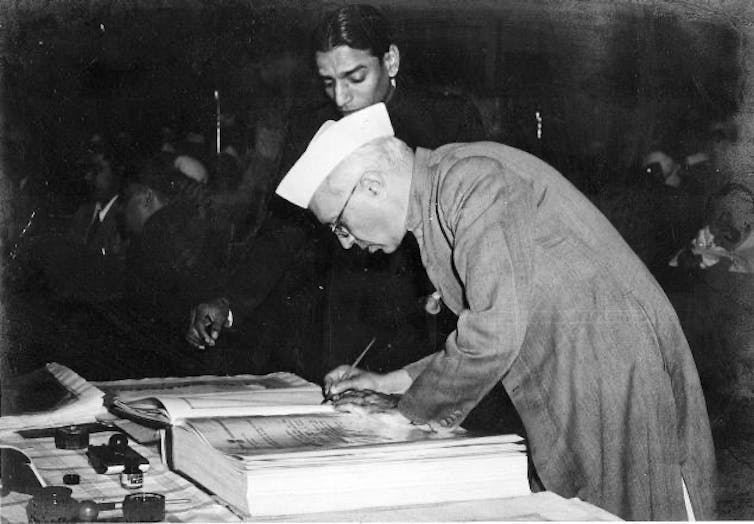 Nehru did succeed in the herculean effort of transforming India into a constitutional democracy, but his ambitious plans to modernise the economy proved harder to realise.

To be sure, India avoided mass famines like those that ravaged Bengal in mid-1940s and China during the so-called “Great Leap Forward” in the late 1950s and early 1960s. But most Indians did not see major improvements in their standard of living.

A vision for a post-colonial world

Where Nehru really shone was on the world stage. Urbane, well-read, charismatic and eloquent, he was convinced India had a special role to play in international politics, despite its poverty and relative weakness.

And to ensure that happened, Nehru served as his own foreign minister and ambassador-at-large.

Initially, Nehru’s principal concern was the struggle against European imperialism, especially in Asia. Britain, France and the Netherlands all reasserted control over their colonial possessions in the region after the second world war. In response, Nehru and Gandhi rallied anti-colonial leaders, holding the Asian Relations Conference in New Delhi in 1947 to chart the way forward for the continent.

They need not be suspicious of each other’s intentions, nor greedy for each other’s territory, he argued. And they should not waste their scarce resources on building armies or atom bombs. Committed to social and economic development and to treating others with mutual respect, they could — and should — create a more just and peaceful world.

Nehru was highly adept in using new platforms like the United Nations and the global media to promote this vision. He delivered passionate speeches and charmed foreign journalists in long interviews.

He campaigned against nuclear weapons, calling in 1954 for the superpowers to halt their tests of increasingly destructive bombs. This paved the way for a partial ban on testing in 1963.

He called for an end to racial discrimination, most notably in South Africa. He also commissioned India’s diplomats to offer their services to mediate in a series of disputes, including the Korean war and France’s disastrous attempt to cling to its colonial possessions in Indochina.

The birth of non-alignment

Throughout, Nehru made the case for what became known as “non-alignment” — perhaps his greatest contribution to the 20th century world.

India and other post-colonial states, he argued, had no good reason to take sides in the Cold War and plenty of reasons to maintain cordial relations with both the US and Soviet Union. 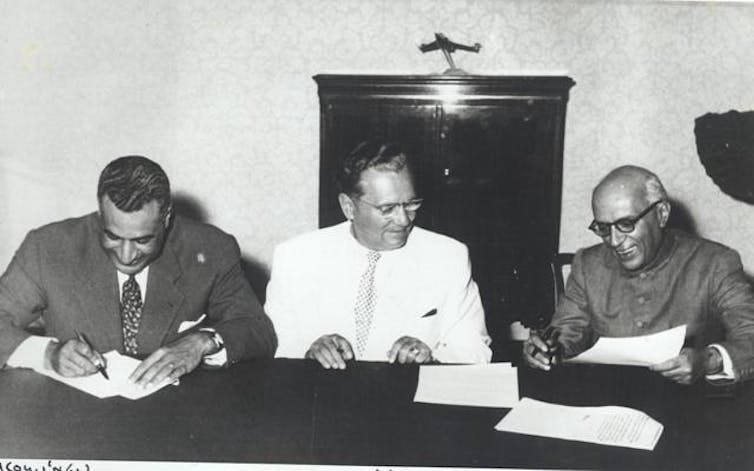 Allying with one or the other was too costly and compromising. It brought obligations to build armies and fight distant wars. And it meant renouncing the ability to criticise your ally when it did things with which you disagreed.

Non-alignment annoyed Cold Warriors in both Moscow and Washington. But it proved popular elsewhere, especially among newly independent states.

It helped inspire a series of major meetings intended to promote African and Asian cooperation in the shadow of US-Soviet competition, including the Bandung Conference in 1955, as well as the creation of the Non-Aligned Movement in the 1970s.

Today, 120 states belong to the movement, though India’s interest in the bloc has waned as it has grown stronger and wealthier.

Nehru helped delegitimise imperialism and usher in a new world no longer dominated by the Europe powers. He laid out principles that he hoped would encourage mutual respect in international relations – principles eagerly embraced, if not always followed, by other post-colonial leaders.

It is ironic, then, that arguably Nehru’s greatest failure – the one that irreparably tarnished his leadership and broke his health – concerned foreign policy.

Convinced China would abide by the “Five Principles of Peaceful Coexistence” agreement it struck with India in the mid-1950s, Nehru failed to anticipate a military conflict over the long-disputed frontier. When Mao Zedong ordered a surprise attack in 1962, India’s forces were humiliated. And to Nehru’s dismay, neither the UN, nor the superpowers, intervened.

To critics, the Sino-Indian war exposed Nehru’s naivety and the limits of non-alignment. It compelled India to retrench and rearm, and laid bare his dream of an Asia free from “power politics”. 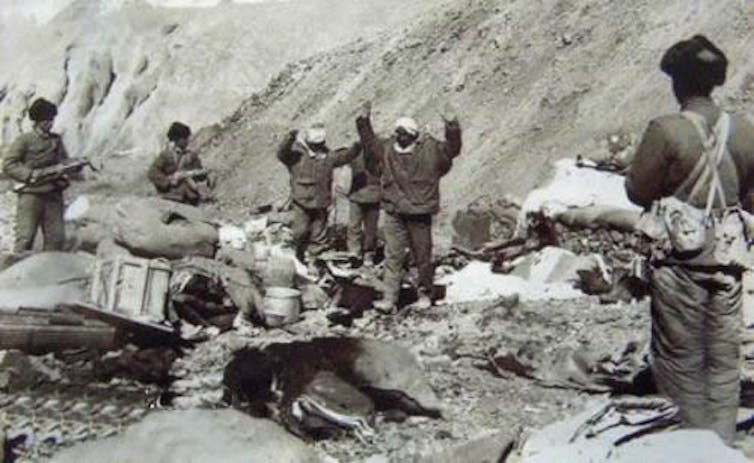 India has travelled far since Nehru’s time and left much of his legacy by the wayside. It now possesses the world’s second largest military - after China - and a nuclear arsenal. It has forged a strong security partnership with the United States.

But New Delhi still remains wary of alliances or anything that might compromise independence of voice or action. And it is as convinced today as when Nehru was in power that India is destined to play a special role in the world.

This article is republished from The Conversation under a Creative Commons license. Read the