Would it really be possible to get the DNA of dinosaurs and then recreate them? – Lucie R., age 5, Atlanta, Georgia

As a paleontologist – that’s a scientist who studies ancient life – I’m asked this question all the time. After all, the scientists in “Jurassic Park” (and later, “Jurassic World”) used DNA to recreate dozens of dinosaurs: Triceratops, Velociraptor and T. rex.

And if you saw any of those movies, you had to wonder: Could real scientists do that today? 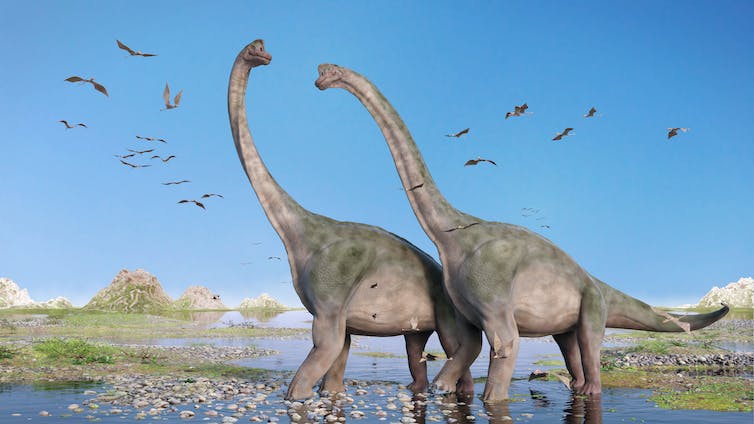 Brachiosaurus, a herbivore from the Jurassic Period. In the background: a flock of Pterosaurs. dottedhippo/iStock via Getty Images Plus

The ABCs of DNA

DNA – which stands for deoxyribonucleic acid – is something in every cell of every organism that ever lived on Earth – including dinosaurs.

Think of DNA as molecules that carry the genetic code, a set of instructions that helps bodies and minds grow and thrive.

Your DNA is different from everyone else’s. It determines many of the characteristics that define you, like the color of your eyes or whether your hair is straight or curly.

DNA is much easier to find in the “soft parts” of an animal – their organs, blood vessels, nerves, muscle and fat.

But a dinosaur’s soft parts are long gone. They either decomposed or were eaten by another dinosaur. 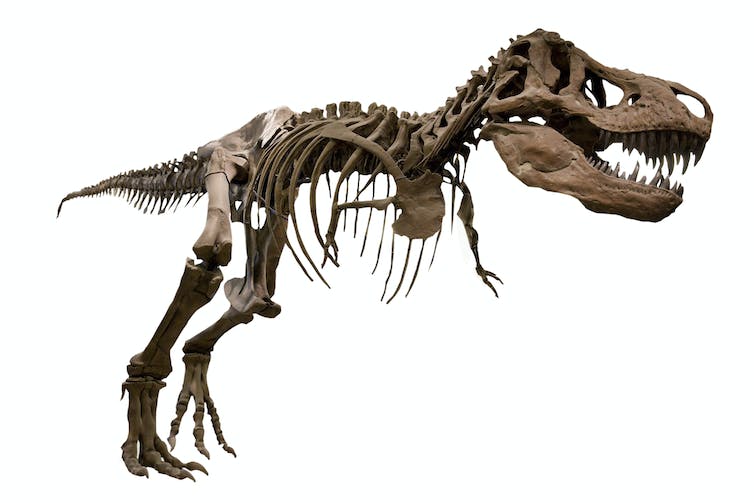 Made from fossils: The skeleton of a T. rex. JaysonPhotography/iStock via Getty Images Plus

Is DNA in the fossils?

Dinosaur fossils are all that’s left of those prehistoric animals.

Immersed for tens of millions of years in ancient mud, minerals and water, the fossils come from the dinosaur’s so-called “hard parts” – its bones, teeth and skull.

We find dinosaur fossils in the ground, in riverbeds and lakes, and on the sides of cliffs and mountains. Every now and then, someone finds one in their backyard.

Often, they’re quite near the surface, and usually, they’re embedded in sedimentary rock.

With enough fossils, scientists can build a dinosaur skeleton – what you see when you go to the museum. 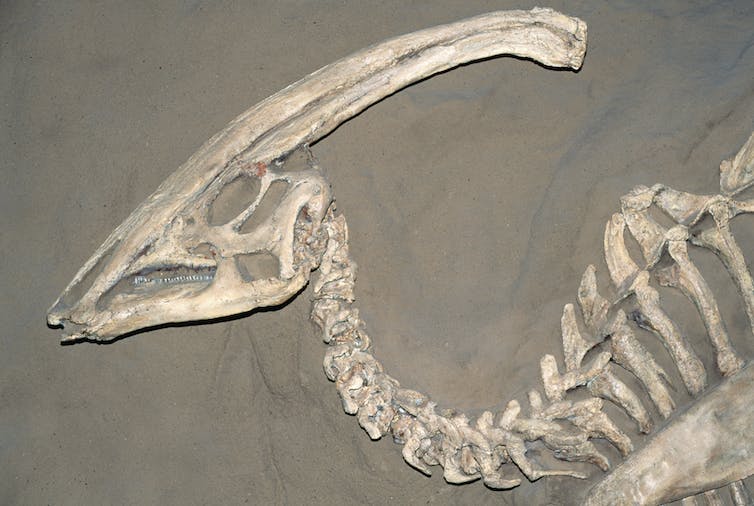 A fossil of Parasaurolophus, a dinosaur that lived during the Cretaceous period in what is now North America. Kevin Schafer/The Image Bank via Getty Images

But scientists have a big problem when trying to find DNA in dinosaur fossils.

That sounds like a long time, but the last dinosaur died at the end of the Cretaceous Period. That’s more than 65 million years ago.

Dig up a fossil today, and any dino-DNA within would have long since fallen apart.

That means, as far as scientists know, and even using the best technology available today, it’s not possible to make a dinosaur from its DNA.

Although it’s too late to find dino-DNA, scientists recently found something almost as intriguing.

They discovered DNA fragments in the fossils of Neanderthals and other ancient mammals, such as woolly mammoths.

Now that makes sense; those fragments are less than 2 million years old, well before all of the DNA would decay. 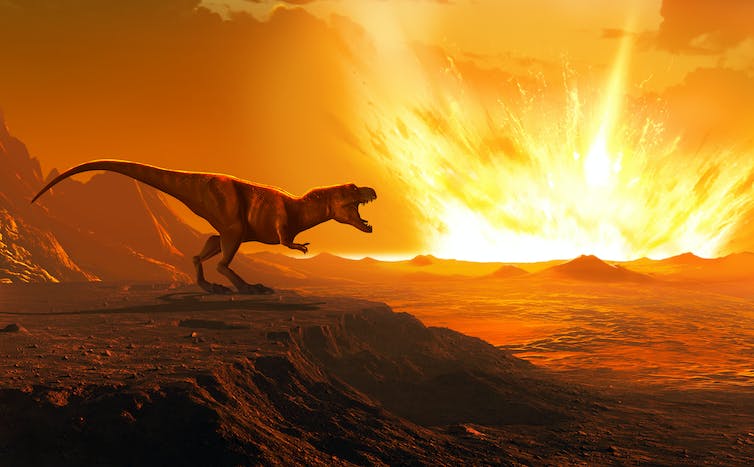 Artist’s illustration of a T. Rex watching as an asteroid strikes the Earth, 65 million years ago. The asteroid crash caused an extinction event that killed the dinosaurs. Mark Garlick/Science Photo Library via Getty Images

Imagine for a moment …

Just for fun, let’s imagine that somehow, sometime in the future, researchers came up with fragments of dinosaur DNA.

With only fragments, scientists still could not make a complete dinosaur.

Instead, they would have to combine the fragments with the DNA of a modern-day animal to create a living organism.

That creature, however, could not be called an actual dinosaur. Rather, it would be a hybrid, a blend of dinosaurs and, most likely, a bird or reptile.

Think that’s a good idea? After all, the scientists in the “Jurassic” movies tried that. And you know what happened there.