India emerged in June and July of 2021 from a particularly savage second wave of COVID-19, with total confirmed cases at about 32 million and more than 400,000 deaths.

Cases of COVID-19 are surging around the world, but the course of the pandemic varies widely country to country. To provide you with a global view as we approach a year and a half since the official declaration of the pandemic, The Conversation’s editors from around the world commissioned articles looking at specific countries and where they are now in combating the pandemic.

Here, Rajib Dasgupta from the Centre of Social Medicine and Community Health at Jawaharlal Nehru University in New Delhi writes about India following its devastating wave of infections earlier in 2021. You can see the whole collection of articles here

What explains the rapid spike and then sharp decline of cases of the April-to-June wave?

India emerged in June and July of 2021 from a particularly savage second wave of COVID-19, with total confirmed cases at about 32 million and more than 400,000 deaths. But this could be a dramatic under-counting. Alternative estimates have put excess deaths in the range of 3.4 million to 4.9 million.

This wave was driven by multiple coronavirus variants, including alpha, which was first detected in the U.K., and delta, first identified in India and now the main source of infections in many countries. Because the emerging threat was not recognized early enough, health care services were overwhelmed starting in early April, with the lack of reliable oxygen supply becoming a major problem.

Both the alpha and delta variants are highly contagious, with delta being nearly twice as transmissible as the original strain of SARS-CoV-2. The rapid rise in cases in India is attributed to the high viral load – the amount of virus infecting a person – of delta, which is about 1,000 times higher than other strains. This resulted in widespread infections among household members with rates as as high as 80% to 100%.

The decline of cases in India has been surprisingly rapid given that there were daily new cases in the range of 400,000 in the first week of May and the test positivity rate in some districts was as high as 20%. Similar sharp declines were observed more recently in the U.K., Netherlands and Israel – perhaps a result of a combination of high vaccination rates and high infection levels. Daily cases in India are now between 30,000 and 40,000 per day. 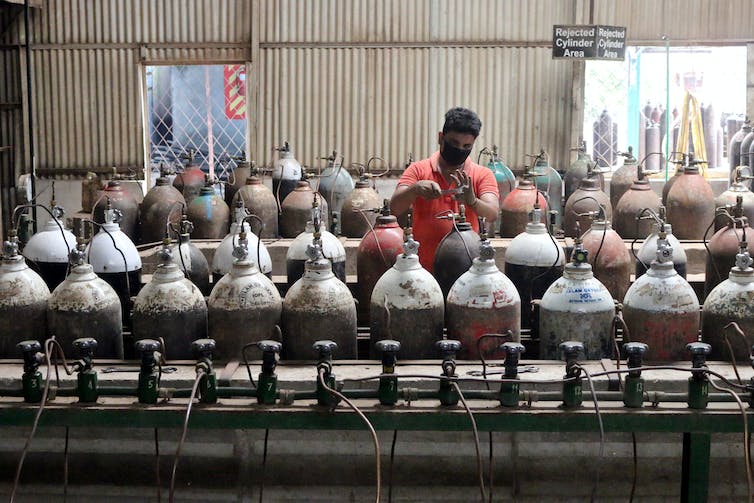 India stopped exporting oxygen to other countries after a severe shortage occurred during the first wave of COVID-19 cases fueled by the delta variant, which first appeared in India. Habibur Rahman/Eyepix Group/Barcroft Media via Getty Images

What’s the progress with vaccination?

With the vaccination campaign substantially picking up in India, about 15% of adults have now received both doses of the vaccine and nearly 40% a single dose. A record 8.8 million doses were administered on Aug. 17, 2021 in a bid to achieve the 250 million target for August, although some projections consider it likely will be missed.

Supply situations continue to be challenging. Production of the Covaxin vaccine, developed by Indian company Bharat Biotech, did not accelerate as envisaged, at least in part due to quality issues of some batches. Negotiations with Moderna haven’t worked out and Johnson & Johnson received emergency authorization for use in August. Production of the Russia-developed Sputnik V by an Indian partner has been delayed and manufacturing is expected to be on track only by September. Covishield from AstraZeneca continues to be the workhorse, accounting for 87.5% of the vaccines administered to date.

An estimated 9 million doses will need to be administered daily through the next five months to meet the target of vaccinating all adults by Dec. 31, 2021. For comparison, average daily vaccinations in the U.S. at its peak in April was 3.5 million per day. An added challenge for the Indian campaign will be the vaccination of children. Vaccination of an estimated 400 million in the 2-18 years age group is likely to begin in March 2022 though emergency authorization is expected to begin this month.

How many of India’s 1.3 billion people have been infected?

In the aftermath of the second wave from roughly April to June, the Indian Council of Medical Research conducted the fourth round of a national sero-survey in June and July 2021 to test for antibodies in blood samples from residents across 70 districts of 21 states. The overall sero-prevalence was 67.6%, a huge increase from 24.1% recorded in the third round from December, 2020 to January, 2021. The presence of antibodies indicates that a person has either been exposed to the coronavirus or has been vaccinated.

Sero-positivity among children was 57.2% in those aged 6-9 years and 61.6% among those who are 10-17 years old. Experts believe that there is not much scientific evidence that children would be disproportionately vulnerable in a third wave. The government, however, anticipates the possibility of intermittent surges in the number of cases and prepared operational guidelines for children and adolescents in preparation for a third wave. Seroprevalence among those above 45 years was 77.6% and 66.7% among younger adults, indicating the effect of vaccination as well as infections.

The coronavirus had spread through the entire country; seroprevalence among the rural population (66.5%) was only slightly lower than in urban counterparts. A wide range of interstate differences have emerged, from a low of 44.4% in Kerala to 79% in Madhya Pradesh.

The extent of undercount – the difference between estimated cases (based on seroprevalence) and actual cases detected by RT-PCR and rapid antigen tests – is particularly worrying. Nationally, the system missed 33 cases for every one detected.

What are the prospects for the weeks and months ahead?

With about 40,000 cases and 400 deaths each day as of mid August, a new uptick is likely in the cards. The Indian states experiencing most of these new cases are those with relatively lower sero-prevalence, ranging between 50% and 70%. The 400 million sero-negative pool – that is people who have not been infected or had the vaccine – continues to be a large vulnerable group.

Forecasting by modelers indicates a third wave beginning in August and peaking at 100,000 to 150,000 infections a day by October. An alternative projection expects the peak in cases going until November. States currently reporting higher daily cases are also testing at two-three times the national average. The case fatality rate in these states is also lower than the national average and health service capacities are not yet stretched. For its part, the federal government announced the second phase of its emergency response policy with targets that go until March 2022.

Has the economy opened back up?

COVID-19 vaccination in India has been marked by both inequity and hesitancy; negotiating both will be crucial in the weeks ahead.

The range of vulnerabilities have included rural and remote locations and a lack of access to the internet; a gender divide has emerged too with more men being vaccinated than women. As vaccination progresses with underlying inequities, the phenomenon of “patchwork vaccination” emerges – pockets that are highly vaccinated and adjacent to places or communities with low coverage. The communities with low coverage are vulnerable to hyperlocal outbreaks.

Most economic activities have resumed, and the education and entertainment sectors are opening up too. A joint statement on June 6, 2021, issued by the public health associations in India urged that district-level sero-surveys be undertaken by the state or federal health services to enable a more granular understanding of the epidemiologic context to enable planning. While this was accepted in principle, such systematic surveys have yet to be rolled out.

The World Health Organization advises that public health and social measures in the context of COVID-19 be guided by local transmission dynamics. Planning at the district level in India shall be crucial in the journey ahead.

[Get The Conversation’s most important coronavirus headlines, weekly in a science newsletter]