Afghanistan possesses a wealth of nonfuel minerals whose value has been estimated at more than US$1 trillion.

The official ending of the U.S.-led war in Afghanistan leaves a number of long-term questions, including how the country can build a functioning economy. Now that U.S. assistance has evaporated and international aid is largely shut off, what options does Afghanistan have?

One possibility resides in natural resources. Afghanistan possesses a wealth of nonfuel minerals whose value has been estimated at more than US$1 trillion. For millennia the country was renowned for its gemstones – rubies, emeralds, tourmalines and lapis lazuli. These minerals continue to be locally extracted, both legally and illegally, in mostly small, artisanal mines. Far more value, however, lies with the country’s endowments of iron, copper, lithium, rare earth elements, cobalt, bauxite, mercury, uranium and chromium.

While the total abundance of minerals is certainly vast, scientific understanding of these resources is still at an exploratory stage. Even with a better understanding of how rewarding their extraction might be, the presence of these resources will not provide a jump-start to a new economy. As a geologist who has studied the extent of their resources, I estimate a minimum of seven to 10 years will be needed for large-scale mining to become a major new source of revenue.

British and German geologists conducted the earliest modern surveys of Afghanistan’s minerals in the 19th and early 20th centuries. But it was the Soviets in the 1960s and 1970s who performed the most systematic exploratory work throughout the country, producing a large body of detailed information that stood as the backbone to more recent studies.

From 2004 to 2011, the U.S. Geological Survey conducted a detailed review of available data, adding new information from its own aerial survey, limited field checking and from the Afghanistan Geological Survey. This work better identified mineral sites, richness and abundance.

No one who examines this work, as I have, can ignore the large-scale exploratory effort by Soviet scientists. Detailed field mapping and massive sampling, including tens of thousands of meters of borehole drilling, and lab analyses were performed. Given the time and money invested, it would appear high-level plans were in play to develop Afghanistan’s minerals once the country was under Soviet influence.

Based largely on this information, the USGS delineated 24 areas in the country and estimated their mineral abundance. Data packages were prepared on all 24 areas for companies to use as a basis for making bids to exploit any resources.

Chinese and Indian companies expressed strong interest, and actual concessions were granted. Arguments over contract terms and concerns about security, however, have stalled activity since the late 2010s.

How much mineral abundance does Afghanistan actually have? I’ll try to answer this with a brief summary of USGS estimates for metals of special interest: copper, iron, lithium and rare earth metals. Geoscientists who were part of the USGS effort have noted that their figures are “conservative” but also “preliminary.”

Regardless, it’s safe to say the resources in total are huge. Total copper resources for all known deposits sum to about 57.7 million metric tons. At current prices, the resource value is $516 billion. These are “undiscovered” resources – identified but not fully explored and assessed. If further study were to judge them recoverable at a profit, they would rank Afghanistan among the top five nations for copper reserves in the world. 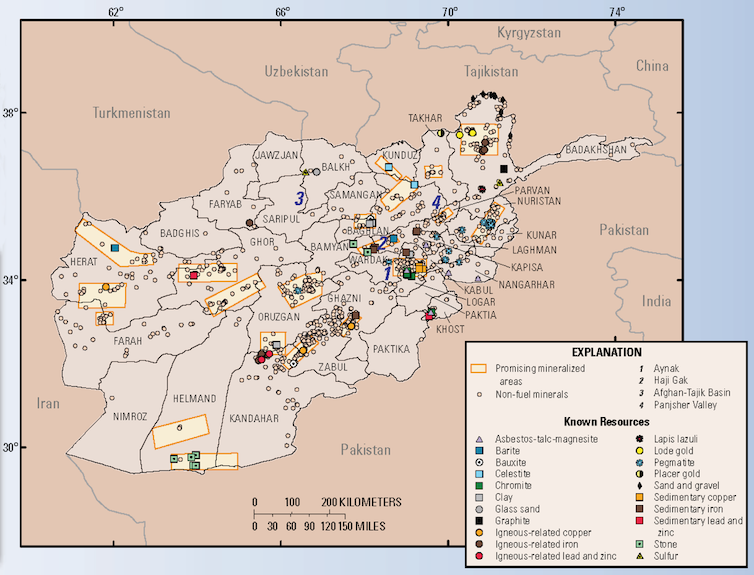 The largest copper deposit, which also contains significant amounts of cobalt, is the Aynak ore body, located about 18 miles (30 kilometers) southeast of Kabul. After the Soviet Union invaded Afghanistan in 1979, the Soviets began development of the mine but it was suspended in 1989 following Soviet withdrawal from the country. The high-grade portion of the total Aynak deposit is estimated at 11.3 million metric tons of copper, worth $102 billion at current market prices.

Afghanistan also has world-class iron ore resources, concentrated in the Haji Gak deposit of Bamiyan Province. Haji Gak has an estimated 2,100 million metric tons of high-grade ore that is 61%-69% iron by weight. At current price levels, this represents a value of $336.8 billion, placing Afghanistan among the top 10 nations worldwide in extractable iron.

Lithium resources in Nuristan Province, which occur as veins, impressed Soviet geoscientists with the amount of hard rock ore (lithium is also mined from brine). Based on USGS estimates, it is a significant but modest resource in today’s terms, as exploration for such deposits has increased around the world in the past decade.

Finally, rare earth elements exist in southern Helmand Province. These deposits mainly contain cerium, with smaller amounts of more valuable lanthanum, praseodymium and neodymium, totaling perhaps 1.4 million metric tons. Two of these, praseodymium and neodymium, are at high price levels – more than $45,000 per metric ton – and make exceptional magnets used in motors for hybrid and electric cars, but the abundance of these elements is not large relative to how much other countries have.

Mining wisdom holds that what’s in the ground is less important than what’s above ground. Market realities, security, contract terms, infrastructure and environmental concerns matter more than sheer abundance to whether resources can be developed.

Among these factors, perhaps the most relevant at present is strong global demand for the metals, particularly copper, lithium and rare earth elements, which are essential to the growing markets in renewable energy and electric vehicles. 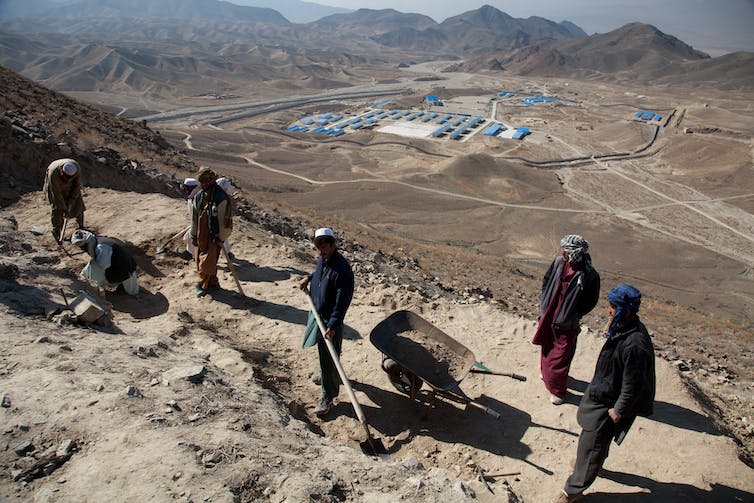 A Chinese company built this mining camp at Mes Aynak in Afghanistan about 10 years ago to house workers for a planned copper mine that never began production. The people in the front were taking part in an archaeological dig. Jerome Starkey/flicrk, CC BY-SA

Whether or not Afghanistan can begin mining these elements will depend on what the new Taliban government does. Under the former Ministry of Mines, a $2.9 billion contract for a portion of the Aynak copper deposit was granted to two state-owned Chinese companies. The 30-year contract signed in 2007 had a high royalty rate by global standards and required that ore smelting and processing be done locally. Other conditions included building a 400-megawatt coal power plant and a railway to the Pakistan border. Also stipulated was that 85%-100% of employees, from skilled labor to managerial personnel, be Afghan nationals within eight years of the date work begins. Though originally agreed to, these terms were later declared onerous by the companies, halting development.

Though roads exist to many ore deposit areas, Afghanistan lacks good-quality roadways, railways and electricity. Mining companies are no stranger to such challenges, yet the situation is heightened in this case by rugged terrain and the landlocked nature of the country. Railways, in particular, would be essential for transporting ore, raw or refined, to foreign markets.

There are also environmental and cultural concerns. Mining can result in major impacts to land and air quality, as well as watersheds – a particular concern in water-poor Afghanistan – if not regulated to best practices. No less, enforcement of such standards is required and has been a problem in many lower-income countries.

Close to the Aynak copper deposit is a large site of Buddhist relics, statues, temples and stupas. There are also Bronze Age mining sites that constitute important archaeological resources. Here, too, no clarity yet exists about how Taliban leaders, who ordered the destruction of the great Buddhist statues at Bamiyan in 2001, might view these sites.

For Afghanistan, its resources could mean a source of long-term foreign investment, skill-building and infrastructure expansion, all essential for a sustainable economy. But a major question is which companies would be involved. Afghanistan is also at the center of geopolitical struggles, involving both India and Pakistan, as well as China, Iran and the U.S. That the Taliban are now in control does not make the country’s minerals any less invested with large significance.

Author’s note: In 2015, I was the instructor for a task force class in the Henry M. Jackson School of International Studies at the University of Washington that produced a report on Afghanistan’s natural resources and the possibility of their acting as a basis for economic development. This article is devoted to the excellent work done by students on that task force.

This article was updated to correct details about development of mining operations by the Soviets.