After over a year of protests, India’s farmers have finally been heard.

In the Prime Minister’s address to the nation on the morning of Friday 19th November, Narendra Modi announced that the government would revoke the three new farm laws that have been the cause of so much agitation over the past year. The laws are due to be officially revoked in Parliament by the end of this month.

Modi said that the laws had been introduced with “pure intentions”, and regretted that he had not been able to convey the potential advantages to the farmers.

“Our government has been working for the interest of farmers, and will continue to do so in future,” said the Prime Minister.

He did not mention the way the laws had been rushed through, without consultation with the opposition or with any farmers’ groups, despite the fact that over half of India’s population works in agriculture. He did not mention that the BJP government’s economic policies have so far failed to provide alternative employment, or assistance to farmers who are already struggling and burdened with debt.

But the farmers know they have won an unprecedented victory, and shown that it is still possible for the voice of the people in India to be heard. On the streets, where some have been camped out for months on end, there were celebrations and chants of ““Kisan Ekta Zindabad” (“Long live farmers’ unity”).

The protesters have resolved to wait until the laws are officially revoked by Parliament – and then they can finally return home.

At the same time, opposition parties have celebrated Modi’s climb-down. Congress leader Rahul Gandhi declared it “a win against injustice”, and Mamata Banerjee posted on Twitter: “My heartfelt congratulations to every single farmer who fought relentlessly and were not fazed by the cruelty with which @BJP4India treated you.”

Modi’s placatory words on Friday cannot erase the events of the past year in the minds of the farmers. The government has finally done the right thing — but there has been a great deal of damage along the way.

It started with serious government mismanagement: the farm laws were announced suddenly, and rushed through Parliament. There was no time for debate or discussion. As a result, those in power had no idea of how strongly the farmers felt about the issue, and were unprepared for the level of opposition they faced.

Farmers from around the country came out in protest, but the majority were from Punjab and Uttar Pradesh – both states that will hold key elections early next year. Modi’s decision to revoke the laws seems well-timed to boost votes for the BJP in these two states, but it is unlikely that the anti-government feelings in farming communities will simply disappear.

The Sikh community in particular, who formed the backbone of the protests, has become increasingly alienated from the government – not least because of the way the government itself has treated them over the past year. It went beyond mere name-calling: Modi’s supporters accused the farmers of being part of a Sikh separatist movement, and inundated social media with brutal attacks on “Khalistanis”.

It's a tactic more suited to the playground than Parliament, but it can have serious repercussions. Defenders of human rights are labelled “Marxist terrorists” and locked up; Muslims are called “Jihadis” and told to get out and move to Pakistan. When someone challenges the government, they should be heard. Democracy encourages debate. Yet this kind of name-calling shuts down conversation and divides society.

Modi timed his announcement for Guru Purab, the day the Sikh community celebrates the anniversary of the birth of Guru Nanak. The timing was an offering of reconciliation to a group that now feels even more alienated from the BJP government, but their trust cannot be won back so easily; the protestors are still refusing to go home until Modi’s decision becomes official.

"We have no faith in a verbal promise. Unless we see it in writing that the laws have actually been repealed, we will stay here," said Raj Singh Chaudhary, a 99-year-old protester. 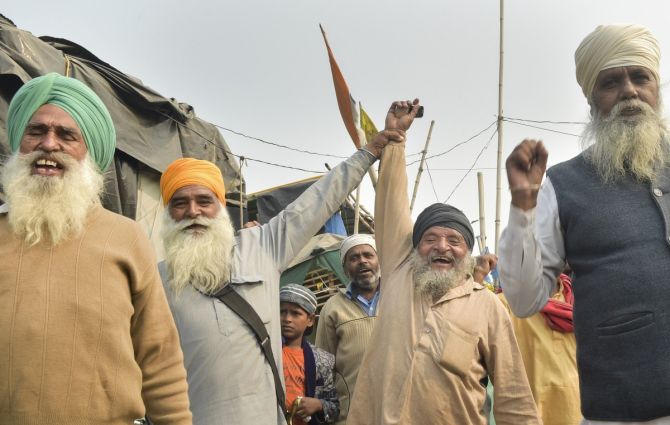 This victory did not come without a cost. A number of farmers were killed during the rare outbreaks of violence during the demonstrations. In addition, hundreds more died as a result of the harsh conditions of the long protest, as a result of exposure, Covid-19, and suicide. At least 750 people, and probably more, are known to have lost their lives.

In the wake of the PM’s announcement last Friday, politicians have stepped in to voice their support for the farmers. Telangana’s Chief Minister K Chandrashekar Rao, for example, has pledged ₹3 lakh to the families of all those who died during the struggle.

Yet despite the losses, there is real cause to celebrate. There is no question of the significance of this moment. The victory of the farmers is a sign of hope for India: it proves that when enough people stand up to an increasingly authoritarian government, they have the power to make the Prime Minister listen.

It’s rare to see Narendra Modi back down. Despite the international outcry when the Indian government annexed Kashmir in 2019 and imposed the longest communications blackout in recent history, he refused to change course. Mass protests in India against the Citizenship Amendment Act were harshly repressed. Widespread condemnation of government control of the media and arrests of journalists have changed nothing.

Yet here, finally, is proof that change is possible.