What began as competition has turned into fruitful cooperation not just between Russia and the United States but Canada, Japan, Italy, the European Space Agency and over 100 other countries 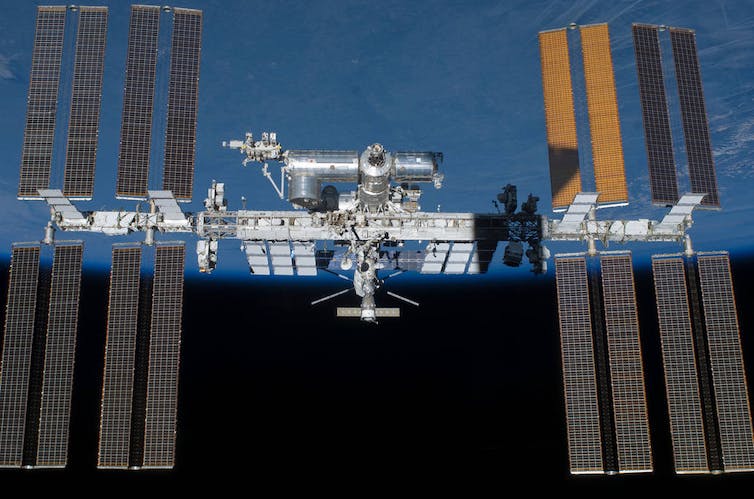 A STS-134 crew member on the space shuttle Endeavour took this photo of the ISS after the station and shuttle began their separation. NASA

On Nov. 2, 2020, the International Space Station celebrated its 20th anniversary of continuous human occupation. With astronauts and cosmonauts from around the world working together, the ISS has demonstrated humankind’s ability to not only live and work in space but cooperate with one another. This remarkable achievement is significant as countries and companies around the world look to expand space exploration beyond Earth orbit.

The path to this anniversary was not easy; like most things done in space, the cost and the difficulty were high. Supported by the Reagan administration as part of the Cold War competition with the Soviet Union, the ISS began its life in the 1980s. Following the Challenger disaster in 1986, planning fell by the wayside as costs increased. Facing delays and cost overruns, the space station – then known as Freedom – was nearly canceled by the House of Representatives in the early 1990s. While already bringing international partners aboard to lower costs, the Clinton administration invited Russia to participate, leveraging the station as a tool of foreign policy between former adversaries.

What began as competition has turned into fruitful cooperation not just between Russia and the United States but Canada, Japan, Italy, the European Space Agency and over 100 other countries. As a space policy expert, I argue that the achievements of the ISS to date are indeed significant, but they also point the way ahead for cooperation and commercialization in space. 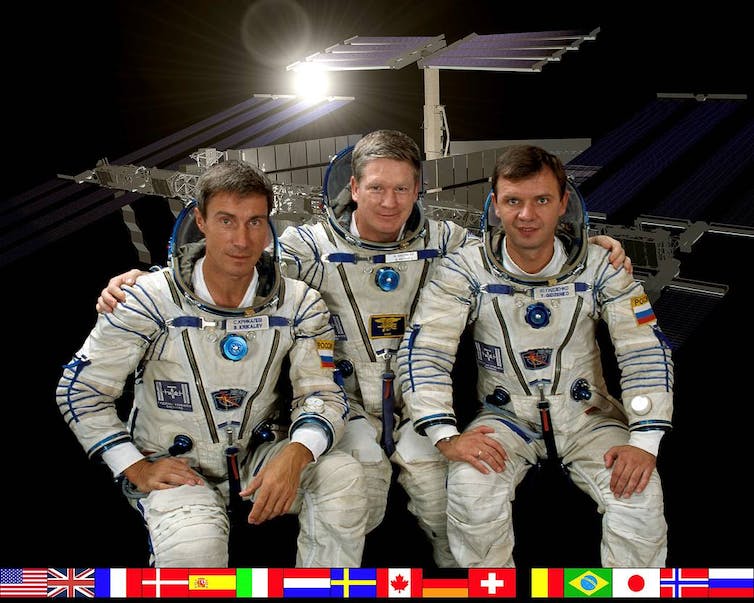 The official portrait of the Expedition 1 crew (from left to right, Sergei K. Krikalev, William M. Shepherd and Yuri Pavlovich), the first humans to live aboard the International Space Station. Arriving on station on Nov. 2, 2000, they were the first of 64 crews to live and work aboard the orbital laboratory. NASA/JHUAPL/SwRI

By the numbers, the International Space Station is indeed impressive. At 357 feet in length, it is just one yard shy of an American football field. More than 241 individuals from 19 countries have visited, and at least 3,000 research projects have taken place on the ISS. The ISS is the third brightest object in the night sky and can often be spotted worldwide. Even Lego has immortalized the station with its own building set.

The ISS has proven that humans can live and work in space. These experiences are key as countries look to longer term exploration. The ISS has led to advances in understanding how the human body reacts to sustained microgravity and increased exposure to radiation. Other experiments have allowed researchers to study materials and chemicals in a microgravity environment. Astronauts have also learned how to grow food on the station, leading to insights on how plants grow on Earth.

These accomplishments have not come without criticism. It cost more than US$100 billion to construct; some have questioned the amount and value of the science that has been conducted. More recently, limits on the the number of crew residing on the station have reduced the amount of time available for scientific experiments.

However, perhaps one of the most significant legacies of the ISS is the long-term cooperation that has enabled it. While the U.S. and Russia are the countries most closely identified with the program, Canada, Japan and the European Space Agency also take part. While not always easy, sustained cooperation in a place where operations are difficult and costly is impressive.

For the U.S. and Russia in particular, this achievement is unique. While there was some cooperation between the two during the Cold War, the ISS is the first major space program in which the two have worked together. Even as relations between Russia and the U.S. have deteriorated over the past several years, the partnership on the ISS has continued. While scientific and space cooperation does not solve all terrestrial issues, it can strengthen other diplomatic relationships.

The future of the ISS

Though turning 20 may not seem like a milestone, for a complicated piece of machinery operating in the dangerous environment of space, the ISS is approaching old age. In recent years, it has suffered several problems, most recently an air leak in the Russian module, Zvezda. However, recent assessments support continued operation of the ISS for at least another 10 years. 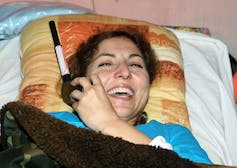 The world’s first female space tourist, Anousheh Ansari, on Sept. 29, 2006 after she and the two crew members of the 13th International Space Station mission landed in the steppes of Kazakhstan. AFP via Getty Images

In that time, the ISS will likely see an increase in commercial activity. Recently, cosmetics company Estee Lauder launched one of its products to the station to be featured in a commercial filmed there. SpaceX is looking to make the ISS a tourist destination following NASA’s 2019 decision making it easier for space tourists to visit. Another space company, Axiom, recently received a contract to build a commercial module to be added to the ISS in 2024. The module would give additional living and working space to astronauts aboard the station as well as serve as the starting point for a future commercial space station.

[Deep knowledge, daily. Sign up for The Conversation’s newsletter.]

Thinking beyond Earth orbit, international cooperation in the ISS provides a solid example for future cooperation in space. As NASA seeks to return to the Moon, international cooperation will be a way of reducing costs, normalizing behavior in space and increasing national prestige. NASA has made efforts in these areas through the Artemis Accords, an agreement outlining norms and behaviors for lunar exploration. Additionally, NASA is partnering with the European Space Agency and others on its plans for the Gateway, a mini-space station in lunar orbit. The ISS experience has been fundamental to all of these developments as it continues to launch the next generation of space endeavors.