The Biden administration has promised to help alleviate some of the underlying problems, particularly vaccine shortages in some areas and inconsistent deliveries that have upended appointment scheduling.

For many people, trying to get the COVID-19 vaccine has been a lesson in frustration. The vaccine supply is limited in many areas, creating confusion over who can get a first and sometimes second dose of vaccine. Even when given the green light because of their age or occupation, many Americans have no idea how to go about getting vaccinated.

Nationwide, 6 in 10 older adults reported in a recent survey that they didn’t have enough information to know when or where they could get the vaccine. Those that do locate appointment systems are often finding them hard to use, and some have faced cancellations.

The Biden administration has promised to help alleviate some of the underlying problems, particularly vaccine shortages in some areas and inconsistent deliveries that have upended appointment scheduling. But the federal government doesn’t control the vaccination process within states or communication about it, and many states have pushed those decisions to understaffed counties. Currently, fewer than two-thirds of all vaccine doses distributed to the states have been administered, suggesting the problems go beyond supply shortages.

Some states are doing better than others, and they can offer lessons for the rest. And another Biden administration proposal could also soon connect more people with the vaccine and improve communication: activating more pharmacies to help.

How to know when and where to get vaccinated

UCHealth set up a vaccination drive-up center at Denver’s Coors Field, but participants still needed to register and have an appointment. Michael Ciaglo/Getty Images 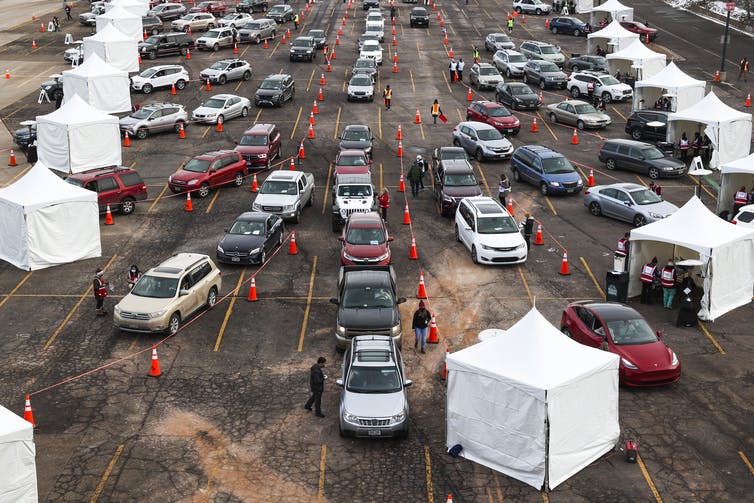 Unfortunately, there isn’t one satisfying answer to this question right now. The federal government recommended priorities based primarily on age, preexisting health conditions and jobs that create a greater risk of exposure, like medical personnel. But states are following through in different ways.

To find your state’s information, you can check the Centers for Disease Control and Prevention’s list of state links. Or enter the name of your state and “COVID vaccine” in your favorite search engine to find out whether your state has a centralized process or whether each county or city maintains its own priority system.

UCHealth set up a vaccination drive-up center at Denver’s Coors Field, but participants still needed to register and have an appointment. Michael Ciaglo/Getty Images

Where vaccination efforts are succeeding

A few states that have done well with vaccinations can offer lessons for the rest.

West Virginia vaccinated all of its long-term care residents and staff who wanted the vaccine within three weeks and started on second doses before other states had finished the first round. It had been the only state to opt out of the federal vaccination partnership with CVS and Walgreens for long-term care residents, instead relying primarily on a network of independent pharmacies.

The state also centralized vaccine decisions, coordination and registration at the state level rather than having West Virginia counties and localities come up with their own rules and processes. This eliminated a lot of the confusing messages and conflicting priority lists. Not everything was perfect. There were still problems with canceled appointments, particularly for groups using a troubled new appointment management system created for the CDC called the Vaccine Administration Management System.

North Dakota, which has had one of the highest COVID-19 case rates in the nation, expanded its priority list early to include anyone 65 and older, as well as adults with at least two high-risk medical conditions and front-line school or child care workers. It maintained its own warehouse to store and manage vaccine supplies, which allowed it to more easily send vaccine to providers across the state instead of only hospitals and health systems, as most other states were doing. It also deployed independent pharmacies to vaccinate people in long-term care facilities.

New Mexico credits its success in large part to a website that matches registrants with providers who have available vaccine and arranges appointments accordingly.

These three states have small populations, making the logistics somewhat simpler than in more populous states, but their approaches to vaccinating residents have worked.

Looking outside the U.S., Israel leads the world by far in vaccination rates, having vaccinated over half of its 9 million citizens. A strong public health system that treated vaccination efforts as a national security issue was key. Early preparation including aggressive acquisition of vaccines and allowing anyone over 60 to be vaccinated were also important strategies.

Why pharmacies could be a game changer

In many states, local pharmacies remain an untapped community resource for vaccination information.

With about 67,000 sites across the U.S., community pharmacies are highly accessible and experienced at administering vaccines due to their long history of providing vaccinations for flu and other preventable illnesses.

They also have established relationships with the communities they serve, often with staff who reflect the community’s ethnicities. This is critically important for improving the low vaccination rates among minorities.

States and counties can leverage this relationship to reach patients with information about when and how they can be vaccinated. Pharmacists have access to older and underserved patients who may have difficulty accessing and navigating websites. They can also help address questions about the vaccines from people who may be concerned after hearing rumors and misinformation. If people aren’t getting vaccinated, that could put herd immunity and a return to normal in jeopardy.

Vaccination is critical to slow the spread of new and more contagious virus variants and hopefully prevent the development of vaccine-resistant mutations. The president’s plan includes securing enough Pfizer and Moderna vaccines for everyone in the U.S. to receive both doses by the end of summer, provided the doses are distributed effectively.