The protesting farmers are demanding that at the very least the status quo be maintained.

India is witnessing a historic mass mobilisation of farmers against three new farm laws. The country’s government maintains that these laws are the cure for a longstanding agrarian crisis. While this claim has been analysed from several angles, the environmental angle has often been overlooked. This is no small oversight since the agrarian crisis in India is underpinned by strong environmental vulnerabilities, including those associated with climate change.

The three laws at the centre of the current storm are focused primarily on prices of agricultural produce, marketing channels, and the role of middlemen. Unfortunately, environmental aspects – cropping patterns, irrigation and other agricultural practices – that are fundamental to the sustainability of agricultural systems are not being addressed. Agriculture is highly susceptible to fluctuations in temperature, excessive and untimely rains, floods, droughts, pests, diseases and so on. In recent years, such extreme weather events have been aggravated by climate change.

All this is exacerbating water security. Much of India’s agriculture continues to be fed by rainfall rather than canals, wells and tube wells, which means a short growing season of only 2.5 to 6 months. Even the well-irrigated regions in the north west and south east where the 1960s green revolution massively increased yields, are now experiencing groundwater depletion. For example, Punjab’s vast fields of wheat and rice are rapidly developing desert-like conditions. 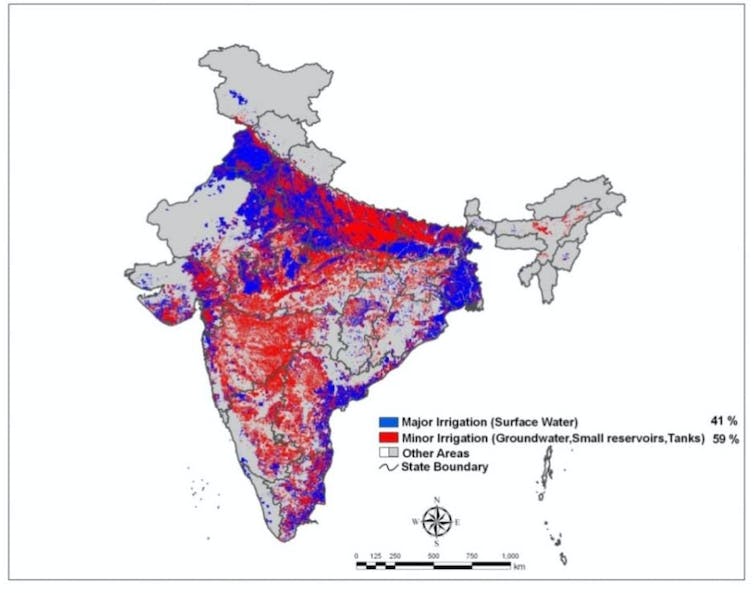 Large scale irrigation (blue) is concentrated in the north west of India and along its east coast. Much of the country relies on rain rather than irrigation. Thenkabail et al, CC BY-SA

On top of this, agro-biodiversity is in decline as only a handful of strains of a few crops have come to dominate. And the country’s soil is becoming less and less healthy. India now loses 15 tonnes of soil per hectare each year, eroded away by wind or water.

As a result, crop yields are largely either stagnating or declining. To improve yields, farmers have been intensifying the use of chemical fertilisers, pesticides and fuel, adding yet another dimension to the environmental challenge before us and making cultivation more expensive. Meanwhile prices of inputs such as seeds, fertilisers and labour have been rising steadily and prices at which farmers can sell the crops are either stagnant or increasingly unstable.

Together, these issues have pushed farmers into debt and distress. Many have abandoned their farms, moved to cities or even been driven to suicide. This is particularly true of small-scale landholders who, alongside the landless labourers, have been the worst affected. 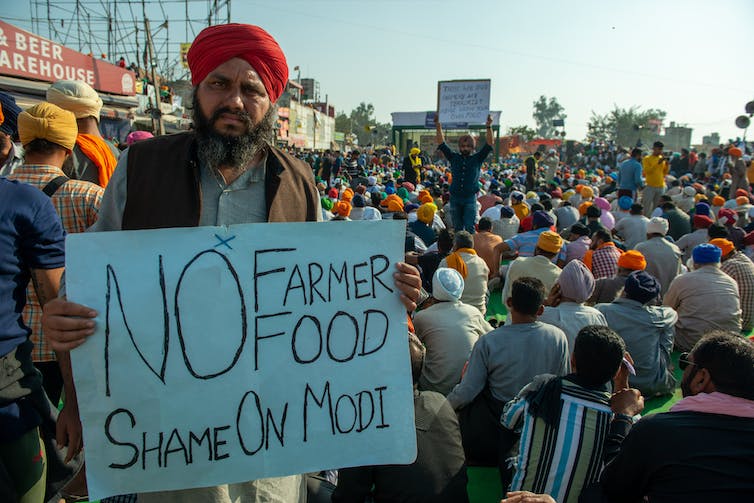 In the northwest breadbasket states of Punjab and Haryana, this stagnation is exemplified by the continuous cultivation of wheat and rice as the winter and summer crop respectively, for many decades now. The practice is widely recognised as environmentally unsustainable, but farmers have persisted because these are the only crops where they receive an assured minimum support price (MSP) through public procurement systems. So even though crop diversification has long been recommended as a response to the environmental challenges, farmers are still sticking with wheat and rice.

There are more climate-resilient and less water-intensive crops that would be better suited to particular regions, but farmers won’t start growing them until they get the kind of state support currently extended to wheat and rice in northwest India. Far from doing this, the new farm laws are in fact likely to undermine the procurement systems and regulated market yards through which such a change could be achieved. In the absence of an assured minimum support price that covers actual farm costs, farmers have no incentive or means to shift to relatively more desirable agricultural crops and practices.

Many farmers are also concerned that the new laws will leave them vulnerable to exploitation by corporate agribusiness and at risk of losing their land. Only time can tell how these concerns play out if the laws are implemented. However, if the spectre of corporate-led industrial farming – envisaged in the new laws – becomes a reality, it could further amplify the environmental crisis in India’s countryside. Empirical evidence shows that widespread monocultures and intensive cultivation practices, which are promoted by industrial farming, have intensified ecological fragilities in various regions of the world.

There is no denying that India must respond to the agricultural crisis by moving towards a more inclusive, equitable and sustainable system. The protesting farmers are demanding that at the very least the status quo be maintained. Even this is not without its environmental and social contradictions, but the new laws, if anything, might make conditions worse.