As the Biden administration gets started, Modi may be forced to change course.

Earlier this month, President Joe Biden of the United States spoke to PM Narendra Modi for the first time since coming to office. It’s the start of a new chapter in the relationship between India and the US. But while Modi and Donald Trump seemed natural allies, Joe Biden is a very different president.

According to a statement from the White House, with details of the conversation:

“The President underscored his desire to defend democratic institutions and norms around the world and noted that a shared commitment to democratic values is the bedrock for the U.S.-India relationship.”

Yet, only two weeks later, Modi is showing even less “commitment to democratic values” than ever. He has failed to listen to the demands of the protesting farmers, and there seems to be no resolution in sight. The police have arrested a number of journalists for their coverage of the protests, as well as 22-year-old activist Disha Ravi. The crackdown on dissenting voices has stepped up, and today anyone who speaks out against government policy is seen as a threat.

Donald Trump had no interest in human rights, or even democracy. Despite international condemnation of Modi’s actions in Jammu and Kashmir in 2019, the US remained silent. But now things are different. In his first weeks in office, Joe Biden has already overturned many of Trump’s rulings on foreign policy, such as reinstating aid to Yemen and cutting arms sales to Saudi Arabia.

This is a president who makes it a priority to strengthen democracy around the world, as well as in his own country. How can he build a relationship with a Prime Minister who has brought democracy in India to its knees?

Biden has already spoken out against the persecution of religious minorities 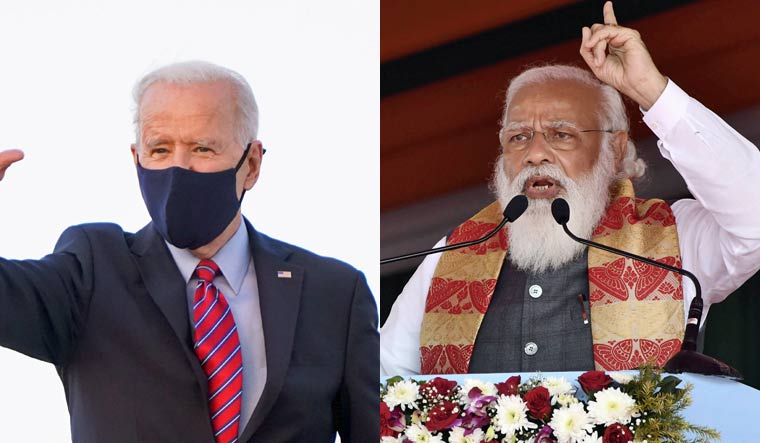 If Joe Biden continues to defend democratic values on a global level, as he promised in his election campaign, Modi has good reason to be concerned.

When Donald Trump visited Delhi in February 2020, riots against Muslims broke out in the city. He did not even mention it. But Biden is different: before his election, he had already expressed his dissatisfaction with the Indian government’s move away from secularism and towards greater discrimination against religious minorities.

“Joe Biden has been disappointed by the measures that the government of India has taken with the implementation and aftermath of the National Register of Citizens in Assam and the passage of the Citizenship Amendment Act into law. These measures are inconsistent with the country’s long tradition of secularism and with sustaining a multi-ethnic and multi-religious democracy.”

If Modi continues along the same course, the relationship with America may become much more challenging. India has always been a valued ally in the region, particularly with regard to China. But, as a report from Freedom House noted, “the Indian government’s alarming departures from democratic norms under Prime Minister Narendra Modi’s BJP could blur the values-based distinction between Beijing and New Delhi.”

The first months of 2021 have clearly demonstrated that Modi is still showing little inclination to defend the democratic norms of secularism. The laws against “love jihad” mean that a Muslim man can be imprisoned for marrying a Hindu woman. A Muslim comedian from Mumbai was arrested for a joke he had made nearly a year earlier that was, allegedly, offensive to Hindus. Social media spread fake news that Disha Ravi, the young activist arrested for sharing a document with suggestions on how to support peaceful protest, is a Christian – and this, in itself, was enough to fuel the anger of Hindu nationalists.

Every day, religious tensions are growing because the government is no longer supporting the idea of a secular India as laid down in the Constitution.

The situation in Kashmir

For the international community, and the US in particular, one of the key issues is the situation in Jammu and Kashmir.

Biden has stated: “The Indian government should take all necessary steps to restore rights for all the people of Kashmir.  Restrictions on dissent, such as preventing peaceful protests or shutting or slowing down the Internet, weaken democracy.”

Meanwhile Kamala Harris, America’s first female Vice-President, has been clear on her own position:

“We have to remind Kashmiris that they are not alone in the world,” she said in October last year. “There is a need to intervene if the situation demands.”

Since then, little has changed for people in the region. Internet connections remain painfully slow, and the government still imposes a complete communication shutdown whenever it sees fit; before Republic Day this year, all mobile internet services were blocked.

There has certainly been no improvement when it comes to free speech. Harassment and intimidation of journalists in the region soared in 2020, to the extent that it is no longer an attack on individual writers, photographers and news organisations but on journalism itself. Journalism “is being killed with selective usage of laws and other methods,” according to one journalist, Altaf Hussain, who used to report for the BBC.

Both India and the US benefit from the good relationship between the two countries, particularly in the face of the threat from China. They need each other, when it comes to both diplomacy and trade agreements.

But today, as the US focuses increasingly on strengthening democracy, the cracks in the relationship are all too apparent.  The international community has been critical of the government’s handling of the situation in Kashmir, and now the farmers’ protests have put India in the spotlight again. In both cases, India looks like a democracy in name only, with a deteriorating human rights record.

Mutual support against China is crucial. But India’s moral superiority to its powerful neighbour is becoming more and more precarious. Biden needs to consolidate an international alliance of democracies that can stand up to China and exert pressure when it comes to human rights issues. He cannot do this if one of his closest allies is overtly undemocratic.

Five US presidents have visited India over the past decade; connections between the two countries remain strong. Could the influence of the new Biden administration be enough to contain Modi’s authoritarianism, and rebuild the pillars of Indian democracy? It will certainly play a role in India’s politics in the years to come.