In the face of global environmental crisis and India’s crisis of democracy, hope lies in the small-scale revolutions.

Piplantri is a small village in Rajasthan. Today, it is a green oasis in a semi-arid landscape. Fifteen years ago, it looked very different: ““In 2005, the drought was so bad the government had to send us water trains,” says Shyam Sundar Paliwal, the local sarpanch or elected village chief.

The trees on the hills had been cut down to make way for marble mines. The effects of climate change meant less rainfall, and local farmers were struggling to produce enough to feed their own families.

And this wasn’t the only problem in Piplantri. Girls were considered to be a curse rather than a blessing – so much so that when a girl was born a relative would push a sharp grain into the baby’s mouth, hoping to start an infection that would lead to her death. Families would marry their daughters off as early as possible, to rid themselves of the burden of another mouth to feed.

Today, it’s a very different story. Now the birth of a girl is celebrated. Girls are educated in the same way as their brothers. Their lives are valued equally. Women have become community leaders.

In just over a decade, everything has changed.

Fifteen years ago, Piplantri was a desert 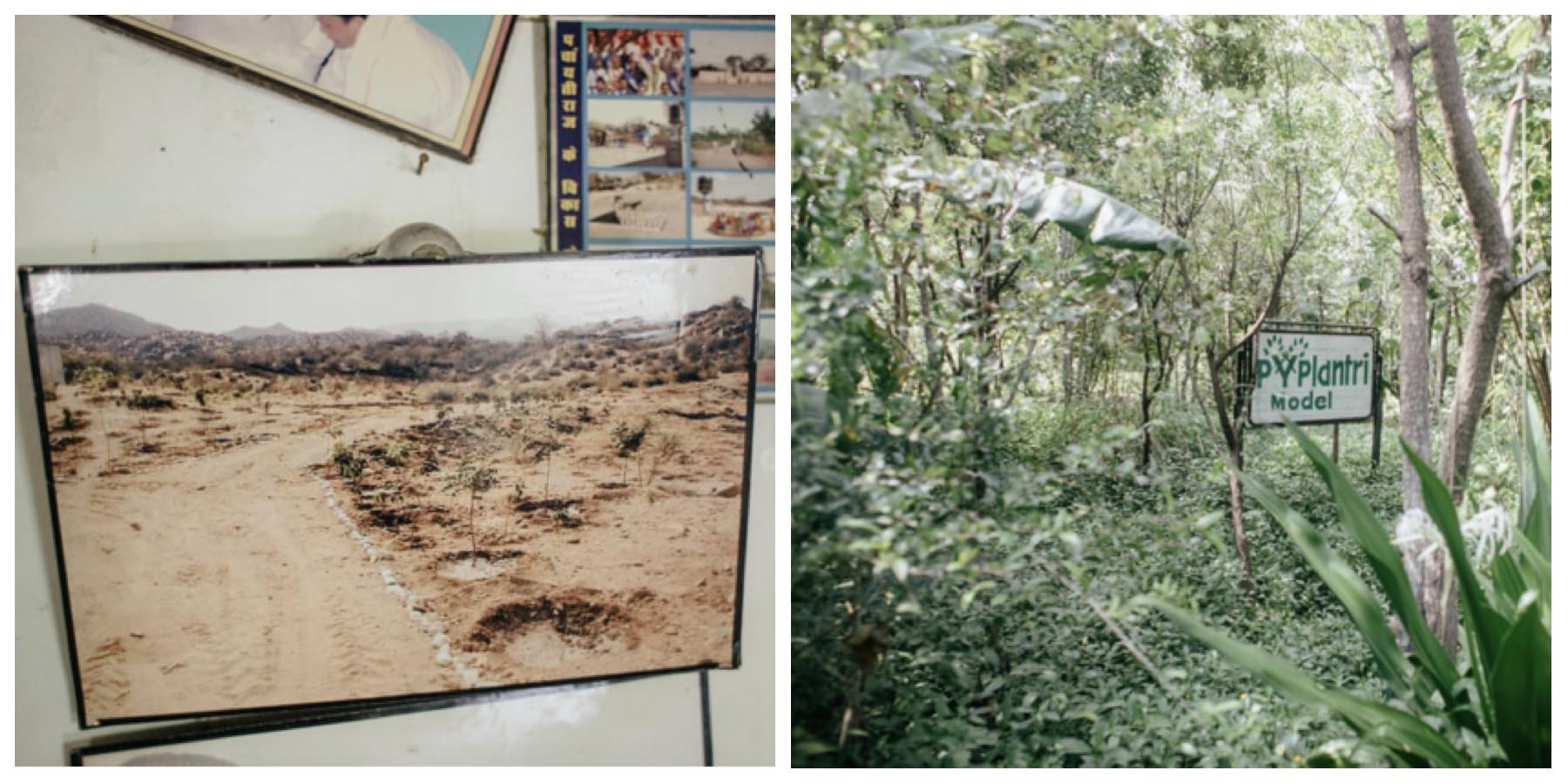 Two years after Shyam Sundar Paliwal was elected as village leader, in 2007, his 17-year-old daughter Kiran suddenly died as a result of illness. To honour her memory, Paliwal decided to plant a tree in her name – a burflower, that now stands tall at the entrance to the village.

Losing his beloved daughter made Paliwal determined to change local attitudes to girls, and show other families that daughters should be valued as much as sons.

It’s a problem throughout India: boys are the ones who grow up to support their families, while girls are simply a financial burden, requiring a dowry when they marry. As a result, parents treat their sons like little princes, giving them the best education they can afford.

Girls are an afterthought. Their education is not considered a priority; many don’t go to school at all. They work hard at home to help with cooking and cleaning, and in many cases are married off as young as possible. Girls are seen as paraya dhan (someone else’s wealth), and child brides require smaller dowries: as a result, India still has the highest rate of child marriage in the world, with 27% of girls married before their 18th birthdays.

In Rajasthan, that figure rises to nearly 50%. And girls who marry so early are at far greater risk of domestic violence and abuse.

111 trees for every girl

When Paliwal planted the tree in memory of Kiran, it gave him an idea. For every girl born in Piplantri, plant 111 trees in the village. One hundred and eleven is an auspicious number for Hindus, connecting spirituality with both honouring girls and caring for the environment.

Now, new mothers place their baby daughters in baskets lined with red cloth and take them to the place where the saplings are planted. It is a ritual that brings people together, and one that the whole village looks forward to. And, already, it has led to the birth of a new forest: with around 70 girls born in the village every year, that’s nearly 8000 new trees – mango and neem, sandalwood and peepal.

“With this, I’m doing two things: showing joy at the arrival of a daughter and honouring the land where my ancestors lived and died,” says Paliwal.

Protecting the rights of girls

This generation of girls is treated with respect

Paliwal quickly took the idea further. Now, when a girl is born, the community comes together to start a sort of “trust fund” for the new baby, with a total of 31,000 rupees. The girl’s parents contribute one third, while the rest of the village makes up the rest. With this money, the girl is no longer seen as a financial burden.

In addition, the girl’s parents sign a legal agreement that their daughter will receive a proper education, and will only be married after the age of 18.

As the girls grow up, they remain connected to their trees, returning every year to tie rakhi bracelets around their trunks during the Raksha Bandhan festival as if they were brothers.

This generation of girls is treated with respect, and that means that they learn to respect themselves and become contributing members of the community. One of the first girls to have trees planted in her name, Nikita, is now fourteen years old. She dreams of becoming a doctor and working with people in deprived areas.

A desert becomes an oasis

Respecting each other and respecting the environment go hand in hand. Paliwal has a keen awareness of how all these issues are interconnected: “For me, everything is linked: the girl child, the land, water, animals, birds, trees. I seek immortality through these trees,” he says.

At the turn of the century, Piplantri was a dusty desert. Now – although mining still continues on the nearby hills – the area is green, and villagers take delight in the beauty of their environment and the return of the wildlife. Careful rain water harvesting means that they no longer have to fear droughts, and a new women’s cooperative makes products from aloe vera.

The people have tended the forest, and now the forest is repaying them in kind. They harvest gooseberries and mangoes, bamboo and honey, and that creates more work, more income. The natural resources have become wealth. 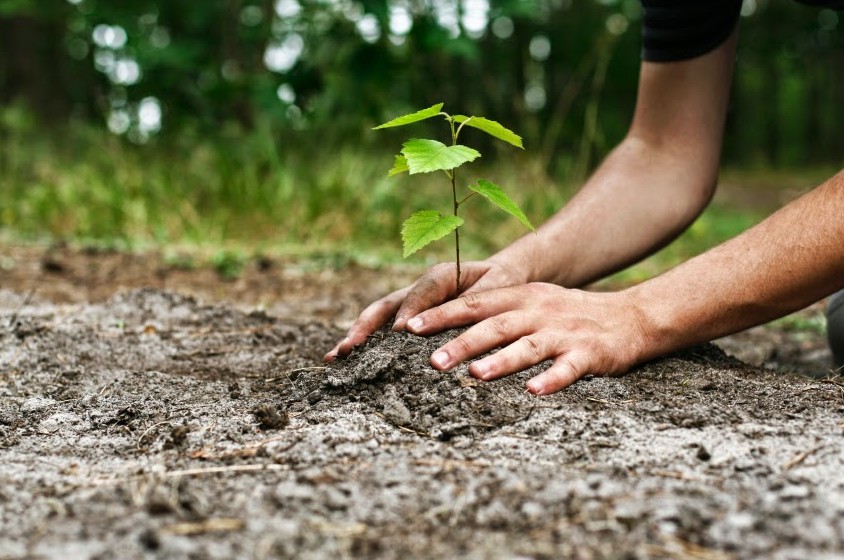 Piplantri has become an example of how communities can reap the benefits of living in harmony with the natural world, and of honouring girls as well as boys. There is a training centre, and workshops teach others how to recreate the village’s success.

There are practical steps that can be learned and followed, awareness-raising on gender equality, and education on water and forest management. But beyond that, and bringing it all to life, is the sense of emotional and spiritual connection. "When you attach it to tradition and make trees like family members, it makes sense emotionally," says Nimisha Gupta, a local district administrator.

For some, it’s an ideal example of eco-feminism in practice. For others, it’s the healing of a return to a more connected way of living, of communities working with nature rather than seeking to subdue it. For Shyam Sunder Paliwal, it’s a fitting tribute to the memory of his daughter.