Being able to distribute disaster information can be a matter of life or death.

Can a butterfly in Chicago cause a tornado in Hong Kong? A metaphorical concept called the “butterfly effect” describes the sensitivity of a system to minor changes. The use of this concept has grown significantly in many technical fields, such as information technology and computer science. We wondered if it was applicable to emergency communications.

As part of a new study, we interviewed bilingual migrants in Florida. Looking at data from 10 languages, we noticed how minor deviations in translation can cause significant differences in understanding. Such misunderstandings can have catastrophic consequences.

Clear language is essential in emergency communication. Being able to distribute disaster information can be a matter of life or death. We’ve seen how migrant communities are often hit harder than others by disasters, such as in Hurricane Katrina, when many failed to evacuate in part because storm warnings were broadcast mainly in English. Many migrants to the U.S. do not arrive with a clear understanding of basic hazard terms in English, such as “hurricane” and “tornado,” that are used by local weather channels and in emergency communications.

This is a simmering public health issue, with clear implications for migrant communities. This kind of failure in emergency communication can be described as disaster linguicism – language-based discrimination that minorities can face during disasters.

Around the world, people use different words for similar – but not always identical – weather phenomena. Created with wordart.com 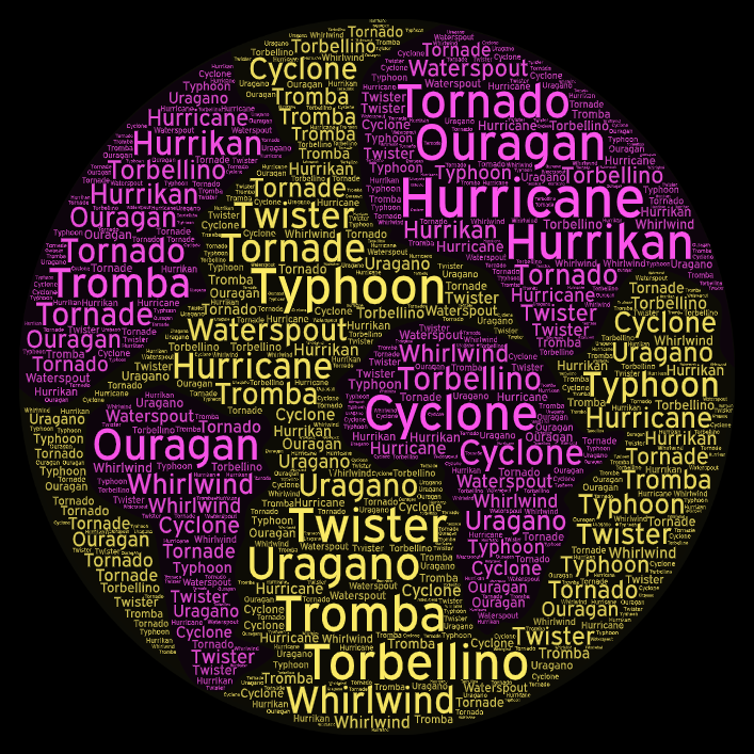 What forecasters call a “hurricane” in the U.S. might b

e called a “cyclone” or “typhoon” in other countries. But they are all the same natural phenomenon.

The word “typhoon” has an Arabic origin, “tawaphan,” but the word in Arabic means “flooding.” The word also can be found in Persian as “tophan,” where it means a “rainstorm.” The word exists in Hindi as well, “toophan,” and simply means a “storm.”

The two words “tornado” and “hurricane” are translated into the

same word in Arabic, “iiesar.” But this word describes only a circular movement of wind. The term used in Arabic to describe a hurricane is “iiesar bahri,” which is translated back to English as “sea cyclone.”

Misunderstanding can go in the other direction as well, leading to unnecessary panic. The word “hurricane” assumes a certain cultural context around the world. This is mainly due to media coverage of actions taken by the U.S. government during hurricanes. Because of this, migrants from India might assume that hurricanes are more destructive than cyclones if they compare the U.S. government response to hurricanes to the Indian government response to cyclones.

enomena is altered. This can spread panic among migrants, which can be as hazardous as not being prepared during emergencies.

The problems do not end with “hurricane” and “tornado.” We found similar issues arising with terms used to describe seismic events, monsoonal dust and sand storms. And we are only scratching the surface. Our data are limited to 10 languages out of more than 7,100 spoken languages around the world.

Around the world, people use different words for similar – but not always identical – weather phenomena. Created with wordart.com

Our data demonstrate the importance of careful attention to language choices in emergency communications. The gaps that we have observed can cause linguistic minorities to confuse one natural hazard with another, quite possibly leading to the wrong preventive measures.

Writing and translating emergency communications with cultural sensitivity can avoid some of these disadvantages and the potential for unintentional harm.

Beyond overcoming translation barriers, there are opportunities to promote inclusive dis

aster preparedness that doesn’t leave anyone behind. Emergency communication should be tailored to the needs of local communities. This can happen only when a strategy for action is created collaboratively with the community and is actually followed.

In the U.S., 67 million people speak a foreign language in their homes. Communicating in different languages and understanding the original cultural context might sound like a lot of work, but local communities can and do help support such initiatives.

osition toward justice, equity, diversity and inclusion. Now, the opportunity to support communities through linguistic inclusion can make an important contribution to broader public health efforts.

[Understand new developments in science, health and technology, each week. Subscribe to The Conversation’s science newsletter.]

This article is republished from The Conversation under a Creative Commons license.