Civil society has championed solidarity during this historic episode, and as often, women’s initiatives have appeared to be at the forefront. Not because of “natural” female altruism or solidarity, but because their assignment to social reproduction functions simply leaves them with little choice.

The Covid-19 pandemic brought tragedy in India, especially at the outset of the crisis. The situation is far from over, and as elsewhere, women have been heavily affected.

Small traders, home-based workers, informal recyclers and domestic workers have lost their jobs on a huge scale. School closures, which continue in some states such as Tamil Nadu and Maharashtra, and the return home of interstate migrants due to lockdown restrictions, have resulted in an overload in domestic work. Cramped housing, anxiety about what is still to come, and the ban on alcohol sales had left women more vulnerable to domestic violence.

The Indian government has been a key player in this tragedy. Observers have noted that the lockdown was imposed with unheard-of brutality and cruelty. According to some estimates, up to 100 million inter-state migrant workers were given just a few hours to make their way home.

At the same time, government support measures such as distributions of food and gas cylinders, cash transfers and subsidised loans have proven inadequate or are impossible to obtain.

Had these measures been put in place differently, these might have changed the situation for many women, as well as migrant workers, discriminated minorities and all informal workers.

Civil society has championed solidarity during this historic episode, and as often, women’s initiatives have appeared to be at the forefront. Not because of “natural” female altruism or solidarity, but because their assignment to social reproduction functions simply leaves them with little choice.

In response to the hunger crisis, collective kitchens have prepared and offered meals. Local self-help groups have produced masks and popularised sanitary rules. Women’s trade unions have continued their longstanding combined roles of rights-based campaigning alongside offering goods and services to those in need, distributing food and various forms of material support to the most destitute.

Beyond structured collectives, middle-class women have also become involved, as have feminist organisations, of which there are a great many in India. They have investigated and documented the nature of the pandemic; supported and initiated women’s collectives; demonstrated against the apathy and contempt of the government and demanded local and national emergency plans.

Beyond emergency measures and charity, there have also been forms of self-organisation. These have involved self-help action, and rebuilding local economic circuits. We observed such work in a rural region of Tamil Nadu in South India, where we have conducted field surveys for almost 20 years. We carried out a series of interviews from March 2020 to today, first by telephone and then in person. This work has allowed us to grasp some fragments of the daily life of the pandemic.

After the shock came adaptation and self-organization

A farmer in the village of Murkata, in northeastern India, on December 23, 2020. Biju Boro/AFP 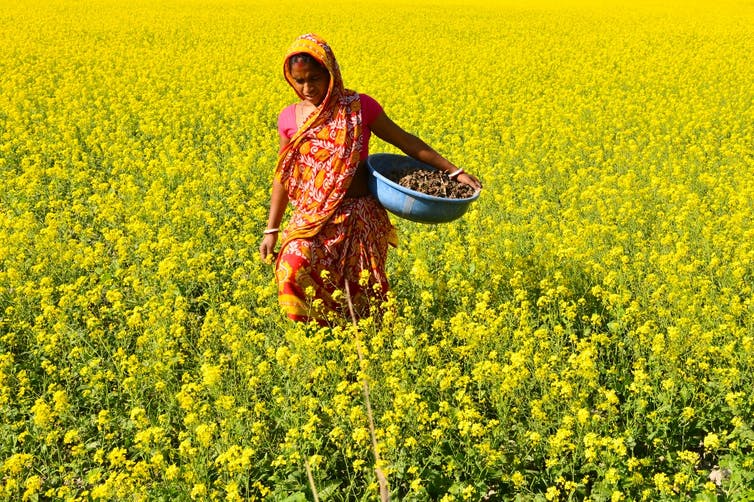 “Everything is collapsing”, is something we were often told during the first weeks of the lockdown. Its harshness and speed turned lives upside down. Male migration to cities, construction sites, and labour-intensive agricultural regions had at that time become an essential component of family income and mobility aspirations.

As with other moments of acute crisis such as times of wars or famines, a reorganisation of the sexual division of labour took place. In this instance, women became the cornerstone for family survival. With few exceptions, urban incomes – most of which are earned by men – have evaporated. Commercial agriculture had been steadily gaining ground in recent decades, making India one of the world’s leading exporters of products such as rice, meat, spices and cane sugar. It was severely affected when sales channels and agribusinesses came to a standstill.

The only alternative was subsistence agriculture using crops such as rice, sorghum, millet and vegetables, which is more often based on local circuits. Such agriculture had become devalued by modernisation and become highly feminized. Now it has proven its full usefulness: feeding families and creating employment.

Women have moreover been campaigning for landowners to revive production on their fallow land to create local work. They have been negotiating a return to manual, more labour-intensive techniques, be it for irrigation, ploughing or harvesting. The women share this work and accept small payment or payments in kind. They reinvent local sales channels – the markets were closed for over six months, leading to the proliferation of itinerant or temporary roadside sales. Some men help out, while others leave this survival business to women.

Women have also been sharing food with their neighbours. They cook collectively, sometimes with outside support. They will queue for food for hours at public distribution points, which as cornerstones of Indian social policy have proven highly valuable during the crisis, albeit with very different results depending on the region.

One key concern is that the government’s still-suspended public employment program, which is a cornerstone of Indian social policy. The most fortunate women, who are often the richest as they are supposedly more “creditworthy”, have been able to access specific subsidised Covid loans, to buy livestock or to pay off debts. But as elsewhere in India, the promised cash transfers have only reached a tiny minority.

In recent decades, Dalit families had slowly managed to break away from their dependency on high-caste landowners. During the crisis, women returned to knock on the doors of their former landlords, begging for a little rice or to pawn their jewellery. They cook only local vegetables and have gone back to picking wild plants. During the strict lockdown, they negotiated with the police to be able to move around, more or less successfully. They have also campaigned against harassment from financial companies seeking their dues.

The men, who had previously been away due to migration, are now also at home. Some are proactive, trying to get a few hours or days of work here and there, including as daily agricultural labourers, which had been a denigrated occupation and left to women. But many now seem shattered, as though in shock, and most certainly threatened in their masculinity due to the sudden loss of their role as breadwinner. “We are not ashamed,” the women regularly say when we ask them about this apathy among the men.

Which changes will last? 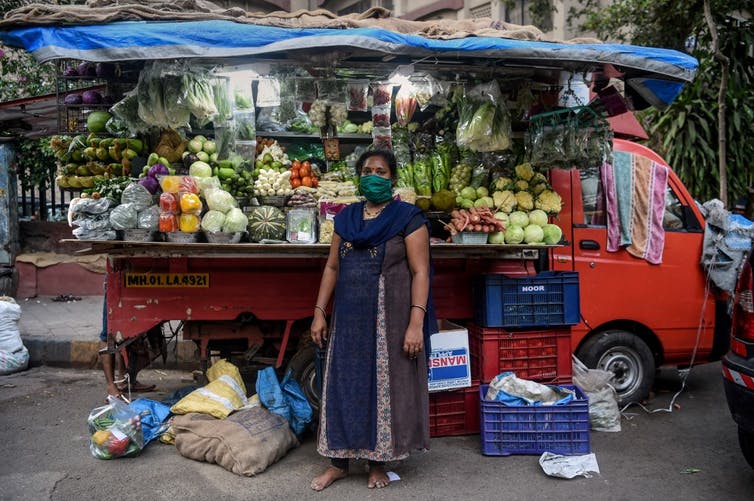 It is crucial not to idealise this female activism. It has not been able to prevent impoverishment, deprivation or malnutrition, and it has certainly involved a degree of anguish, conflict and domestic tension. The crisis has been rekindling preexisting inequalities, including among women and at the village level. Such inequalities are based on class, caste, religion and generations. Solidarity among women is very selective, and it is often easier to show solidarity when one is better off. It runs alongside the reemergence of old forms of patronage and dependency.

The fact that the women are active on all fronts is a source of some pride to them, but it does not seem to have brought them any particular respect. They are simply doing what is expected of them, at all times and in all places, namely ensuring the social reproduction of their families. But something else is also at stake here. In their daily efforts to survive the pandemic, they have actively helped to rebuild local economies and short circuits, which had been dismantled in recent decades by the liberalisation of agriculture, the rise of agribusiness, competition from cheap vegetables and cereals, or from hybrid imported varieties from other Indian states.

The future remains to be seen, of course, and it will be the conjunction of multiple forces on different scales. Male migration has now resumed and will continue. Local opportunities are too scarce, given the extent of needs to pay for consumption, health, education and social and religious rituals. The commodification of social reproductive needs condemns families to high debt and proletarianization.

It is however possible that fundamental changes will continue. Today, six months after the end of strict lockdown, the revitalisation of local economies is still at work. The makeshift roadside stalls that were cobbled together during the pandemic are still standing, many offering local vegetables and grains. Buyers appreciate this local business embedded in personal relationships. Demand for local products also seems to be driven by the middle and upper classes in neighbouring towns, who have been become aware through the pandemic of the benefits of healthy, local food.

Since August 2020, Indian farmers, both men and women, are campaigning on an unprecedented scale against new agricultural laws that will precisely strengthen the power of agribusiness. We should not labour under any illusions. And none of this hides the tragedy of the pandemic, whose ravages are obvious. Without massive political support, the future of the initiatives described here remains very unsure. But it is crucial to be attentive and to take note of potential horizons of change and “emergences”. Paying attention to daily mobilisations, including those on the margins, as here, is an essential way to nourish the broader mobilisations that are sorely needed if we are to think about alternative pathways and build the world of tomorrow.