India’s losses in 2020 accounts for 60% of the global increase in poverty.

No country in the world has remained completely unscathed from the coronavirus pandemic, but few have suffered more than India, according to the latest report by the Pew Research Center.

In 2020, 75 million people in India – most of whom were already living on low incomes – were pushed into poverty, bringing the total of Indian poor to 134 million (9.7% of the population). That accounts for 60% of the increase in poverty around the world last year.

The pandemic changed everything: predictions at the beginning of 2020 suggested that the number of people living in poverty would continue to fall, as it had in previous years, going down to 59 million, or 4.3% of the population.

It’s easy to be overwhelmed by statistics. In human terms, “poverty” means having less than US $2, or ₹150, to live on every day. It means waking up every day wondering if your children will have to go hungry again. It means constant uncertainty: not knowing when you might be forced to find another place to live, not knowing if you’ll manage to find any work this week, not knowing when you’ll be able access to a power supply or clean water. It means living with a sense of powerlessness, knowing that you can’t afford to get your children the basics they need for school, that you don’t have any savings put by in case your parents need medical care - that however hard you work, there’s nothing you can do to improve your situation. It means seeing people pass you in the street as if you’re invisible.

Nearly 10% of the Indian population are living like this today – half of them pushed into such extreme circumstances as a direct result of the coronavirus pandemic. Millions who were just managing to get by are now destitute.

India's middle class has declined over the past year

At the same time, India’s middle class has shrunk. Before the pandemic, projections suggested that the middle class would continue its steady growth, reaching 99 million. Yet a year later, that number has fallen to 66 million, down by a third.

This mirrors trends across the globe. Overall, the number of people considered middle class – defined as living on between $10 and $20 per day – dropped by 54 million compared to projections from before the pandemic. Still, the majority of this decline – with 32 million people falling from the “middle class” bracket into “low income” – took place in India.

For decades, the middle class has been steadily growing. 2020 changed that. “The pandemic is estimated to have erased a year of growth, leaving the global middle-class population nearly unchanged from 2019 to 2020,” the report said.

No one is responsible for the pandemic. But national governments are responsible for their decisions on how to respond to it. Instead of keeping the rise in poverty to a minimum, the Indian government’s response to the situation has pushed tens of millions into desperate circumstances.

In January 2020, the World Bank forecast almost the same level of economic growth for India and China, at 5.8% and 5.9% respectively. But, after a year of a global pandemic, the new forecast is a contraction of 9.6% for India and growth of 2% for China.

Both countries have experienced significant setbacks, but in China the social and economic fallout of the coronavirus has been minimised. Fewer people have progressed to a middle-class income than might have been expected, and some have fallen into poverty. Economic growth is around 4% lower than expected, although it’s still growing. In India, it’s a very different story. Huge numbers of people have suffered a disastrous loss of income, and the economy is set to contract by nearly 10% after years of steady growth.

How China came out ahead

China was better prepared to deal with the pandemic

China has a larger middle class than India 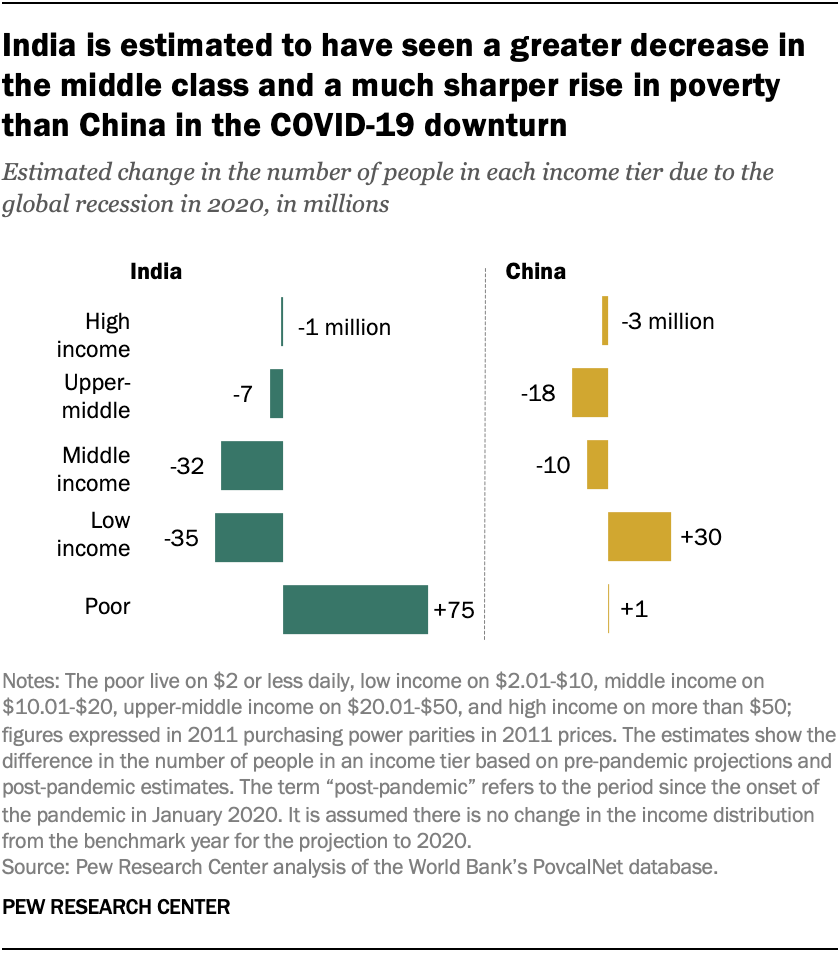 Both countries imposed strict lockdowns early on. So why did things go so differently? Partly because fewer people in China were on the brink of poverty; life became more difficult, but they were just able to absorb the economic blow of the lockdown. In India, however, it meant that millions of migrant workers were left stranded and without work, not knowing if they could survive. Those people had nothing to fall back on, either in terms of personal savings or state support.

In addition, China was able to harness national resources quickly into a coordinated effort to combat the spread of the virus. Public spending in previous years meant that there was already a good infrastructure of hospitals and health care services in place. In India, however, where government mechanisms work at a snail’s pace and health care is seriously under-funded, this was simply impossible.

The people’s trust in the authorities plays a part too. In China there is a higher level of trust in the government among the population, whereas in India it is taken for granted that it’s no use turning to politicians, public officials, or police officers for support. As a result, people were less likely to obey the rules and, as a result, it was harder to contain the virus.

Of course, in an emergency there is something to be said for a centralised authoritarian system like China’s. It’s easy to put India’s failures down to the increased complexity of a democratic system. But other democracies managed much better. Democracy was not the problem: the real issues were the underlying endemic poverty, the time it took to mobilise state resources, and the fact that Indians have learned that they cannot trust the government.

It’s worth remembering that, despite the impact of the pandemic, and despite all the disasters we read about in the news, humanity has been making steady progress for decades in improving living conditions for all. For the past 25 years, extreme poverty has been declining around the world, including India.

“The pandemic, by adding 131 million to the rank of the poor, has set the progress on poverty back by several years,” the Pew Research report said. That doesn’t mean that it will continue to decline. Hopefully, this is a temporary dip. It does mean that the Indian government should think carefully about what went wrong – and what needs to change.

on this page...
A smaller middle class An_Indian
Was it inevitable? An_Indian
How China came out ahead An_Indian
Reversing the decline An_Indian
options
share visibility
Related articles 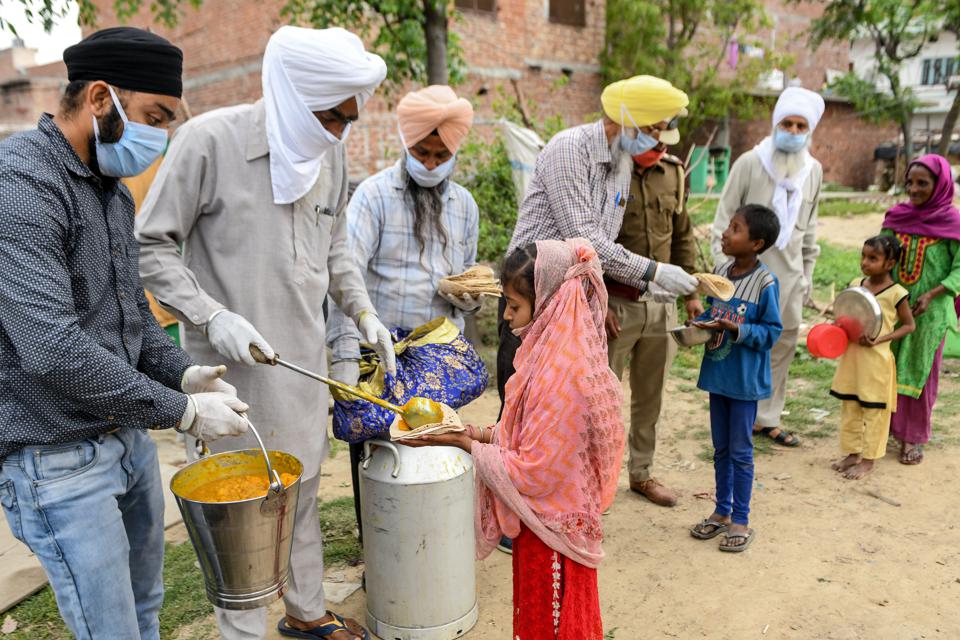