When India became independent in 1947, the state of Andhra Pradesh did not exist.

In the early years of independent India, state divisions were based on the old colonial administration system. The huge Madras State in the south included the area that is now Andhra Pradesh, as well as Telangana, Tamil Nadu, much of Karnataka, and the Malabar region of Kerala.

Andhra Pradesh – originally known as Andhra State – came into being in 1953, thanks to the dedication and personal sacrifice of one man: Potti Sreeramulu.

Sreeramulu believed so strongly in the importance of a state for the Telugu-speaking people that he gave his life for it, dying after a 56-day hunger strike to put pressure the national government. As a result, Prime Minister Jawaharlal Nehru agreed to the formation of a new state.

Nearly seventy years after his death, Sreeramulu is remembered as the force behind the creation of Andhra Pradesh, and honoured with the name of Amarajeevi (“immortal being”) in the region.

Who was Potti Sreeramulu?

A statue in memory of Sreeramulu 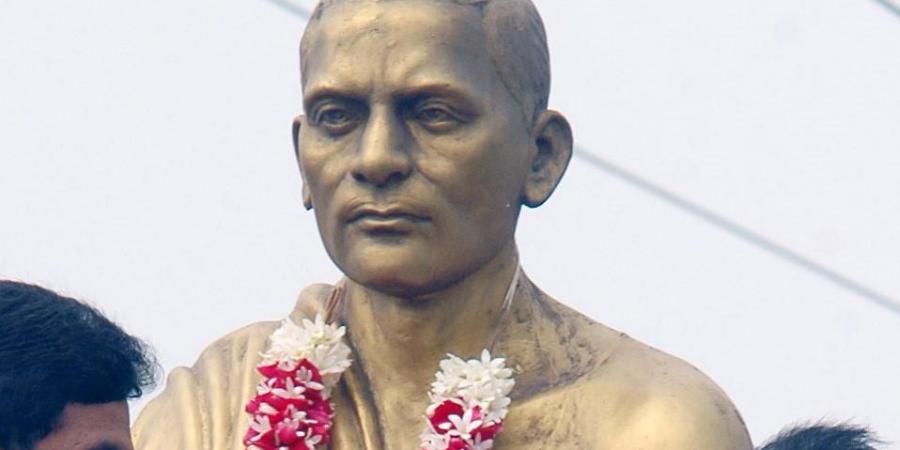 Potti Sreeramulu was born in 1901 in Padamatapalli, in what is now Andhra Pradesh, and attended secondary school in Madras (Chennai) before taking an engineering degree in Bombay, going on to work for the railways.

When Sreeramulu was 27 years old, with a promising career in engineering ahead of him, personal tragedy changed the course of his life.  He lost his family when his wife died in childbirth, and their newborn baby lived only a few days afterwards. Grief-stricken, Sreeramulu abandoned his ambition for worldly success, and plunged into the struggle for Indian independence.

He joined Mahatma Gandhi’s Sabarmati Ashram, and soon became one of Gandhi’s most devoted followers. In 1930 he was imprisoned after the Salt Satyagraha, and again in 1942 for his role in the Quit India movement. After his release, he returned to Andhra, campaigning for the adoption of charkha textile-spinning in Nellore in 1943 and joining the village reconstruction programme at Komaravolu, in the Krishna district.

Like Gandhi, he was a strong supporter of the Dalit community, and between 1946 and 1948 went on three long fasts in defence of their human rights, resulting in the Madras government passing legislation for Dalit upliftment. Seeing him walk the streets barefoot, carry placards advocating Dalit rights, many people thought him mad; many members of the upper castes, including his own Komati community, ostracised him completely.

Gandhi himself recognised Sreeramulu’s commitment, particularly his strength when it came to fasting. "If only I have eleven more followers like Sreeramulu, I will win freedom from British rule in a year," he said.

The struggle for Andhra State

Sreeramulu believed in the importance of a separate state for the Telugu-speaking people, and dedicated himself to this goal after independence.

The call for the creation of Andhra State had a longer history, and had first been raised in 1910. The Telugu people felt that the Madras State did not adequately represent their interests, and groups had demanded a state based along linguistic lines.

Yet it was Potti Sreeramulu’s determination that finally made it happen. He began a long fast, ending only when Jawaharlal Nehru agreed to his demand that Rayalaseema and Coastal Andhra should become a separate state. Little progress followed, however, as the government could not accept that the city of Madras should become the capital of the new Telugu state.

Sreeramulu went on another hunger strike, winning considerable public attention for the cause. There were demonstrations throughout the regions, which exploded into riots when people heard of Sreeramulu’s death as a result of his fast on 15th December 1952. He had taken no food for nearly two months.

As a result of the strength of public feeling surrounded Sreeramulu’s death, Jawaharlal Nehru finally agreed to the creation of Andhra State in 1953, with its capital in Kurnool.

The creation of Andhra Pradesh

Three years later, in 1956, Andhra State became Andhra Pradesh, with Neelam Sanjiva Reddy elected as the first Chief Minister; he later went on to become the sixth President of India.

Potti Sreeramulu’s campaigning and death had made the creation of Andhra Pradesh possible; the government’s decision to reorganise all Indian states along linguistic lines with the States Reorganisation Act of 1956 was part of his legacy.

The linguistic borders drawn on the map meant that the Telangana region, previously part of Hyderabad state, was incorporated into the new Andhra Pradesh. The city of Hyderabad became the state capital.

There was always some difference between the regions, despite the shared language: with the exception of the thriving urban centre of Hyderabad, Telangana – like Rayalaseema in Andhra – was economically and educationally less advanced than the coastal Andhra areas. As a result, regional committees for Telangana and Rayalaseema were created to ensure that the interests of both were protected. Telangana continued to fall behind the coastal areas in terms of development, however, and this became one of the main motivations for the separatist movement that began in the late 1960s, with campaigners demanding an independent state of Telangana.