The Congress Party crushed the Jai Andhra and Jai Telangana separatist movements in 1973, but a lasting union was impossible.

The 1956 creation of Andhra Pradesh was based on the premise of state division along linguistic lines, making a state for all Telugu-speaking people. Yet there was always a sense of disunity between Andhra and Telangana, despite the shared language.

Culturally and historically, these two regions were dissimilar: Telangana had been part of the feudal state of the Nizam of Hyderabad, while Andhra was part of the colonial Madras Presidency. The everyday lives of the people in the two states during the first half of the twentieth century had been very different. The State Reorganisation Commission was well aware that a union could be problematic, as most of Telangana was less developed than coastal Andhra. In their final analysis, they advised against unification:

"After taking all these factors into consideration we have come to the conclusions that it will be in the interests of Andhra as well as Telangana, if for the present, the Telangana area is to constitute into a separate State, which may be known as the Hyderabad State with provision for its unification with Andhra after the general elections likely to be held in or about 1961.”

Despite this recommendation, the government decided to go ahead with the unification of Andhra and Telangana into the state of Andhra Pradesh in 1956, with the provision of a “Gentleman’s Agreement” to safeguard Telangana against potential marginalisation and ensure that its people were equally represented.

Discontent on both sides

The unification of Andhra and Telangana resulted in an uneasy marriage, leading to calls for separation from both sides with the emergence of the Jai Telangana and Jai Andhra movements from the late 1960s.

Of the three states that made up Andhra Pradesh – Telangana, Andhra, and Rayalaseema – Telangana was the largest, covering over 40% of the total territory. Some people of Telangana sensed injustice in the division of revenue and resources, for example in the distribution of water for irrigation and the education budget. According to them, the “Gentleman’s Agreement” had been violated, and the Telangana region was being exploited in favour of Andhra.

At the same time, there was growing dissatisfaction in Andhra as Hyderabad raced ahead in development, with most of the state’s economy focused on the capital city while coastal areas were neglected.

One of the main issues of contention was the legislation known as “Mulki rules”. When Hyderabad state became part of India in 1948, the Mulki rules were established between the Indian government and the Nizam Nawab, the last of the ruling dynasty of Hyderabad. These rules stated that anyone who had lived in Hyderabad for 15 years or more was considered “local”, and therefore eligible for government positions.

This meant that many people from Andhra felt disenfranchised, as they were effectively disqualified from a large number of official roles in their own state capital. Yet as more people from coastal Andhra and Rayalaseema moved to Hyderabad and established themselves there, after 15 years they became “mulki” – and, as a result, the people of Telangana felt that outsiders were taking over.

Both sides felt that they were being unjustly treated, and that a separation of the state was the only way forward; at the end of the 1960s, the resentment broke out in violent protests and the establishment of formal independence movements. 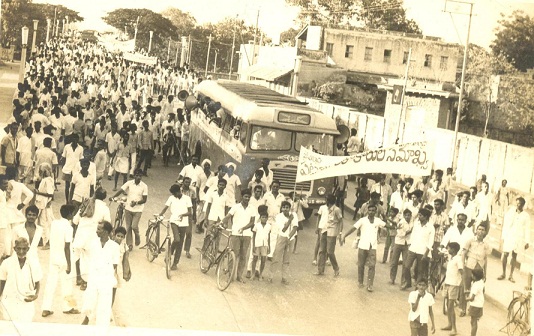 The result of this brewing sense of inequality was the Jai Telangana movement, beginning with demonstrations in 1969 and leading to the formation of Telengana Praja Samithi (TPS), the Telangana People’s Commission, a political party demanding the independence of Telangana.

A widespread strike in Hyderabad in June 1969 led to outbreaks of violence between TPS supporters and those in favour of the union, in which over 350 people died.

There was equal dissatisfaction among many people from Andhra; for many, the Mulki rules meant that they were “treated like aliens in their own land.” A student movement to restore the old Andhra State emerged in 1972, under the name Jai Andhra, and prominent political figures such as Tenneti Viswanadham and Gouthu Latchanna - both of whom had played key roles in India’s struggle for independence – became its leaders. During a protest strike at the end of 1972, eight people were killed in police fire.

Suppression of the separation movements

Both Jai Andhra and Jai Telangana were suppressed by political moves from the Congress government. The ruling party held the view that Andhra Pradesh should remain united – regardless of the feelings of many people on both sides.

Marri Channa Reddy, the leader of Jai Telangana and the TPS, effectively ended the Telangana independence movement by merging his party with Congress and becoming one of the main figures responsible for the Six Point Formula of 1973, a political settlement to resolve the dispute between Andhra and Telangana. Many in his former party considered it a betrayal. Indira Gandhi, who was Prime Minister at the time, made him Governor of Uttar Pradesh the following year.

P.V. Narasimha Rao – who later rose to become Prime Minister in the early 90s – resigned as Chief Minister of Andhra Pradesh in 1973, after the Jai Andhra movement had flared up. His predecessor, Brahmananda Reddy, had also been pressured into resigning by Congress leaders; neither had succeeded in enforcing unity in the state.

Instead, President’s Rule was brought in to keep the situation in check for the remaining months of 1973, until the Six Point Formula was finalised.

Congress succeeded in repressing the separatist movements, but the feelings of dissatisfaction remained. After 1997, when the BJP passed a resolution seeking a separate Telangana, it became a matter of public debate, culminating in the bifurcation of the state in 2014 – just over 40 years after the government had enforced unity.