For now, the Indian government has just asked the states to focus on “stringent containment and public health measures”, including testing, tracing and inoculations.

India is witnessing a sharp spike in COVID-19 cases after months of declining numbers had given the country hope it had made it through the worst of the pandemic relatively unscathed.

As the health crisis escalates, the poor are once again fearing a return to lockdown and economic hardship. Migrants have started fleeing from cities to their home villages in order to avoid the pain and trauma they went through a year ago when Prime Minister Narendra Modi enacted a nationwide lockdown. Many cities, including Mumbai and Delhi, have already announced nightly curfews.

For now, the Indian government has just asked the states to focus on “stringent containment and public health measures”, including testing, tracing and inoculations. Modi has also appealed to people to get vaccinated during a four-day “Tika Utsav” (special vaccination drive), which began on Sunday.

However, the situation remains grim. Even though India is one of the world’s biggest coronavirus vaccine manufacturers, some states are experiencing vaccine shortages. At the same time, experts fear a lack of social distancing and new variants of the virus are causing infections to potentially spiral out of control.

How the poor suffered during last year’s lockdown

Migrant workers wait for trains in Mumbai after the state of Maharashtra announced new restrictions this month, including weekend lockdowns. DIVYAKANT SOLANKI/EPA 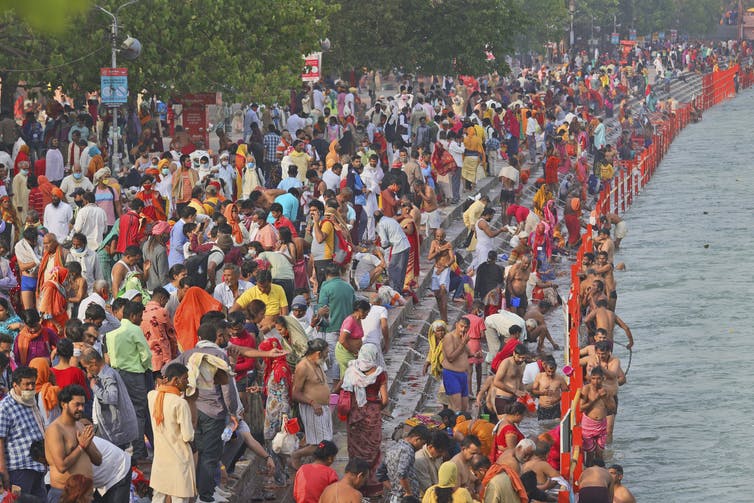 When COVID-19 first appeared in India last year, the Modi government was quick to bring the country together.

In a speech to the nation last March, he announced a 21-day nationwide lockdown of 1.3 billion people with only four hours’ notice. All means of transportation were suspended. The rich and affluent started hoarding food and medicines, while the poor worried about their livelihoods.

A mass migration ensued as hundreds of millions of migrant workers headed from the major cities back to their home villages on foot. This was the most visible face of the humanitarian crisis. Others, however, suffered out of the public eye, such as the street vendors, waste pickers, domestic maids and shopkeepers in slums, who were all forced to stop working.

Migrant laborers wait for buses to transport them to their hometowns following last year’s lockdown. AP

As part of a study last year, I helped conduct a series of six rounds of telephone surveys in 20 diverse slums in the city of Patna, the capital of the northeastern Bihar state from July to November.

Nearly all slum residents we spoke with — except the rare few with protected formal sector jobs — were cut off suddenly from their sources of income after the lockdown was announced. And more than 80% of slum households in Patna lost their entire primary source of income.

Economic recovery since the lockdown has also been slow. By mid-November, one-third of respondents had still not fully recovered their pre-pandemic incomes. Many had been hired back at their old jobs on a part-time basis or at a fraction of their former pay. Many jobs simply disappeared.

The poor survived by cutting back on their food, borrowing money and helping each other.

Given these struggles, there is now a sense of anxiety in these slum communities and a mistrust of the government, especially Modi. Says Ajay, 35, a street vendor who lives in the Kankarbagh slum,

The government finds it is easy to lock us down but not to provide financial and livelihood support. PM is busy campaigning for an election where thousands of people come without masks and are violating social distancing norms.

Undoubtedly, Modi still remains popular among most ordinary people. When he says something, India listens carefully. It worked well last year, and his appeal compelled people to wear masks and maintain social distancing, helping to flatten the curve and limit the loss of lives.

However, making public speeches will not be enough during this second wave. The prime minister needs to be seen adhering to these practices in his own daily life, but this is not happening on the ground.

In the ongoing elections in West Bengal, Assam, Kerala and Tamil Nadu, as well as the election in Bihar last year, Modi and other party leaders have addressed several rallies without paying much attention to COVID restrictions. Modi himself has addressed more than 20 rallies attended by thousands of unmasked people.

When leaders are seen addressing mass gathering without masks and social distancing, the public will not only assume everything is normal, they will lose their fear of COVID.

Modi has also insisted he would not politicise the pandemic, but he has done exactly that. In states like Maharashtra, Punjab and Chhattisgarh, which are facing a spike in cases, Modi’s party is pointing the finger at the state leaders, who come from opposing parties. The states, meanwhile, are blaming Modi’s government for failed leadership.

Another concern is the Modi government’s decision to allow a major festival, Kumbh Mela, to take place in Uttrakhand state, which is ruled by his party, the BJP. Several million people gathered at the Ganges River for an auspicious bathing day this week, flouting social distancing practices.

Uttrakhand’s chief minister said the “faith of devotees will overcome the fear of COVID-19”, at a time when infections are skyrocketing.

Who will help the poor?

As the numbers of COVID-19 cases are rising every day, the fear of a return to lockdown is ever-present, haunting the poor. Many have yet to recover from their previous debts, and COVID-19 is now threatening their livelihoods again.

Last year, several not-for-profit, grassroots organisations came forward to help the migrants and urban poor dwellers, but this is going to be more challenging this year.

Not only have their funds been depleted, but recent changes brought by the government have stopped the flow of foreign aid money to many organisations. Amnesty International announced in September it would halt its operations in India after its bank accounts had been frozen.

One NGO volunteer, Prabhakar, who works with slum dwellers in Patna, told us,

if the government is going to announce the complete lockdown like last year, many people will run out of food, as parent NGOs have stopped sponsoring the small organisations which work with the slum dwellers.

This is the time for Modi to show decisive leadership in not only controlling the surge of the virus, but also providing financial assistance to millions of urban poor and helping them reach their home villages with their dignity intact. This is what is needed to instill trust in the prime minister again.

Binod Kumar, a senior project officer in the Entrepreneurship Development Institute of India, contributed to this article.