In 2019, Y.S. Jagan Mohan Reddy – the leader of the YSR Congress Party – was elected Chief Minister of Andhra Pradesh.

Many thought it impossible until it happened. Jagan Mohan Reddy had spent 16 months in jail from 2012 to 2013 after being found guilty in a disproportionate assets case, before being released on bail. In 2019, many of the charges against him were still pending. Given their serious nature, how could he even be considered for political office?

It could have been very different. Only two years before his election to state leadership, in 2017 the Central Bureau of Investigation (CBI) moved to cancel his bail. If they had succeeded, he would have been in jail during the 2019 elections – not out campaigning.

A history of embezzlement charges

Y.S. Jagan Mohan Reddy was born into a privileged political family; his father had also served as Chief Minister of Andhra Pradesh. He was first elected as an MLA for the Indian Congress Party (INC) in 2009, at the age of 37. This coincided with the sudden death of his father, which put Jagan in the spotlight and fuelled expectations that he would step up to a leading political role. His career rested entirely on his family connections – not his own personal merits.

Yet despite his father’s long-standing commitment to the INC, in less than a year Jagan had a serious falling out with Congress leadership, and started his own party: the YSR Congress. He won a huge number of votes at the first local elections, but before long his luck ran out. In 2012, just as the new YSR Congress Party was getting up and running, he was arrested by the CBI in a disproportionate assets case.

There are extensive charges against Jagan Mohan Reddy, covered in eleven CBI charge sheets. In essence, they boil down to corruption, embezzlement misappropriation of public funds, forgery, cheating, and breach of trust by a public servant. It appears that Jagan’s father, while Chief Minister, had used his office to put pressure on firms to invest in his son’s business empire, ensuring that the family wealth increased and Jagan became one of the richest politicians in India’s history.

Jagan himself engaged in quid pro quo deals with investors, allowing them special privileges – such as exemptions from standard procedures surrounding real estate ventures, mining, and other businesses – in return for money. In other words, he misused his political power and accepted bribes in return for favours. 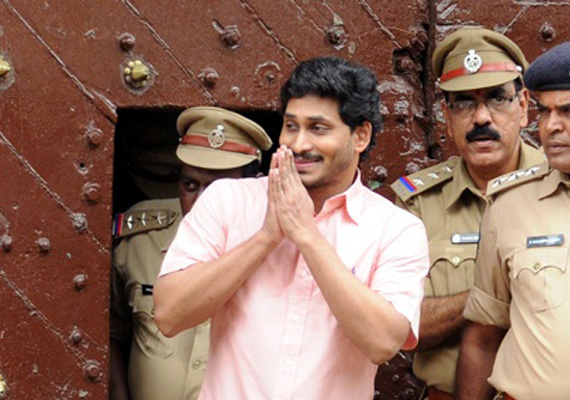 There was enough evidence for the CBI to quash all of Jagan’s early appeals for bail, on the grounds that he might influence key witnesses if released. Sixteen months later, however, in September 2013, Jagan walked free. The charges against him still stood, and he had not been brought to trial.

Eight years later, nothing has changed – except that now Jagan Mohan Reddy is Chief Minister of Andhra Pradesh. He is still on bail, and has not been tried for the numerous charges against him.

The timing of his release was fortunate for him, coinciding with the official decision to bifurcate the state of Andhra Pradesh to create an independent Telangana. Jagan was strongly against bifurcation – even fasting in protest while in jail – and took advantage of the “United Andhra” sentiment, and the resentment against both the INC and the Telugu Desam Party (TDP). It won him the votes he needed; he became leader of the opposition from 2014 to 2019, while Chandrababu Naidu, of the TDP, was Chief Minister.

Jagan has had several close calls with the CBI. In 2017 they attempted to revoke his bail on the grounds that he had flouted bail conditions by trying to dissuade witnesses from testifying against him.

And the eleven charge sheets with the CBI is not the only problem for Jagan, who also faces six charge sheets filed by the Enforcement Directive (ED). All these are related to quid pro quo cases and money laundering.

Yet the ponderous workings of the Indian justice system mean that these cases – concerning crimes allegedly committed a decade ago – are still awaiting resolution, although the legal machinery is slowly moving forward.

Of course, Jagan has done everything he can to slow it down even further, and has attempted to use his political power to avoid facing trial: shortly after his election as Chief Minister, he filed for exemption from personal appearances at court on the grounds that he would be busy with official duties. The court refused to grant the exemption, however, and he finally faced trial in February 2020. A year later, in January 2021, he was ordered to appear before the courts again.

The court hearings are still ongoing – yet there is a chance that they will be resolved in the near future. At the same time, members of Jagan’s own party are becoming increasingly disillusioned with their leader: one YSR Congress MP, Kanumuri Raghu Ramakrishnam Raju, has filed a petition with the CBI accusing Jagan of flouting bail conditions and requesting that his bail be repealed.

After less than two years as Chief Minister, Jagan’s legacy is already catastrophic for Andhra Pradesh.

He has changed the previous administration’s plan for a new state capital in Amaravati, leading to mass protests and the withdrawal of millions of dollars of investment.

He has ridiculed one of the highest judges in the country, bringing the entire justice system into question.

And he has bought votes, giving away freebies during the election campaign in exchange for support, an action that calls democracy itself into question.

He has done all this while still, officially, on bail. The CBI and ED cases against him still stand. If the trial continues, and a verdict is finally reached, there is a high chance that he will be found guilty. Then, perhaps, this chaotic saga of corruption will come to an end.