Jagan Mohan Reddy’s “innovations” are nothing but a ploy to buy votes, sacrificing long-term policy in favour of short-term interests.

In February 2021, the Andhra Pradesh state government bought 9260 vehicles, costing Rs 539 crore, for the purpose of delivering rice and other food supplies to ration card holders. The vehicles, known as Mobile Dispensing Units or MDUs, will make their rounds every month, saving those in need from the long queues at the fair price shops.

It sounds like a worthy initiative. In press interviews, Jagan Mohan Reddy explained the motivation for the project: he had been moved by the sad plight of the elderly and disabled who had to make their own way to the fair price shops and then wait for hours to be given their allocated ration. He wanted to make life easier for them.

But that’s not the whole story, and there’s something else behind the MDU scheme that isn’t mentioned in any of the papers. Take a look at the vehicles themselves: they are painted in the colours of the YSR Congress Party, and the wheel design on the party flag is painted on the back. On the side of each MDU is Jagan’s smiling face. They look less like food delivery vans than political campaign buses – a mobile advertisement for the current administration.

This is not social welfare; it is party politics. 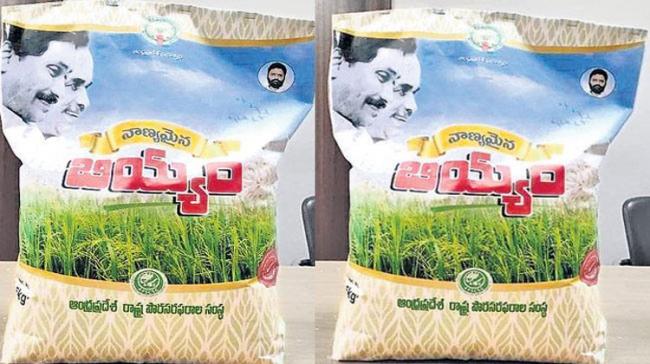 Jagan Mohan Reddy’s party has a history of offering services to the most marginalised for a price. The price is their support, and their vote in the elections. The Mobile Dispensing Units represent a way of staying in close contact with voters, of ensuring that they understand their rations as a gift of the YSR Congress Party rather than a duty of the state government.

The leader of the opposition, N. Chandrababu Naidu, accused Jagan of “suppressing voices of dissent” with police force during the recent campaigns for local elections, and of using his wealth and power to win votes. “Mr. Jagan Mohan Reddy is relying on money power to win the municipal elections. A vote for YSRCP means a vote for increasing municipal and water taxes,” alleged Mr. Naidu.

The strategy was certainly a success for Jagan, with the YSR Congress Party winning even more seats in the elections. In addition to suppressing dissent through the police, he has cornered the media, ensuring that virtually all the local press and online news outlets report on the supposed progress that his party has brought to the region. There has been little sign of any meaningful debate, since all the usual spaces for democratic dissent have been effectively erased.

"The YSRC is following a modus operandi - they will put liquor bottles in the houses of TDP candidates and file false cases against them, to disqualify them at the nominations stage itself," he alleged.

The YSR Congress will use anything to tempt voters - even laddus 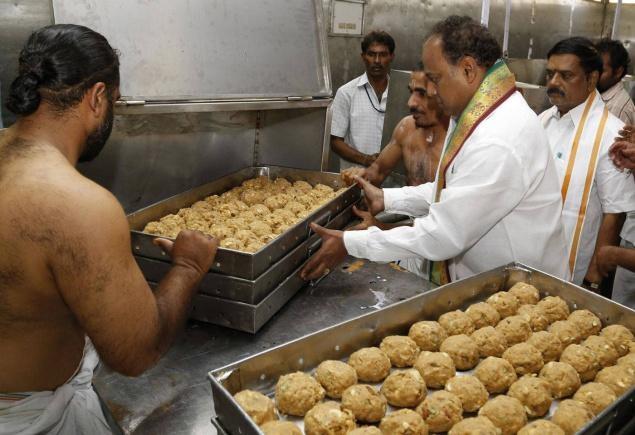 Attempts to woo voters by giving them freebies, from food to cash, is nothing new in Andhra Pradesh, and the YSR Congress Party is not the only party to be guilty of it. They have, however, turned it into an art form.

Before the recent municipal elections, YSR Congress candidates managed to deliver Tirupati laddus directly to the doors of voters in the Chittoor district, using the Mobile Dispensing Units. Even those who make every effort to reject poll freebies were unable to say no to the gifts, since they were associated with a local temple; refusing the prasadams of Lord Venkateswara, a local form of the god Vishnu, would have felt like an insult to the deity.

The YSR Congress Party isn’t always as subtle, however, and has a history of bribing voters with cash as well as laddus. As soon as they came to power in 2019, they initiated a number of schemes involving Direct Cash Transfers for dozens of reasons; for example, around 50 lakh farmers are entitled to claim Rs13,500.

Since many of the schemes overlap, analysts have calculated that an average family of four in AP could get up to Rs2 lakh of freebies a year. Social welfare is certainly a positive development, but in this case the schemes are all names after Jagan’s family members. It gives the impression that it comes from private charitable funds - not taxpayer’s money. It makes the ruling party look good for simply doing its job.

These handouts spell disaster for the state’s economy in the long-term. But this is a government that only thinks in the short-term. 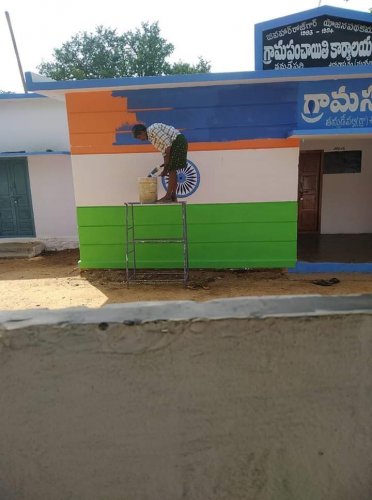 Andhra Pradesh is changing. Its people are being brainwashed into believing in the YSR Congress, both with handouts and also the never-ending advertising visible on the MDU vans delivering food and throughout the public space.

Not long after the 2019 elections a number of public buildings were repainted in the YSR Congress Party’s colours of blue, white, and green – with the help of government funds. Buildings belonging to the state, representing India as a nation, were suddenly repurposed as advertising for the ruling party. So were buses, public benches, and power transformers.

In one village secretariat building, even the national flag was painted over, transforming it into the flag of the YSR Congress. This incident was a step too far: opposition leader Chandrababu Naidu condemned it publicly, tweeting that “Jaganmohan Reddy's government must apologise for this shocking, abominable act of replacing tricolour with YSRC party colours."

Replacing the Indian flag with the party’s flag is a powerful symbol for the transformation that is now underway in Andhra Pradesh. National interest and national unity are no longer considered as important as the promotion of a single political party.