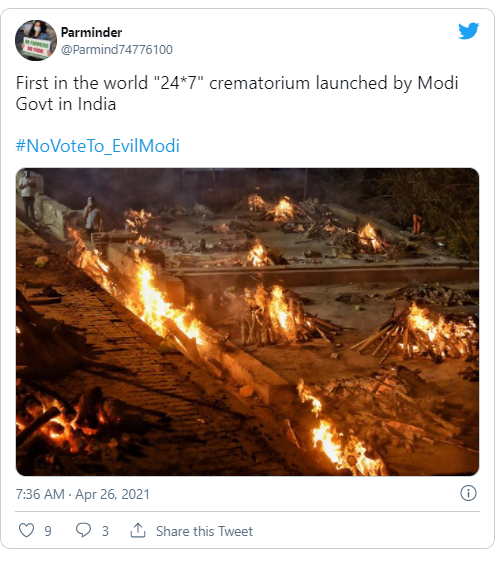 As COVID-19 ravages India, Prime Minister Narendra Modi’s government is becoming increasingly draconian in its crackdown on social media, particularly when it comes to any criticism of its response.

Cries of help and outbursts of anger have been spilling out on Facebook, Twitter and other platforms since the second wave began to worsen in recent weeks. Indians are using hashtags such as #ModiMadeDisaster and #ModiFailsIndia to place the blame directly on the government — and Modi himself — as the human tragedy unfolds.

In one Twitter post, for instance, a photo of burning pyres is accompanied by the tagline, “First in the world ‘24/7’ crematorium launched by Modi Govt in India”.

Another hashtag, #ResignModi, was spreading across Facebook this week before posts containing it mysteriously disappeared for several hours. Facebook told BuzzFeed News the posts were temporarily hidden by “mistake” and not because the Indian government asked the company to do it.

But the government has been taking a harder line on any social media content it finds objectionable, with the purported aim of preventing the spread of misinformation and sparking panic. Opponents are concerned its true objective is to stifle criticism and dissent.

Last week, the Ministry of Electronics and Information Technology issued an edict to Twitter, Facebook and other platforms to remove some 100 posts the government claimed were spreading misinformation and creating panic.

The request was made under section 69A of the Information Technology Act, an amendment passed in 2008 that gives the government the power to direct social media companies to block content in the interest of the sovereignty, integrity and defence of India.

Various news media reports said over 50 tweets were subsequently censored on Twitter from a variety of sources — including opposition politicians and journalists. Twitter said it had done so after receiving a “valid legal request”.

But media reports say some of the censored content merely criticised the government for its handling of the pandemic or showed images of patients being treated in cramped hospitals or makeshift tents.

The government has denied it is sensitive to criticism. But this is not the first time the government — and Twitter, for that matter — has come under fire for removing or blocking users’ content.

In February, the Ministry of Electronics and Information Technology ordered the blocking of hundreds of Twitter accounts that supported the ongoing farmer protests across the country. The government claimed the accounts were spreading misinformation and provocative content with the hashtag #farmergenocide.

However, following public outrage, the accounts were restored by Twitter. A subsequent demand to block over 1,000 accounts was only partially fulfilled by Twitter after the government issued a notice of noncompliance.

Meanwhile, the Indian government continues to be the biggest instigator of internet shutdowns in the world, according to the digital rights group Access Now. Last year, Indian governments shut down the internet at least 109 times, violating citizens’ rights to information and expression.

The singer Rihanna gave the issue international attention after the government shut down the internet in parts of New Delhi in February.

India’s Supreme Court is currently considering a petition filed by a member of the ruling BJP party seeking greater regulation of content on social media platforms.

Another concern is the government’s new regulations for all digital media and streaming platforms in the name of controlling fake news, which critics say would allow it to “censor news media at their pleasure”.

Opponents point to the lack of legislative backing and parliamentary scrutiny for the regulation. They argue it could be used to target major online news media players such as The Wire, Scroll.in, Newsclick, The News Minute and other outlets for their criticism of the government.

Numerous media, civil society and digital rights groups have expressed alarm over these attempts to increase government control over social media platforms. Said one group in an urgent warning after the blocking of Twitter accounts in February:

Such actions are harmful not only for operational transparency but also for India’s democratic ethos. […] The secrecy and lack of a clear process with respect to the blocking of the accounts is especially concerning if directions have indeed been made under Section 69A of the Information Technology Act, 2000.

From news reports no show cause notice or opportunity to present a defence has been provided to the users of these accounts. Indeed, Twitter did not even notify most of these accounts about their access being withheld.

Modi and his Bharatiya Janata Party swept into power in 2014 on the back of the first-ever social media election in India. Modi himself has since become one of the top three most followed political leaders in the world on social media. His every movement, policy announcement and campaign is multicast on numerous platforms.

His party extended its lead in the 2019 election by using data collected from conversations on messaging apps such as WhatsApp and Modi’s eponymous “NaMo” app.

Now, however, Modi’s party is seen as increasingly intolerant of public criticism online. And counter to its own claims of rampant misinformation in the country, his BJP party has been accused of distributing false and misleading information on these platforms itself.

Modi is known for his ability to speak to the masses, while BJP President Amit Shah is known for his organisational abilities. The combination has won election after election for their party. It is time for both these leaders to speak candidly with their citizens about the COVID crisis and not attempt to silent critics and dodge accountability for their actions through censorship.