The horrific situation in India’s hospitals shows the extent of the authorities’ failure.

In a devastating article in the Guardian, Arundhati Roy writes of the way the government-controlled media in India are covering the current crisis. On every channel, news presenters speak of the virus “overwhelming the healthcare system.” It makes it sound like a tsunami, an unstoppable force of nature for which no one could be held responsible.

But, as Roy points out: “The system has not collapsed. “The system” barely existed.”

The tragedy that is currently unfolding cannot be blamed on bad luck. It was preventable. It is happening because the current government, and the Congress government that preceded it, have let India’s healthcare infrastructure crumble into a state of total disrepair.

What we are witnessing now is the direct result of the political decision to prioritise economic growth over people’s health.

Healthcare is not a government priority

India currently ranks 145 out of 180 countries on quality of and access to healthcare, and 179 of 189 countries in prioritisation of health in government budgets. For the country with the second largest population in the world, this is a shocking statistic. It means that India’s 1.3 billion people lack access to the kind of healthcare that is considered standard in much poorer countries, and that treatment is only for the privileged few who can afford it.

And that’s based on the government’s official figure that 1.25% of GDP is spent on healthcare. In reality, much of that allowance is allocated for sanitation, water, and nutrition – essential for health, certainly, but not usually counted as “healthcare”. That leaves only 0.34% of the GDP on actual health spending, when the 2021 Economic Survey recommends that this should be at least 3%.

If just 3% of India’s GDP were allocated to the health budget, it would be enough to halve the out-of-pocket health expenses people face, which can be impossible to meet for middle-class Indians as well as the poor.

The price of privatisation

Hospitals are running out of oxygen to treat COVID-19 patients 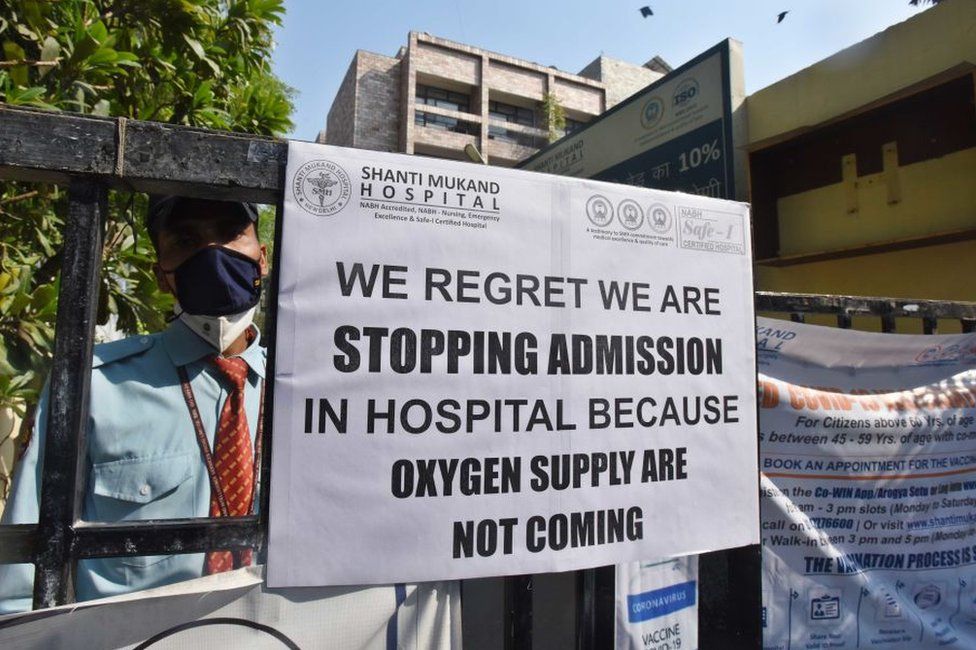 The heart of the problem is privatisation. Over 78% of healthcare in cities and 71% in rural areas is now part of the private sector. If you don’t have the money to pay, you won’t get treatment. You won’t even get to see a doctor.

A public healthcare system still exists, but it has been degraded almost beyond repair. If you’re lucky, you can still find a government hospital – but you still have to pay, because this is India. Unless you have the right contacts, or enough to bribe the person in charge, you might have to wait months for the first appointment.

The COVID-19 pandemic has exposed how this “system” really works. People are being forced to pay to get basic treatment for their loved ones: forty-year-old Prashant Mehra said he had to pay a broker before he could get his 90-year-old grandfather admitted to an overcrowded government hospital. Even then, his grandfather died several hours later. There are reports of others, who lack the resources to pay for preferential treatment, dying outside hospitals while still waiting to be admitted. Some desperately bribe the mortuary attendants for a final look at a deceased family member.

Supplies of essential drugs and oxygen are running low throughout the country. Again, the only way to get hold of them is to pay. A BBC report tells the story of Anshu Priya, who was unable to find a hospital bed for her sick father-in-law. In the end, she was forced to spend Rs 50,000 for an oxygen cylinder that would normally cost Rs 6,000. By that time her mother-in-law had also caught the virus, and Anshu had used up the last of her savings.

When even major hospitals in the capital come close to running out of oxygen, it’s unsurprising that people become desperate and turn to social media in the hope of locating a precious cylinder that could save a loved one’s life. And it’s not just the poor, it’s everyone – professionals, lawyers, even politicians.

The government could have prepared for this. They could have ensured that every hospital was fully prepared in case of a second wave. Instead, they chose complacency.

Once again, migrant workers are leaving the cities and returning to rural areas 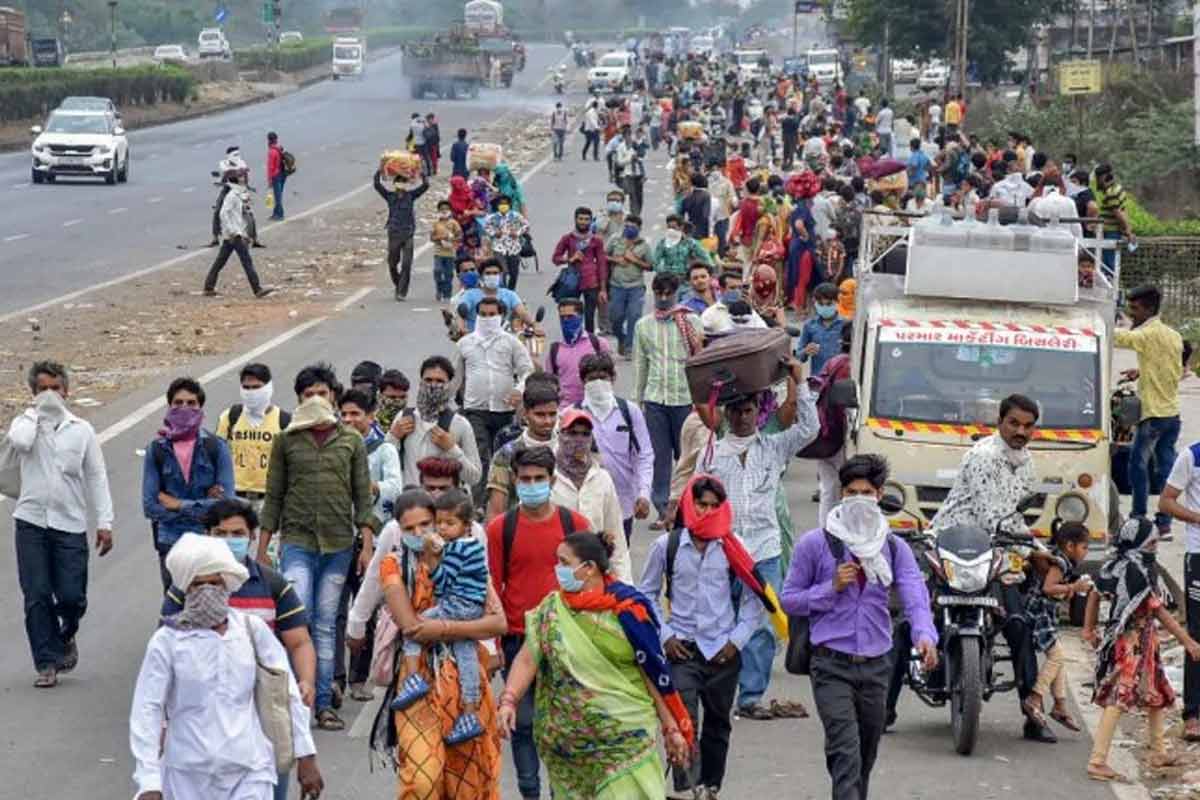 Hospitals in Delhi are desperate. Outside the capital, the situation is even worse. Migrant workers in cities are flooding home to their villages in scenes reminiscent of March 2020, when the first lockdown was announced. They have no choice. But once again, they are bringing the virus with them.

This time, there are no quarantine centres prepared for them in their villages. And the deaths go unrecorded, as facilities for testing have dried up. Take the case of Dhanraj Singh, a forty-year-old blind man, who made it to the Sikanderpur community health centre in eastern Uttar Pradesh. He was breathless, and needed urgent help. But there was nothing the doctors could do; they had no oxygen supplies left. Less than ten minutes later, Singh was dead. He had all the symptoms of COVID19, yet the cause of his death will remain “unconfirmed.”

Nevertheless, the Chief Minister of Uttar Pradesh, Yogi Adityanath, continues to make public statements that all hospitals in the state – both private and public – still have sufficient oxygen supplies. He has even threatened to arrest anyone who suggests otherwise under the National Security Act for “spreading rumours” and “spoiling the atmosphere.”

Anyone witnessing the situation in Uttar Pradesh today can confirm that this is a lie. Yet the government still seems to believe that the extent of this emergency can be covered up.

Young people are dying for lack of oxygen – and still the authorities respond with lies and denial. Manoj Kushwaha, 35 years old, was another victim of the broken healthcare system. He was admitted to the Kushinagar district hospital, also in Uttar Pradesh, on 18 April, where he was given an injection but no oxygen. His family moved him to a private hospital, where he was given oxygen for four days – until it ran out. “We were told to arrange our own cylinder,” says his brother. Manoj Kushawa died on 25 April, because there was no more oxygen to keep him alive.

The authorities have failed

This was not inevitable. Tens of thousands of lives could have been saved. The catastrophe that is now unfolding is the result of over a decade of cuts to healthcare spending, and to the government’s complacency over the winter months when the spread of the virus appeared to be subsiding.

Narendra Modi is responsible for these deaths. For using the last few months for self-promotion, boasting that India had beaten COVID-19, rather than preparing for a second wave.

"We have been telling authorities that we are willing to increase our capacity, but we need financial aid for that," said Rajabhau Shinde, who runs a small oxygen plant in Maharashtra. "This should not have happened.

As the saying goes, dig the well before you're thirsty. But we didn't do that."