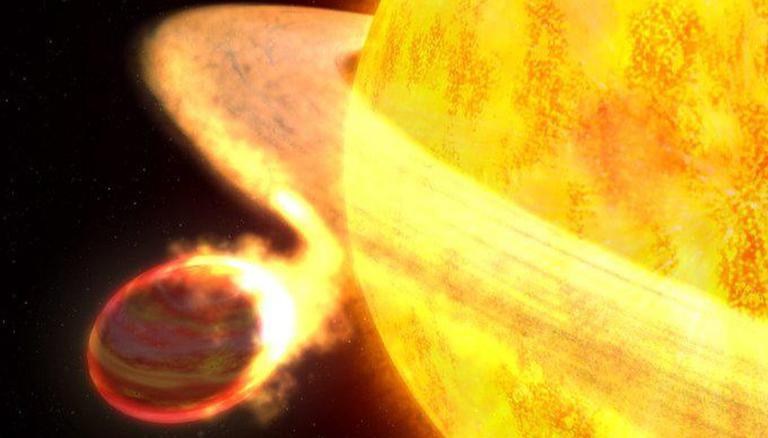 Astronomers have stumbled upon hundreds of Jupiter-like planets and each of them has astonishing features. Although each one of them is a gas giant, some have sizes similar to Earth while some outsize even the largest planet of our solar system. This time, scientists have discovered an ultra-hot gaseous giant which is the most extreme among 400 hot Jupiters found to date. Named TOI-2109b, this exoplanet is five times the size of Jupiter and completes one orbit around its star in just 16 hours.With such a short orbit, the planet has been identified to have the shortest orbit of any gas giant ever known and has also been designated as the second hottest planet ever.

Owing to its proximity to its star, the temperature on the planet during the day reaches over 3,300 degrees celsius. Initially discovered by NASA's Transiting Exoplanet Survey Satellite (TESS), the planet is in the process of orbital decay and will eventually fall into its star, however, that won't happen for a few more million years,as per the experts.Since its orbit is extremely small, scientists are exploiting the opportunity to study what happens to a planet in its final stages afterit starts getting pulled towards its star.Ian Wong, who led the discovery and is a scientistat the NASA Goddard Space Flight Center said as per Phys.Org,In one or two years, if we are lucky, we may be able to detect how the planet moves closer to its star.In our lifetime we will not see the planet fall into its star. But give it another 10 million years, and this planet might not be there.The planet, located 855 light-years from Earth,was first tracked in May 2020 and just over a month after its discovery, astronomers found that there were dips in the light emitted by the planet at fixed periods that hinted at itstight orbit. Further observations and analysis of the data confirmed thatTOI-2109b indeed took just 16 hours for one revolution.Phys.Orgreported MIT researcher Avi Shporer saying, "Everything was consistent with it being a planet, and we realized we had something very interesting and relatively rare".Image: Twitter/@Astro_journey