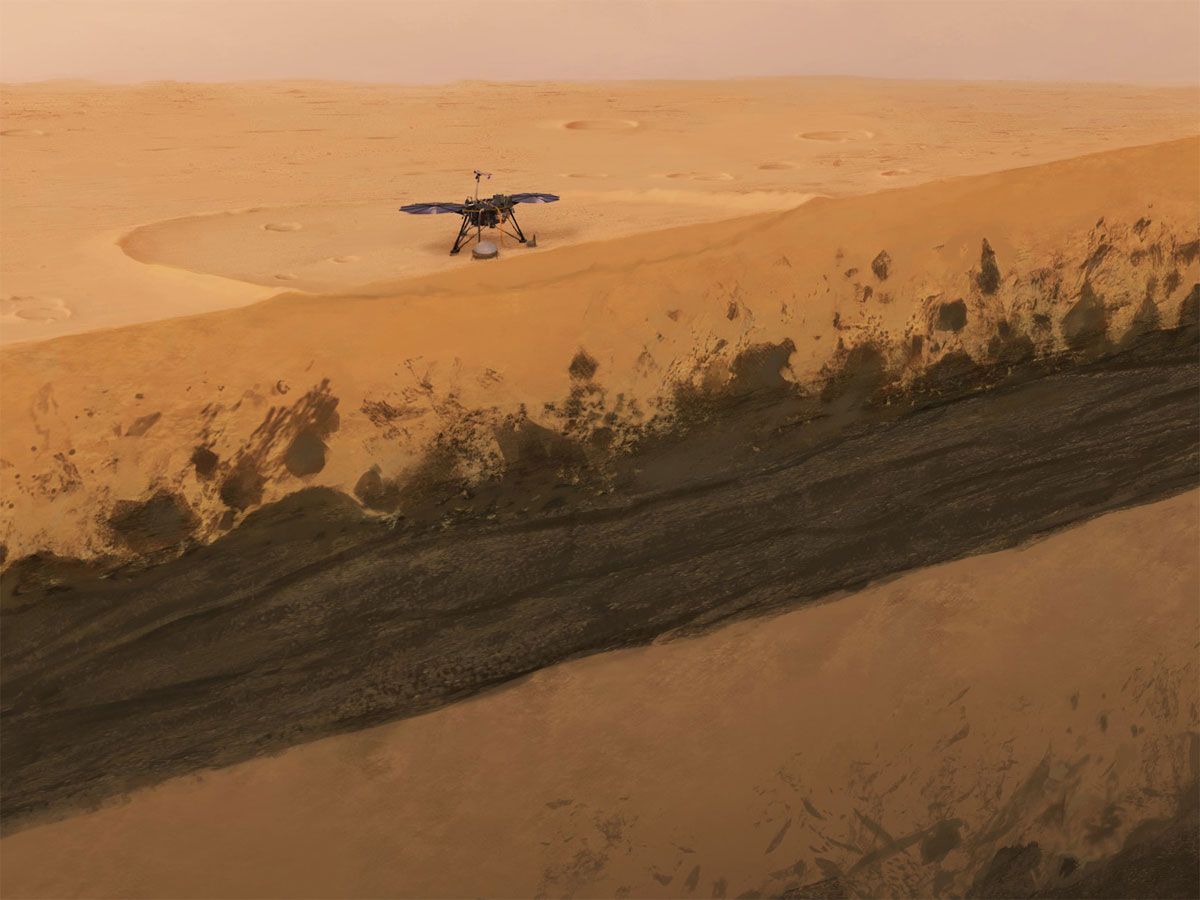 NASA's Mars InSight (Interior Exploration using Seismic Investigations, Geodesy and Heat Transport) lander has developed the first ever map of the underground of the Red Planet by listening to winds.The InSight lander arrived on Mars on November 26, 2018, touching down in the Elysium Planitia region -- the second largest volcanic region on the Red Planet.Geophysicists from ETH Zurich and University of Cologne, used seismic data to analyse the composition of the Elysium Planitia region.The data suggested the presence of a shallow sedimentary layer sandwiched between lava flows beneath the planet's surface.

The findings are published in the journal Nature Communications.The team examined the shallow subsurface to around 200 metres in depth.Right beneath the surface, they discovered a regolith layer of dominantly sandy material approximately three metres thick above a 15 metre layer of coarse blocky ejecta -- rocky blocks that were ejected after a meteorite impact and fell back to the surface.Below these top layers, they identified around 150 metres of basaltic rocks, that is, cooled and solidified lava flows, which was largely consistent with the expected subsurface structure.However, between these lava flows, starting at a depth of about 30 metres, the team identified an additional layer 30 to 40 metres thick with low seismic velocity, suggesting it contains weak sedimentary materials relative to the stronger basalt layers.Further, they found that the shallower lava flows are approximately 1.7 billion years old, forming during the Amazonian period -- a geological era on Mars characterised by low rates of meteorite and asteroid impacts and by cold, hyper-arid conditions, which began approximately 3 billion years ago.In contrast, the deeper basalt layer below the sediments formed much earlier, approximately 3.6 billion years ago during the Hesperian period, which was characterized by widespread volcanic activity.The team proposed that the intermediate layer with low volcanic velocities could be composed of sedimentary deposits sandwiched between the Hesperian and Amazonian basalts, or within the Amazonian basalts themselves."While the results help to better understand the geological processes in Elysium Planitia, comparison with pre-landing models is also valuable for future landed missions, since it can help to refine predictions," said earthquake specialist Dr Brigitte Knapmeyer-Endrun from the University of Cologne.Mars has been the target of numerous planetary science missions, but the InSight mission is the first to specifically measure the subsurface using seismic methods.