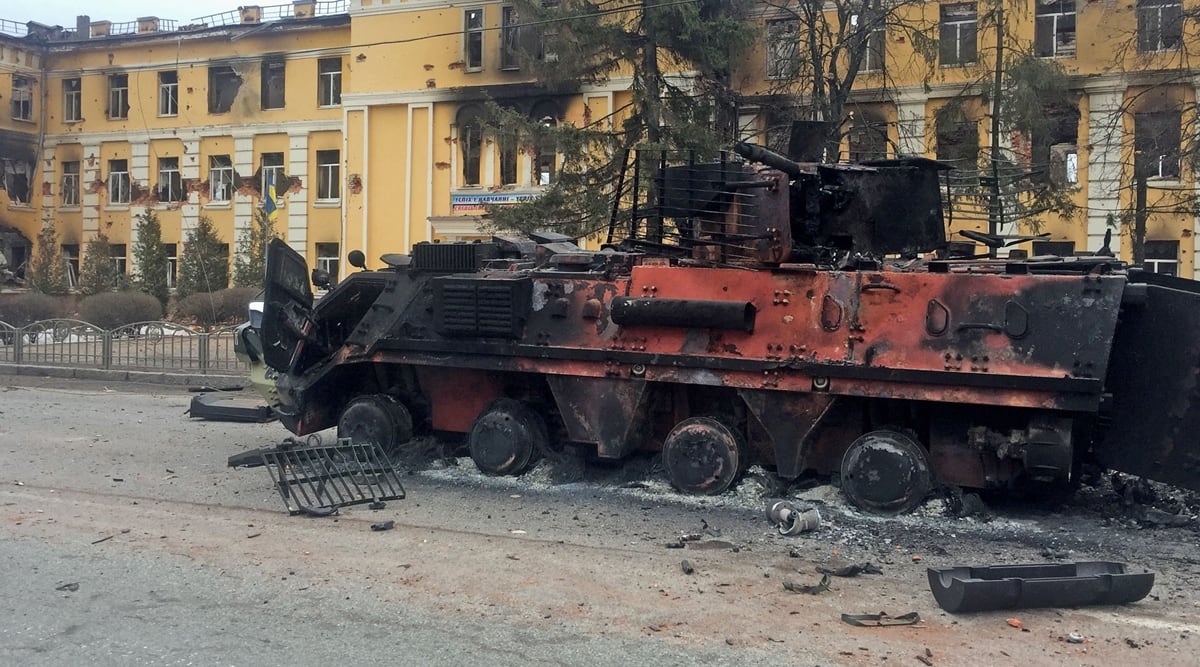 Six days after Russian President Vladimir Putin announced that Moscow will commence a military operation in Ukraine, bloodshed spiralled as Russian missiles rained on Ukrainian cities, including capital Kyiv, second-largest Kharkiv and Zhytomyr. As a part of sanctions against Russia, the United States joined Canada and other Western allies in banning Russian aircrafts over American airspace.India, meanwhile, grieved its first war casualty as a student from Karnataka died in Kharkiv Tuesday. Later in the day, the Foreign Ministry said that all Indian citizens have been evacuated from Kyiv.

Subscribe Now: Get Express Premium to access the best Election reporting and analysisThough representatives of Russia and Ukraine met for talks in Belarus, the discussions yielded little except for a promise to conduct more talks.Here are the top 10 updates on the Russia-Ukraine issue today: US President Joe Biden vowed in his first State of the Union address Tuesday night to check Russian aggression in Ukraine, terming Vladimir Putin a dictator. Biden said that the US Department of Justice is assembling a dedicated task force to go after the crimes of Russian oligarchs. Biden announced that the US is banning Russian flights from its airspace in retaliation for the invasion of Ukraine. The move follows similar action by Canada and the European Union this week. The US ban raises the possibility that Russia could respond by prohibiting US flights over its territory, which would make for longer and more costly flights, especially for cargo carriers. FedEx and UPS both fly over Russia, although they announced this weekend that they were suspending deliveries to that country. India strongly and emphatically asked Ukraine and Russia to create urgent safe passages for the Indian nationals stuck in various conflict zones in Ukraine, after a medical student from Karnataka was killed in intense shelling in the eastern Ukrainian city of Kharkiv. All Indian nationals left Kyiv Tuesday, said Foreign Ministry. It is learnt that most of the officials of the Indian embassy in Kyiv also moved to Lviv in western Ukraine and other locations to help Indians exit the country, but the mission has not been shut down. The ninth flight of Operation Ganga carrying 218 Indian nationals who were stranded in Ukraine reached the national capital from Bucharest Tuesday. As Ukraine has shut its airspace due to the conflict with Russia, India is currently evacuating its nationals by moving them via land routes to the east European countrys neighbours, namely Romania, Hungary, Poland and Slovakia, and then flying them out from there.Continuing our efforts to evacuate stranded citizens back home. #OperationGanga#IndiansInUkraine#Aviation@MoCA_GoI@DrJitendraSinghpic.twitter.com/EY5KHga6pK IndiGo (@IndiGo6E) March 2, 2022Russian forces escalated their attacks on crowded urban areas Tuesday in what Ukraines leader called a blatant campaign of terror. At least 136 civilians have been killed in the bloodshed so far, said the UN human rights council. Ukraines Defense Ministry says it has evidence that Belarus, a Russian ally, is preparing to send troops into Ukraine. The ministry statement, posted on Facebook at midnight, said the Belarussian troops have been brought into combat readiness and are concentrated close to Ukraines northern border. A Russian airstrike hit a residential area near a hospital late Tuesday in Zhytomyr, a city about 140 km west of Ukraines capital, Mayor Serih Sukhomlin said in a Facebook video. Ukraines emergency services said the strike killed at least two people, set three homes on fire and broke the windows in the hospital. Zhytomyr is the home of the elite 95th Air Assault Brigade, which may have been the intended target. Ukrainian President Volodymyr Zelenskyy said Tuesday that Russia should stop its bombardment of Ukraine before more talks on ending the war are held. Ukrainian and Russian officials have held one round of talks since the six-day-long war began and reportedly are planning more. Ukraine has effectively asked that Russia be kicked off the internet. In a letter sent Monday to the president of the Internet Corporation for Assigned Names and Numbers, Ukraines deputy minister for digital transformation, Mykhailo Fedorov, cited the atrocious crimes of Russias invasion, including its alleged breach of the Geneva Conventions in attacking civilian targets. Federov asked that ICANN revoke, permanently or temporarily, the domains .ru and .su and shut down the root servers in Moscow and St. Petersburg that match domain names and numbers. Russian President Vladimir Putin Tuesday signed a decree that prohibits taking more than $10,000 worth of foreign currency in cash and monetary instruments out of Russia. The move comes in response to the crippling sanctions Western nations have imposed on Russia over its invasion of Ukraine, which this week tanked the ruble and sent Russians flocking to banks and ATM in fear for the fate of their savings. Other measures Putin ordered this week included obligating Russian exporters to sell 80% of their revenues in foreign currency, prohibiting Russian residents from providing non-residents with foreign currency under loan agreements and from depositing foreign currency into foreign bank accounts.(With inputs from Reuters and the Associated Press reports) 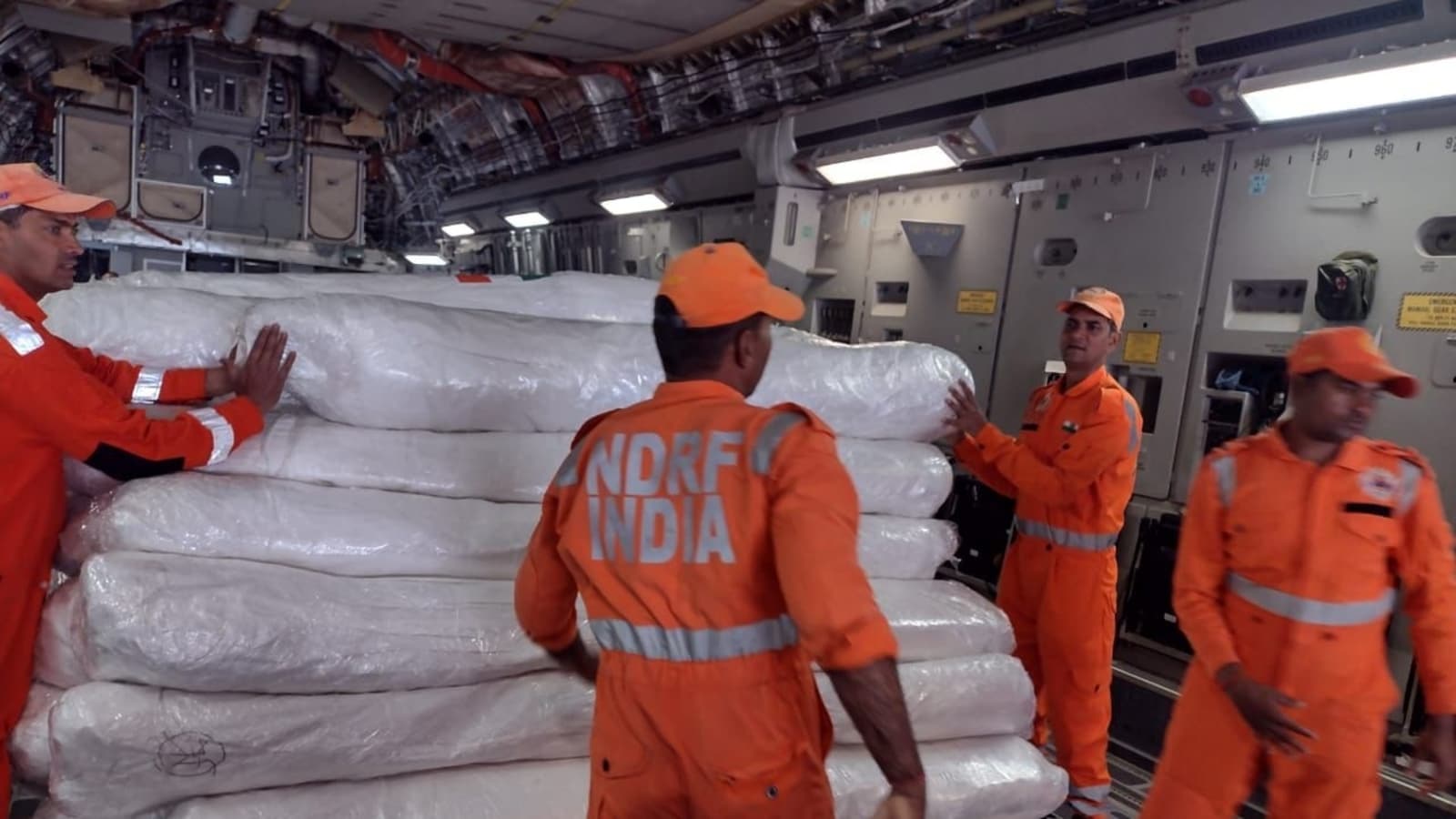