Kherson, a port city in Ukraine, was taken over by Russian forces on Wednesday as the Kremlins invasion of its neighbour turned more brutal on its seventh day.According to a report by Interfax, Russias defence ministry said its forces had captured Kherson. The city governor earlier said Kherson was completely surrounded by Russians.Russia said it would press forward with its military advances in Ukraine. Its assault on the countrys second-largest city, Kharkiv, continued on Wednesday with its mayor stating residential areas were being bombed.

Four more persons were killed and nine others were injured in shelling during the day, the emergencies services said.Videos circulating online of an apparent attack on the regional police and intelligence headquarters in Kharkiv, showed a building with its roof blown off and its top floor on fire. Pieces of the five-story building are strewn across adjacent streets.Nobody will forgive. Nobody will forget, Ukraines President Volodymyr Zelenskyy vowed amid the bloodshed.Live updates on Ukraine-Russia conflictThe Ukrainian governments center for strategic communications released images Wednesday of strikes hitting Kharkiv, with balls of fire lighting up the city skyline over populated areas.In his first State of the Union address, US President Joe Biden called his Russian counterpart Vladimir Putin a dictator, and said the latter would pay a high price for his invasion of Ukraine. Biden also spoke to Ukrainian President Volodymyr Zelenskiy about the escalation of attacks.Also read | UN General Assembly draws closer to demanding Russia withdraw from UkraineMeanwhile, Chinas foreign minister said Beijing is extremely concerned about the harm to civilians. It said one of its citizens was shot and injured while evacuating from the war-torn nation.Foreign Ministry spokesperson Wang Wenbin said the incident occurred on Tuesday while the person was leaving on their own. The Chinese Embassy in Kyiv immediately contacted the person to provide assistance.(With inputs from agencies)
India vs Sri Lanka 1st Test: Rohit Sharma takes reins as Ind 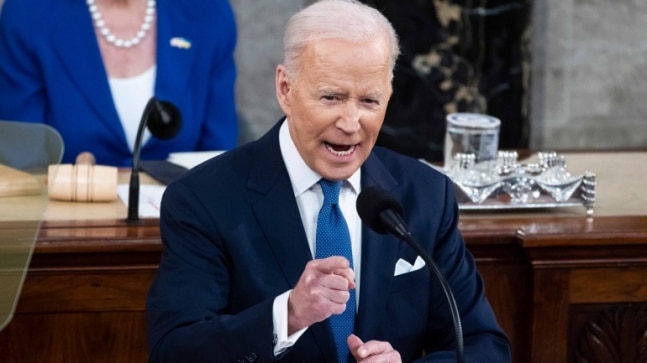 Did US President Joe Biden mispronounce Ukrainian as â€˜Iran