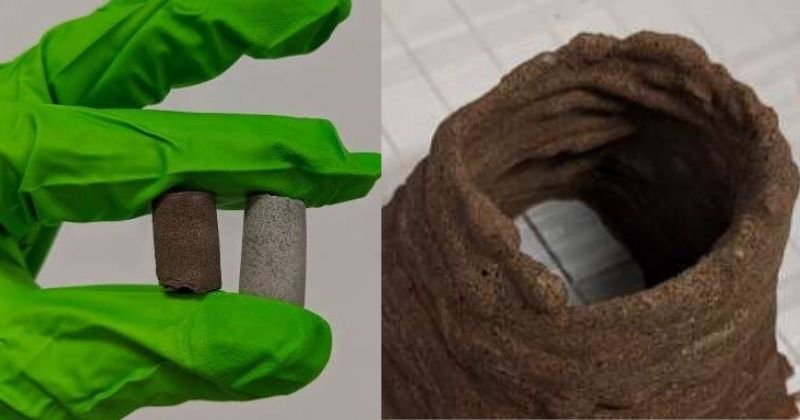 Scientists have developed a special concrete using human blood and urine that could help astronauts build human colonies on Mars.Material Today BioAlso Read:Look Up The Night Sky As If You Are Standing On Mars, With NASA Perseverance RoverThis is according to a study published in Materials Today Bio. The special concrete has been developed by researchers at the University of Manchester using extra-terrestrial dust as well as a protein from the human blood, fused with a compound from urine, sweat or tears.Sending a single brick of concrete on Mars would cost a whopping $2 million, meaning engineers would have to get creative with the materials that theyd have in their hands on Mars.The human blood plasma has a protein dubbed human serum albumin that acts as a binder for simulated Moon or Mars dust to create a concrete-like material.

The end material dubbed AstroCrete had strengths of 25MPa (Megapascals) -- similar to the concrete we use today (ranging from 20MPa to 32MPa).However, researchers discovered that by adding urea to the mix -- essentially a biological waste product released by the body in urine, sweat and tears -- could increase this aforementioned strength by a whopping 300 percent -- possessing a compressive strength of almost 40 MPa.Also Read:NASA Perseverance Rover's Rock Samples Suggest Alien Life Existed On MarsThis works as the blood proteins denature, or "curdle," to form an extended structure with interactions known as "beta-sheets" that hold on to the material together.Materials Today BioDr Aled Roberts, from The University of Manchester, explains, "Scientists have been trying to develop viable technologies to produce concrete-like materials on the surface of Mars, but we never stopped to think that the answer might be inside us all along."Also Read:Mars Still Has Oceans Of Water Buried Beneath Surface, Study FindsAccording to the scientists, over 500 kilograms of high-strength AstroCrete can be produced on a two-year Mars mission by a crew of six astronauts. If used in the form of a mortar for sandbags or heat-fused regolith bricks, each crew member could produce enough AstroCrete to expand the habitat for supporting an additional crew member, doubling the housing available.What do you think of this novel building technique for houses on Mars and the ingredients used in the concrete mix? Let us know in the comments below, and keep reading Indiatimes.com for the latest science and technology news.