US doubles down on vax efforts amid Covid resurgence - Lokmat 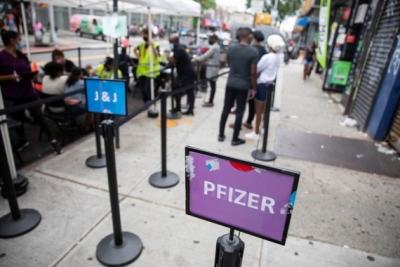 Washington, Sep 14 The US federal government is doubling down on Covid-19 inoculation efforts, including an ongoing plan for booster shots, while more unvaccinated people fell victims to the highly-transmissible Delta variant amid the latest resurgence.A surge in Covid-19 deaths caused by the Delta variant is hitting working-age people hard while highlighting the risks for people who remain unvaccinated, Xinhua news agency quoted The Wall Street Journal (WSJ) as saying in a report on Monday.Federal data revealed that Covid-19 deaths among people under 55 have roughly matched highs near 1,800 a week set during last winter's surge, said the report. It also showed weekly tallies for overall Covid-19 deaths, meanwhile, remain well under half of the pandemic peak near 26,000 reached in January.The seven-day average for newly reported deaths each day recently eclipsed 1,600, up from an average that briefly moved below 220 a day in early July. With a total of 661,537 Covid fatalities till date, the US is on track to "soon top the estimated 675,000 deaths that the Centers for Disease Control and Prevention (CDC) has linked to the 1918-19 flu pandemic", The WSJ report added.

High vaccination rates among the elderly, who are more vulnerable to severe Covid-19 outcomes, are restraining the overall increase in deaths, and the change is shifting a larger share of deaths to younger populations with lower vaccination rates, underscoring the need to get more people inoculated to curb the pandemic, WSJ quoted experts as saying.Deaths have been concentrated among the unvaccinated, federal data show. The CDC released studies on September 10 showing that unvaccinated Americans were 4.6 times as likely to be infected, 10 times as likely to be hospitalised and 11 times as likely to die.Another WSJ report on Monday quoting virologists and epidemiologists said that Covid-19 may become a routine illness like a common cold or the flu one day in the US. But it will take a lot to get there, and the ferocious spread of the Delta variant that has filled hospitals again showed how challenging that path could be."While surges are easing in some states, cases are rising in others. Delta is moving the world toward immunity against the virus at huge cost. "With every new infection it is raising the risk of incubating a variant that might spread even faster, sicken with greater ferocity or evade vaccines," said the report.Scientists are trying to figure out whether SARS-CoV-2 will form deadlier or more contagious new variants, and how the pandemic might end. Their best-case scenario isn't anything as hopeful as eradication, it added."Instead, many expect Covid-19 will become a routine disease like a common cold or the flu, rather than a cause of mass hospitalisations and deaths."In related development, Covid-19 vaccine boosters could begin to be available in a week to all fully vaccinated Americans, but exactly who will be eligible and when won't be decided until two key scientific advisory committees meet days before the US administration's September 20 start date, USA Today reported on Monday.Initially, President Joe Biden said a third shot booster dose for people with healthy immune systems would be offered beginning September 20 to anyone who had gotten their second shot of either the Pfizer-BioNTech or Moderna vaccine at least eight months ago, pending authorisation from the Food and Drug Administration.Of the eligible population in the US, which is currently limited to people 12 and older, 63 per cent are fully vaccinated, according to the CDC. Disclaimer: This post has been auto-published from an agency feed without any modifications to the text and has not been reviewed by an editorOpen in app